Characters in the Play Othello 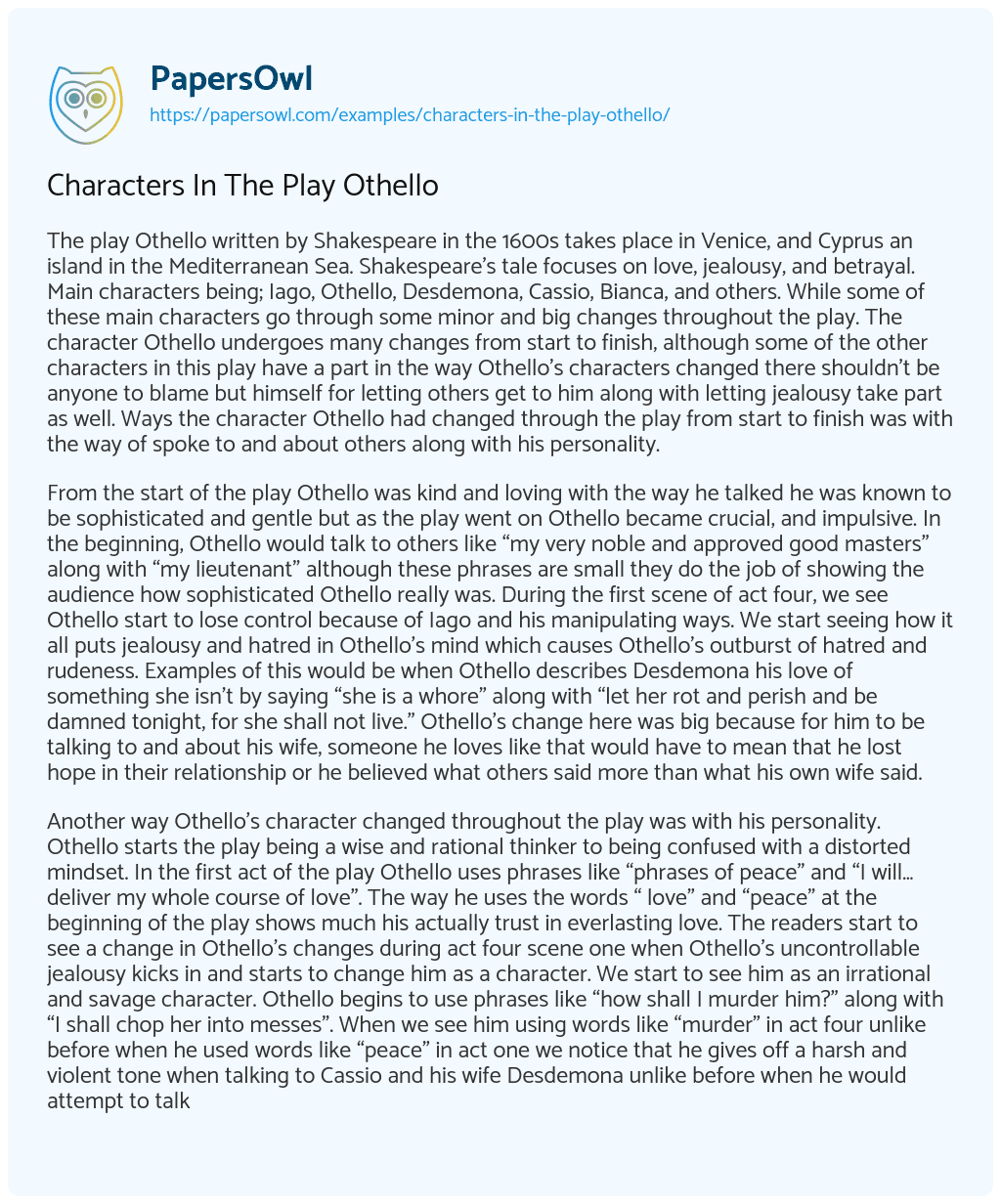 The play Othello written by Shakespeare in the 1600s takes place in Venice, and Cyprus an island in the Mediterranean Sea. Shakespeare’s tale focuses on love, jealousy, and betrayal. Main characters being; Iago, Othello, Desdemona, Cassio, Bianca, and others. While some of these main characters go through some minor and big changes throughout the play. The character Othello undergoes many changes from start to finish, although some of the other characters in this play have a part in the way Othello’s characters changed there shouldn’t be anyone to blame but himself for letting others get to him along with letting jealousy take part as well. Ways the character Othello had changed through the play from start to finish was with the way of spoke to and about others along with his personality.

From the start of the play Othello was kind and loving with the way he talked he was known to be sophisticated and gentle but as the play went on Othello became crucial, and impulsive. In the beginning, Othello would talk to others like “my very noble and approved good masters” along with “my lieutenant” although these phrases are small they do the job of showing the audience how sophisticated Othello really was. During the first scene of act four, we see Othello start to lose control because of Iago and his manipulating ways. We start seeing how it all puts jealousy and hatred in Othello’s mind which causes Othello’s outburst of hatred and rudeness. Examples of this would be when Othello describes Desdemona his love of something she isn’t by saying “she is a whore” along with “let her rot and perish and be damned tonight, for she shall not live.” Othello’s change here was big because for him to be talking to and about his wife, someone he loves like that would have to mean that he lost hope in their relationship or he believed what others said more than what his own wife said.

Another way Othello’s character changed throughout the play was with his personality. Othello starts the play being a wise and rational thinker to being confused with a distorted mindset. In the first act of the play Othello uses phrases like “phrases of peace” and “I will… deliver my whole course of love”. The way he uses the words “ love” and “peace” at the beginning of the play shows much his actually trust in everlasting love. The readers start to see a change in Othello’s changes during act four scene one when Othello’s uncontrollable jealousy kicks in and starts to change him as a character. We start to see him as an irrational and savage character. Othello begins to use phrases like “how shall I murder him?” along with “I shall chop her into messes”. When we see him using words like “murder” in act four unlike before when he used words like “peace” in act one we notice that he gives off a harsh and violent tone when talking to Cassio and his wife Desdemona unlike before when he would attempt to talk to these characters kindly and calmly.

From the beginning of the play to the end of the play the character Othello does change in many ways. Having to compare what this character started off like in the play to how he ended can be shown with many examples. What the character went through showed a way of the metamorphosis of a single person, but how evil can take over and replace the good in a person when one is faced with jealousy and misunderstandings. We also see as an audience that manipulation can really take over a person which will show how it can change the way individuals act in certain situations. That being said manipulation is one of many things that was also shown many times throughout the play, Othello.

Characters In The Play Othello. (2019, May 18). Retrieved from https://papersowl.com/examples/characters-in-the-play-othello/

Deaths of Characters in Othello

Othello and his Actions in the Play