Deaths of Characters in Othello 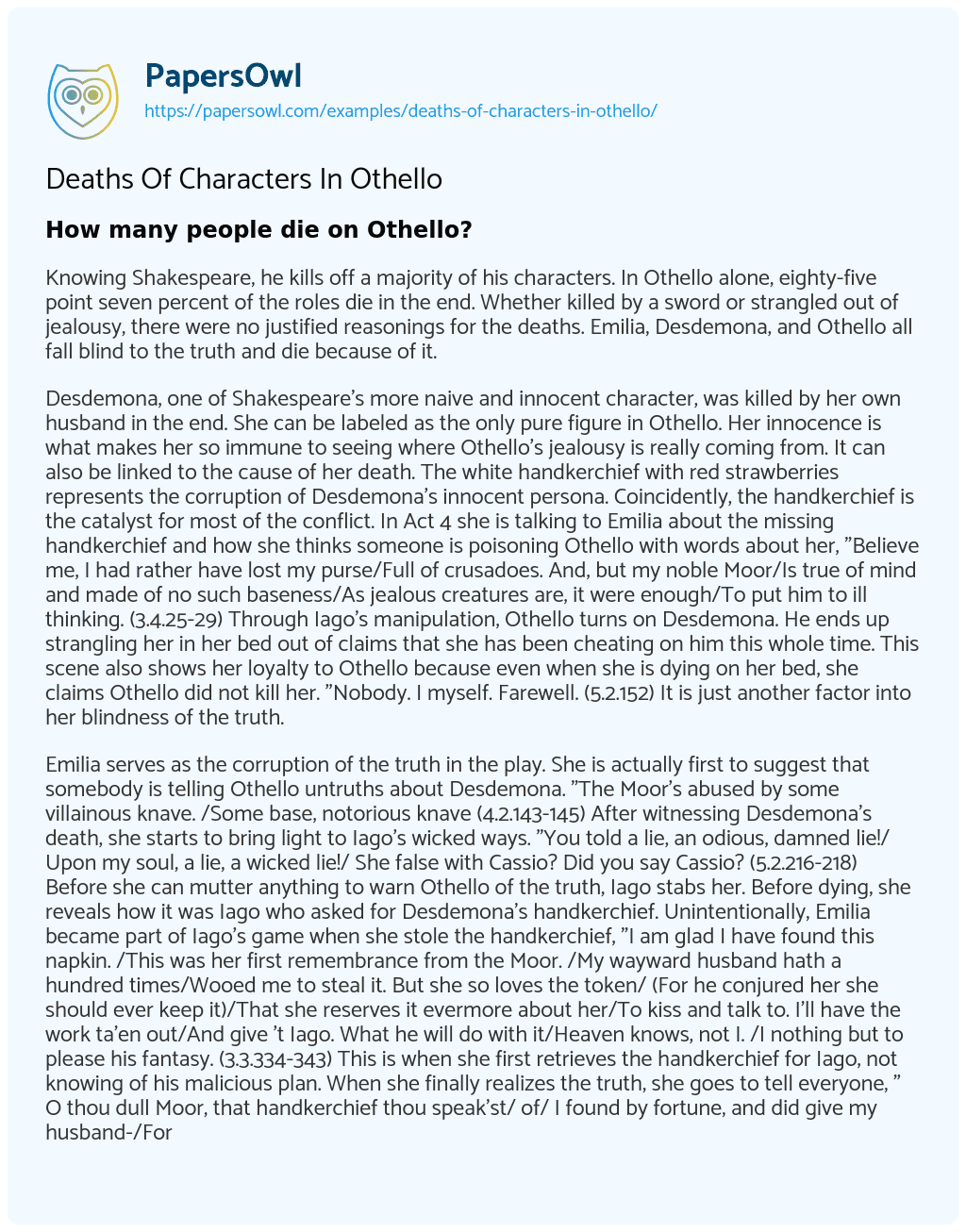 How many people die on Othello?

Knowing Shakespeare, he kills off a majority of his characters. In Othello alone, eighty-five point seven percent of the roles die in the end. Whether killed by a sword or strangled out of jealousy, there were no justified reasonings for the deaths. Emilia, Desdemona, and Othello all fall blind to the truth and die because of it.

Desdemona, one of Shakespeare’s more naive and innocent character, was killed by her own husband in the end. She can be labeled as the only pure figure in Othello. Her innocence is what makes her so immune to seeing where Othello’s jealousy is really coming from. It can also be linked to the cause of her death. The white handkerchief with red strawberries represents the corruption of Desdemona’s innocent persona. Coincidently, the handkerchief is the catalyst for most of the conflict. In Act 4 she is talking to Emilia about the missing handkerchief and how she thinks someone is poisoning Othello with words about her, “Believe me, I had rather have lost my purse/Full of crusadoes. And, but my noble Moor/Is true of mind and made of no such baseness/As jealous creatures are, it were enough/To put him to ill thinking. (3.4.25-29) Through Iago’s manipulation, Othello turns on Desdemona. He ends up strangling her in her bed out of claims that she has been cheating on him this whole time. This scene also shows her loyalty to Othello because even when she is dying on her bed, she claims Othello did not kill her. “Nobody. I myself. Farewell. (5.2.152) It is just another factor into her blindness of the truth.

Emilia serves as the corruption of the truth in the play. She is actually first to suggest that somebody is telling Othello untruths about Desdemona. “The Moor’s abused by some villainous knave. /Some base, notorious knave (4.2.143-145) After witnessing Desdemona’s death, she starts to bring light to Iago’s wicked ways. “You told a lie, an odious, damned lie!/ Upon my soul, a lie, a wicked lie!/ She false with Cassio? Did you say Cassio? (5.2.216-218) Before she can mutter anything to warn Othello of the truth, Iago stabs her. Before dying, she reveals how it was Iago who asked for Desdemona’s handkerchief. Unintentionally, Emilia became part of Iago’s game when she stole the handkerchief, “I am glad I have found this napkin. /This was her first remembrance from the Moor. /My wayward husband hath a hundred times/Wooed me to steal it. But she so loves the token/ (For he conjured her she should ever keep it)/That she reserves it evermore about her/To kiss and talk to. I’ll have the work ta’en out/And give ‘t Iago. What he will do with it/Heaven knows, not I. /I nothing but to please his fantasy. (3.3.334-343) This is when she first retrieves the handkerchief for Iago, not knowing of his malicious plan. When she finally realizes the truth, she goes to tell everyone, ” O thou dull Moor, that handkerchief thou speak’st/ of/ I found by fortune, and did give my husband-/For often, with a solemn earnestness/ ( More than indeed belonged to such a trifle)/He begged of me to steal’t/ (5.2.266-272)

From once a great and honest man to one who slaps his wife in public and then murders her, Othello was the definition of a fall from grace. Iago is easily able to manipulate Othello throughout the whole play. Othello must start to realize that he can’t run his marriage using the same unbending discipline and militaristic thinking he uses to rule his soldiers.  He must start to question Iago’s motives for accusing Desdemona of being unfaithful, and look beyond the surface of events for their true meaning and greater implications. Othello struggles with the idea that Desdemona is unfaithful. At first he refuses to believe it and he demands proof; he flusters Desdemona when she cannot produce a handkerchief he has given her, he “overhears Cassio speaking of his affair with Desdemona; he sees the handkerchief in the hands of Cassio’s mistress. In the end, he has no option but to kill her. Othello is driven mad and Desdemona can see it in his eyes, ” And yet I fear you, for you’re fatal then/When your eyes roll so. Why I should fear I know/not,/Since guiltiness I know not, but yet I feel I fear. (5.2.44-47) To his dismine, he is easily blinded by anger and betrayal. He ends up taking his own life out of remorse for Desdemona’s death. Showing remorse is something Iago never does after killing his wife, this goes to reveal what kind of man Othello is, “I kissed thee ere I killed thee. No way but this,/Killing myself to die upon a kiss/ (5.2.420-421)   This shows he is a moral and just man, ” When you shall these unlucky deeds relate,/Speak of me as I am. Nothing extenuate,/Nor set down aught in malice. (5.2.401-403)  As many do not think his death was innocent because of his murder of Desdemona, it does shine through as innocent. Iago’s manipulation was so precise and was able to be brought back up with factual evidence,handkerchief, that any just man would believe was he was being told. Othello’s only flaw was acting unjustly on the assumption and killing his wife. With the showing of remorse, it is easy to see he was blinded by manipulation and sees that in the end. Sadly enough, it is too late.

All just but a pawn in Iago’s game of manipulation, he ends up winning and taking the life of three innocent characters. Invalid as they are, the play showed the fall of grace,innocence, and the truth. Through all these innocent deaths, a lesson can be taught. Never trust an honest Iago.

Deaths Of Characters In Othello. (2019, Feb 03). Retrieved from https://papersowl.com/examples/deaths-of-characters-in-othello/