Othello as an Ideal Representation of the Tragic Hero 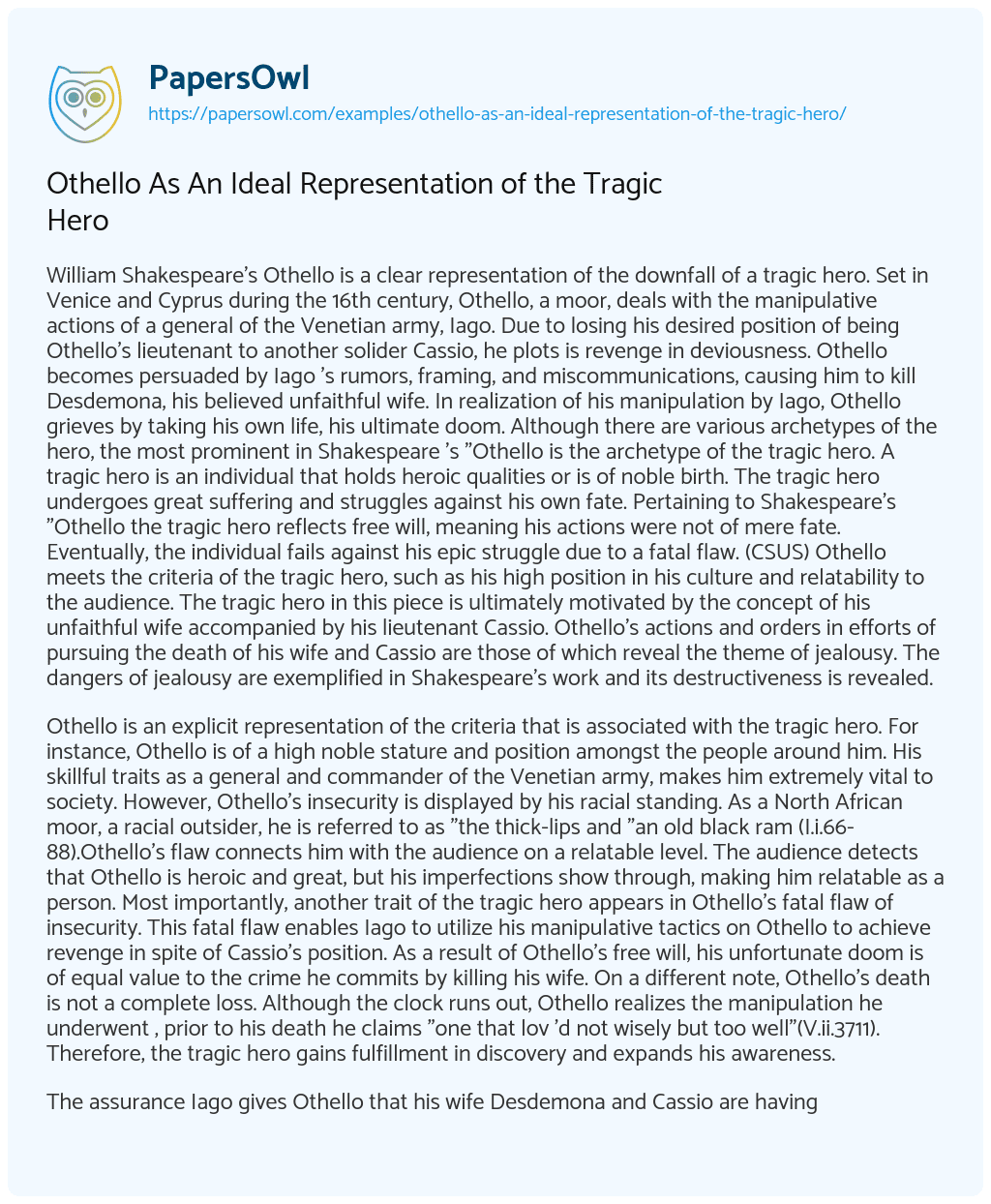 William Shakespeare’s Othello is a clear representation of the downfall of a tragic hero. Set in Venice and Cyprus during the 16th century, Othello, a moor, deals with the manipulative actions of a general of the Venetian army, Iago. Due to losing his desired position of being Othello’s lieutenant to another solider Cassio, he plots is revenge in deviousness. Othello becomes persuaded by Iago ‘s rumors, framing, and miscommunications, causing him to kill Desdemona, his believed unfaithful wife. In realization of his manipulation by Iago, Othello grieves by taking his own life, his ultimate doom. Although there are various archetypes of the hero, the most prominent in Shakespeare ‘s “Othello is the archetype of the tragic hero. A tragic hero is an individual that holds heroic qualities or is of noble birth. The tragic hero undergoes great suffering and struggles against his own fate. Pertaining to Shakespeare’s “Othello the tragic hero reflects free will, meaning his actions were not of mere fate. Eventually, the individual fails against his epic struggle due to a fatal flaw. (CSUS) Othello meets the criteria of the tragic hero, such as his high position in his culture and relatability to the audience. The tragic hero in this piece is ultimately motivated by the concept of his unfaithful wife accompanied by his lieutenant Cassio. Othello’s actions and orders in efforts of pursuing the death of his wife and Cassio are those of which reveal the theme of jealousy. The dangers of jealousy are exemplified in Shakespeare’s work and its destructiveness is revealed.

Othello is an explicit representation of the criteria that is associated with the tragic hero. For instance, Othello is of a high noble stature and position amongst the people around him. His skillful traits as a general and commander of the Venetian army, makes him extremely vital to society. However, Othello’s insecurity is displayed by his racial standing. As a North African moor, a racial outsider, he is referred to as “the thick-lips and “an old black ram (I.i.66-88).Othello’s flaw connects him with the audience on a relatable level. The audience detects that Othello is heroic and great, but his imperfections show through, making him relatable as a person. Most importantly, another trait of the tragic hero appears in Othello’s fatal flaw of insecurity. This fatal flaw enables Iago to utilize his manipulative tactics on Othello to achieve revenge in spite of Cassio’s position. As a result of Othello’s free will, his unfortunate doom is of equal value to the crime he commits by killing his wife. On a different note, Othello’s death is not a complete loss. Although the clock runs out, Othello realizes the manipulation he underwent , prior to his death he claims “one that lov ‘d not wisely but too well”(V.ii.3711). Therefore, the tragic hero gains fulfillment in discovery and expands his awareness.

The assurance Iago gives Othello that his wife Desdemona and Cassio are having an affair, is a mere vocal accusation that drives Othello’s motivation throughout the play that affects both his self esteem and dignity. Taking into consideration that racism is an immensely influential factor in Shakespeare’s work, interracial marriage was unheard of during this time period. Othello’s position as a general enables him to increase his pride not only as a racial outsider, but also as one who pursued Desdemona ‘s love.There is an underlying sense that Othello believes he is not worthy and incomparable to Desdemona, a lady noble birth. Nevertheless Desdemona finds Othello appealing due to his exotic qualities and difference amongst the Venetians. Also, Othello is quite savvy with words. For example, Othello pursues Desdemona and her father by saying to the Duke, “Her father loved me, oft invited me, Still questioned me the story of my life From year to year(I.ii.473-475). From this, Othello enthralls the audience and his peers, as shown when the duke replies, “I think this tale would win my daughter too(I.ii.516). Despite his appeals, when Othello was informed that Desdemona committed adulterous actions, he fits the role of a lover with a injured heart. Overall, this feeling of betrayal sinks deeper by damaging his already compromised self esteem and pride.

Evidently, Othello’s actions and values presented in the play reflect various aspects of jealousy. Shakespeare’s work “Othello emphasizes the dangers of jealousy. The play demonstrates how jealousy is powered by affirmations that can easily be proven false. Therefore, resulting in the destruction of many lives, including the tragic hero himself. It is extremely apparent that jealousy is a behavioral propellant on the entire plot. Specifically, the play begins in the midst of Iago’s jealous behavior towards Cassio. Lago’s twisted actions refer to the source of jealousy, indicating that he takes revenge on the people around him and is the least discontent with the lives he damages. As the play progresses, both the tragic hero and Iago’s jealous behavior develops. Othello’s Moorish values make him obscure in comparison to other Venetians suggests that the reason for his jealousy is unreasonable. Notably, Shakespeare exhibits that jealousy is unreasonable throughout the play as a result of the tragic hero’s fatal flaw, an issue that is psychological. The action and behavior Othello performs in enviousness is not a source of a reasonable act of jealousy.

Overall, William Shakespeare’s Othello is an ideal representation of the tragic hero. Othello’s manipulation reveals his true self, displaying his fatal flaw of insecurity and jealousy destructiveness. However, to spark this destructive rampage, Iago is also a main source to the tragic hero’s connection to the theme of jealousy. By ultimately portraying the traits of a tragic hero, Othello’s shameful death is a result of his nature in response to various forms of jealousy, such as spousal distrust and competition

Othello As An Ideal Representation of the Tragic Hero. (2019, Mar 14). Retrieved from https://papersowl.com/examples/othello-as-an-ideal-representation-of-the-tragic-hero/