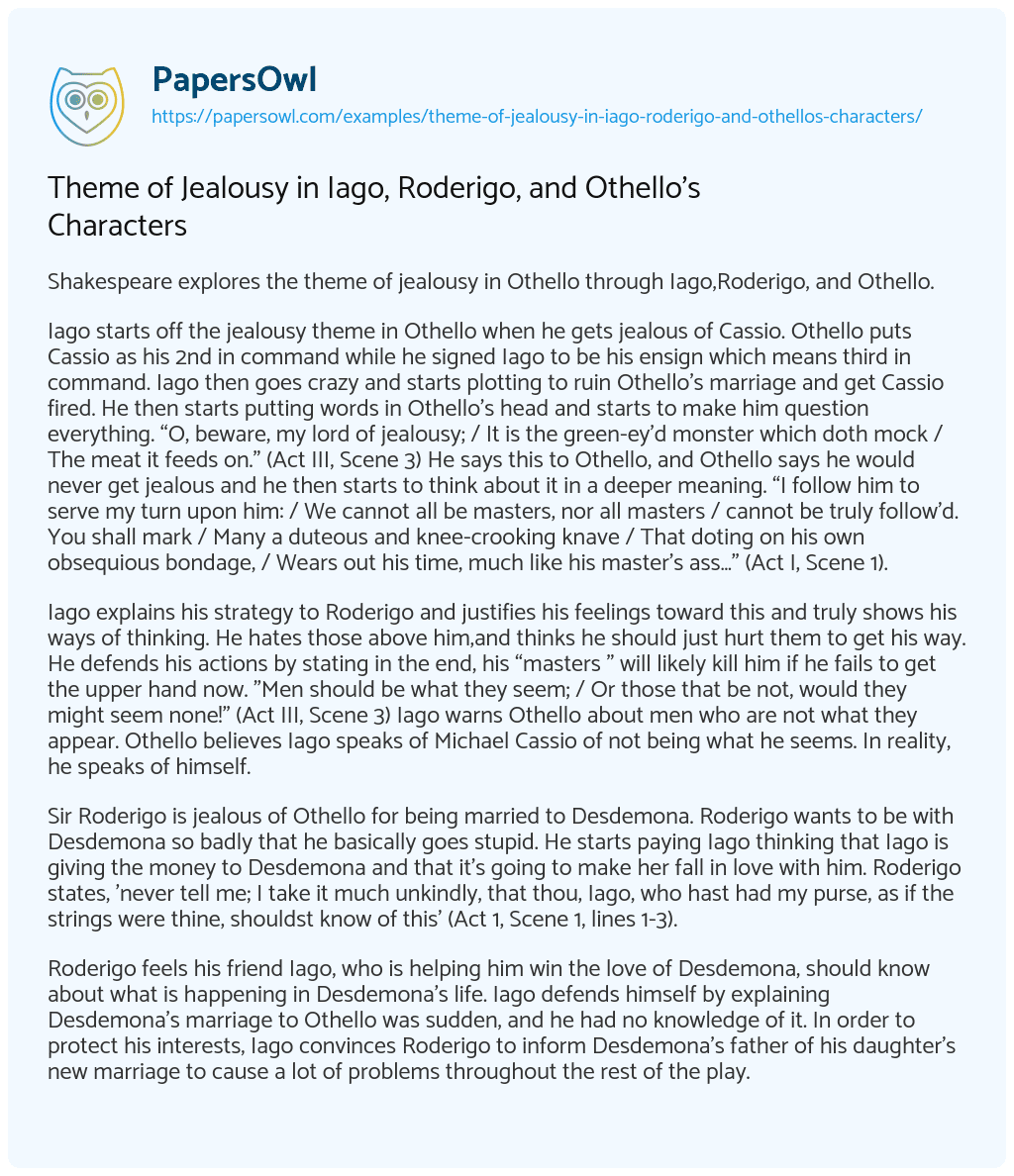 Shakespeare explores the theme of jealousy in Othello through Iago,Roderigo, and Othello.

Iago starts off the jealousy theme in Othello when he gets jealous of Cassio. Othello puts Cassio as his 2nd in command while he signed Iago to be his ensign which means third in command. Iago then goes crazy and starts plotting to ruin Othello’s marriage and get Cassio fired. He then starts putting words in Othello’s head and starts to make him question everything. “O, beware, my lord of jealousy; / It is the green-ey’d monster which doth mock / The meat it feeds on.” (Act III, Scene 3) He says this to Othello, and Othello says he would never get jealous and he then starts to think about it in a deeper meaning. “I follow him to serve my turn upon him: / We cannot all be masters, nor all masters / cannot be truly follow’d. You shall mark / Many a duteous and knee-crooking knave / That doting on his own obsequious bondage, / Wears out his time, much like his master’s ass…” (Act I, Scene 1).

Iago explains his strategy to Roderigo and justifies his feelings toward this and truly shows his ways of thinking. He hates those above him,and thinks he should just hurt them to get his way. He defends his actions by stating in the end, his “masters ” will likely kill him if he fails to get the upper hand now. “Men should be what they seem; / Or those that be not, would they might seem none!” (Act III, Scene 3) Iago warns Othello about men who are not what they appear. Othello believes Iago speaks of Michael Cassio of not being what he seems. In reality, he speaks of himself.

Sir Roderigo is jealous of Othello for being married to Desdemona. Roderigo wants to be with Desdemona so badly that he basically goes stupid. He starts paying Iago thinking that Iago is giving the money to Desdemona and that it’s going to make her fall in love with him. Roderigo states, ‘never tell me; I take it much unkindly, that thou, Iago, who hast had my purse, as if the strings were thine, shouldst know of this’ (Act 1, Scene 1, lines 1-3).

Roderigo feels his friend Iago, who is helping him win the love of Desdemona, should know about what is happening in Desdemona’s life. Iago defends himself by explaining Desdemona’s marriage to Othello was sudden, and he had no knowledge of it. In order to protect his interests, Iago convinces Roderigo to inform Desdemona’s father of his daughter’s new marriage to cause a lot of problems throughout the rest of the play.

Theme of Jealousy in Iago, Roderigo, and Othello's Characters. (2019, Apr 16). Retrieved from https://papersowl.com/examples/theme-of-jealousy-in-iago-roderigo-and-othellos-characters/

Characters in the Play Othello