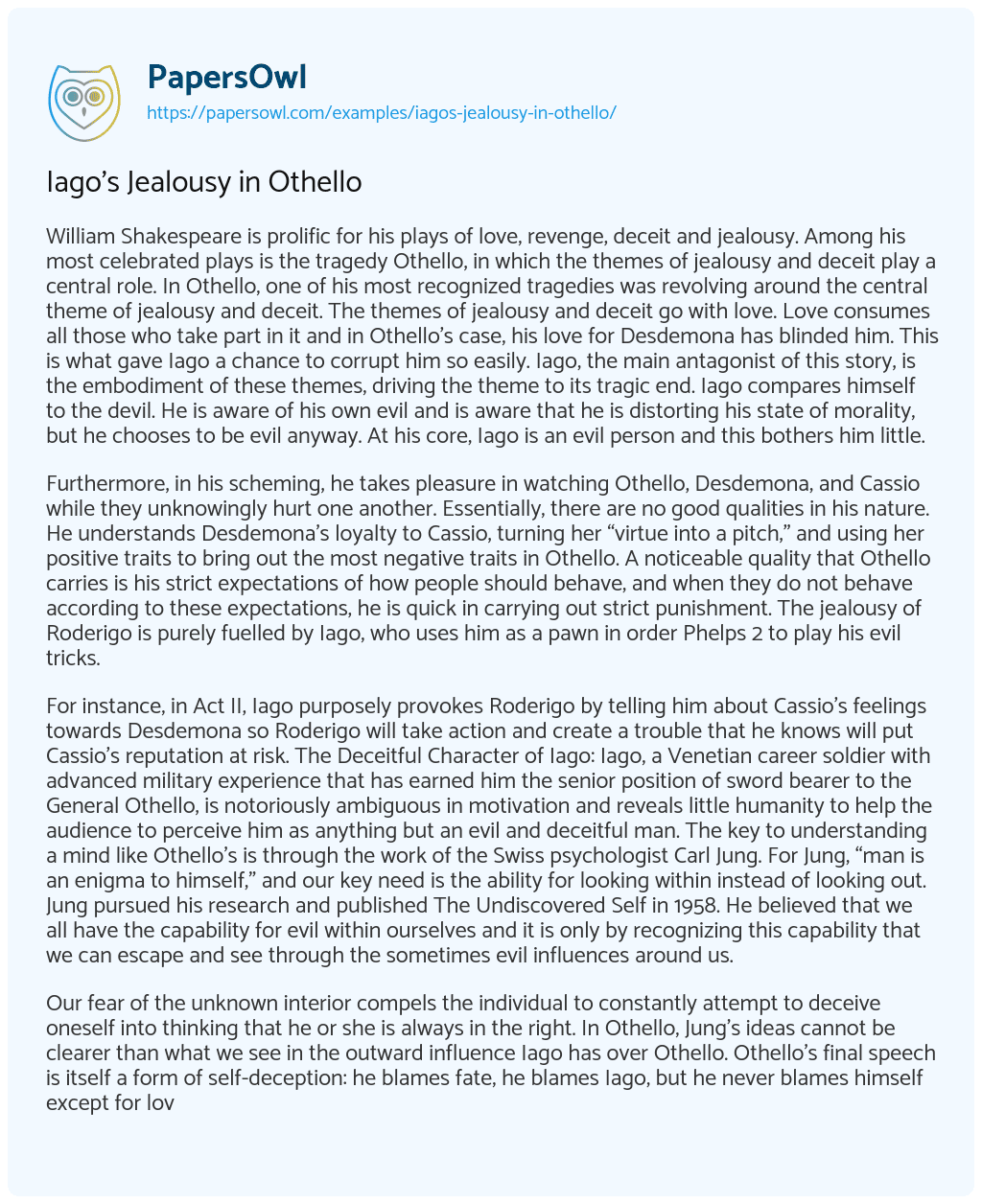 William Shakespeare is prolific for his plays of love, revenge, deceit and jealousy. Among his most celebrated plays is the tragedy Othello, in which the themes of jealousy and deceit play a central role. In Othello, one of his most recognized tragedies was revolving around the central theme of jealousy and deceit. The themes of jealousy and deceit go with love. Love consumes all those who take part in it and in Othello’s case, his love for Desdemona has blinded him. This is what gave Iago a chance to corrupt him so easily. Iago, the main antagonist of this story, is the embodiment of these themes, driving the theme to its tragic end. Iago compares himself to the devil. He is aware of his own evil and is aware that he is distorting his state of morality, but he chooses to be evil anyway. At his core, Iago is an evil person and this bothers him little.

Furthermore, in his scheming, he takes pleasure in watching Othello, Desdemona, and Cassio while they unknowingly hurt one another. Essentially, there are no good qualities in his nature. He understands Desdemona’s loyalty to Cassio, turning her “virtue into a pitch,” and using her positive traits to bring out the most negative traits in Othello. A noticeable quality that Othello carries is his strict expectations of how people should behave, and when they do not behave according to these expectations, he is quick in carrying out strict punishment. The jealousy of Roderigo is purely fuelled by Iago, who uses him as a pawn in order Phelps 2 to play his evil tricks.

For instance, in Act II, Iago purposely provokes Roderigo by telling him about Cassio’s feelings towards Desdemona so Roderigo will take action and create a trouble that he knows will put Cassio’s reputation at risk. The Deceitful Character of Iago: Iago, a Venetian career soldier with advanced military experience that has earned him the senior position of sword bearer to the General Othello, is notoriously ambiguous in motivation and reveals little humanity to help the audience to perceive him as anything but an evil and deceitful man. The key to understanding a mind like Othello’s is through the work of the Swiss psychologist Carl Jung. For Jung, “man is an enigma to himself,” and our key need is the ability for looking within instead of looking out. Jung pursued his research and published The Undiscovered Self in 1958. He believed that we all have the capability for evil within ourselves and it is only by recognizing this capability that we can escape and see through the sometimes evil influences around us.

Our fear of the unknown interior compels the individual to constantly attempt to deceive oneself into thinking that he or she is always in the right. In Othello, Jung’s ideas cannot be clearer than what we see in the outward influence Iago has over Othello. Othello’s final speech is itself a form of self-deception: he blames fate, he blames Iago, but he never blames himself except for loving “too well” because of the lack of the power of introspection. “Of one that loved not wisely but too well; Of one not easily jealous, but being wrought” (Act V). He turns an obvious negative into a positive, further reinforcing the defenses that he uses to direct responsibility elsewhere as opposed to his own psychological make-up. In his book Magic in the Web, Heilman explores the nature of Othello’s and Desdemona’s love which provokes Iago’s attempt to destroy it due to his own inability to love. Iago views love as a form of witchcraft, something that he cannot understand or control. Iago possesses little emotion Phelps 3 other than bitterness and hate, “Good sense, hard sense, common sense, no nonsense, rationality—all these terms we may suppose, are ones which Iago might consider as defining his perspective” (133).

It is never really clear whether Iago has any kind of self-awareness other than the awareness of his ability to hate. What is most frightening about Iago is that even if he did have extreme amounts of self-awareness, it is highly likely that he would still do evil things. He is the epitome of evil. In examining the nature of evil, it is necessary to keep Iago in mind in comparison with Othello. In his article “Evil Characters,” Daniel Haybron attempts to define evil in order to make a judgment on whether a character is truly evil in fiction. He begins by suggesting that the evil character judges how people are supposed to think, act, and behave. To be truly evil, one must have a need to dismiss evil on a regular basis.

Moreover, Iago is more or less an expert on this matter: “…takes pleasure in seeing people do evil to one another” (134). He enjoys witnessing and contributing to “the pain of others,” he does not possess an “active conscience,” he has no better nature, “evil permeates his character right down to the marrow” (132-38). Iago lives in his own world, presenting a face to society that differs greatly with his real self. But once again we are presented with Iago’s sexual insecurity, the duality of his nature, and his awareness of exactly who he is. He knows he is a “knave,” but he accepts it.

He embraces the darkness within; he does not fight it, but embraces it, takes pleasure in it, revels in the power he has over others because of his capability for evil and his twisted intelligence in knowing how to extrapolate the worst attributes that might be found in people. There are numerous passages in the play that portray Iago’s self-awareness. In Act 1 Scene 1, Iago professes the duality of his nature to Roderigo: Phelps 4 “Were I the Moor, I would not be Iago. In following him, I follow but myself; Heaven is my judge, not I for love and duty, But seeming so, for my peculiar end; For when my outward action doth demonstrate The native act and figure of my heart In complement extern, tis’ not long after But I will wear my heart upon my sleeve For daws to peck at: I am not what I am.” (1.1.57-65)

“In pursuit of his end of justice Iago employs the method of craft and intrigue, and in pursuit of revenge, the method of psychological suggestion”( McCloskey 27) Iago uses his skills and intelligence to get his revenge against Othello. He hated Othello so much that he decided to get even with him for his unfair decision. Iago says, “But for my sport and profit. I hate the Moor; And it is thought abroad that twixt my heets. He’s done my office” (Act I Scene III 365-367). Iago had everything in his life: Goodfriends, a good job and a wife. However, he envied everything around him. “Iago becomes an Elizabethan Machiavelli, who is not bothered by moral values in the ordinary sense” (McCloskey 28). This utter apathy and wickedness is the sole conflict of this play and ultimately comes with fatal consequences.