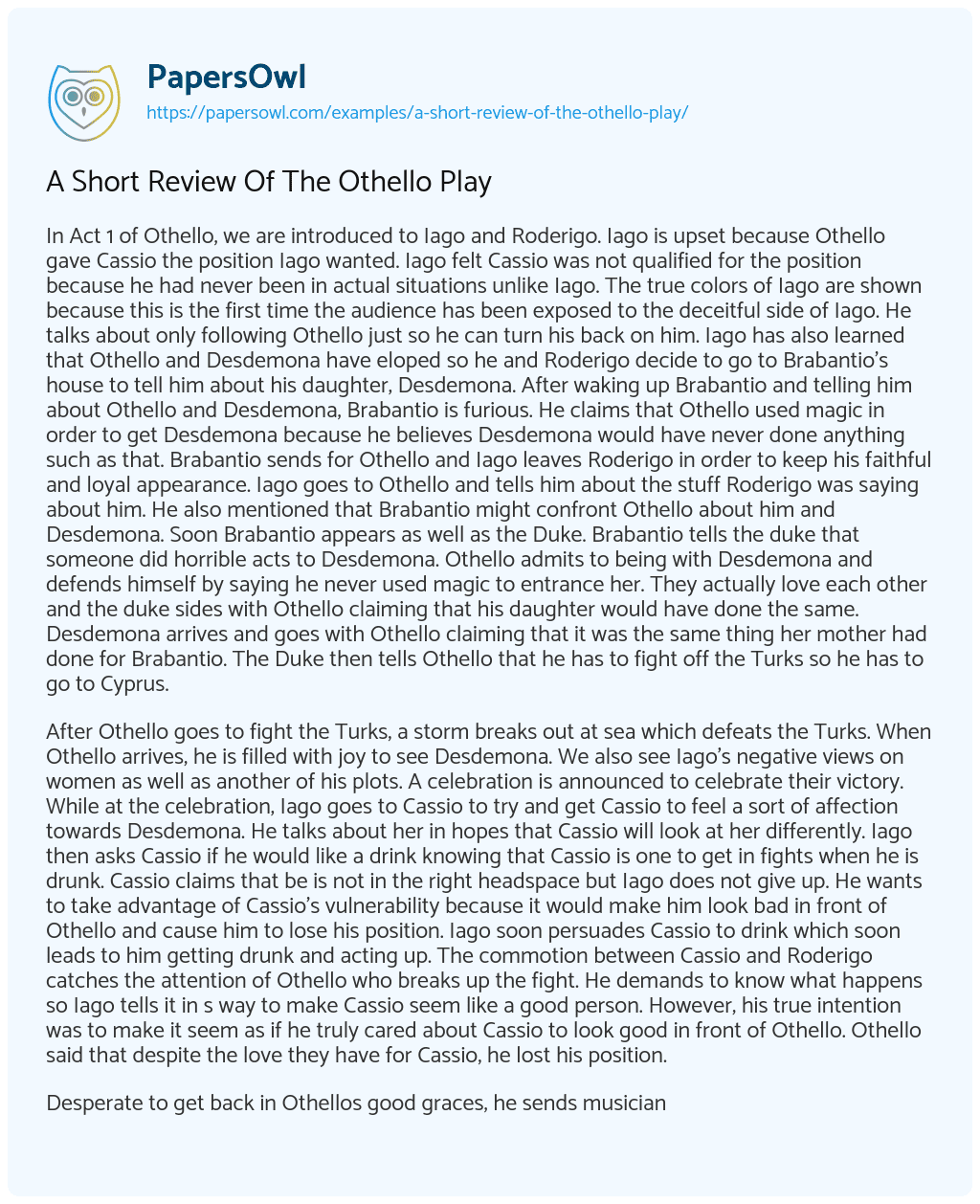 In Act 1 of Othello, we are introduced to Iago and Roderigo. Iago is upset because Othello gave Cassio the position Iago wanted. Iago felt Cassio was not qualified for the position because he had never been in actual situations unlike Iago. The true colors of Iago are shown because this is the first time the audience has been exposed to the deceitful side of Iago. He talks about only following Othello just so he can turn his back on him. Iago has also learned that Othello and Desdemona have eloped so he and Roderigo decide to go to Brabantio’s house to tell him about his daughter, Desdemona. After waking up Brabantio and telling him about Othello and Desdemona, Brabantio is furious. He claims that Othello used magic in order to get Desdemona because he believes Desdemona would have never done anything such as that. Brabantio sends for Othello and Iago leaves Roderigo in order to keep his faithful and loyal appearance. Iago goes to Othello and tells him about the stuff Roderigo was saying about him. He also mentioned that Brabantio might confront Othello about him and Desdemona. Soon Brabantio appears as well as the Duke. Brabantio tells the duke that someone did horrible acts to Desdemona. Othello admits to being with Desdemona and defends himself by saying he never used magic to entrance her. They actually love each other and the duke sides with Othello claiming that his daughter would have done the same. Desdemona arrives and goes with Othello claiming that it was the same thing her mother had done for Brabantio. The Duke then tells Othello that he has to fight off the Turks so he has to go to Cyprus.

After Othello goes to fight the Turks, a storm breaks out at sea which defeats the Turks. When Othello arrives, he is filled with joy to see Desdemona. We also see Iago’s negative views on women as well as another of his plots. A celebration is announced to celebrate their victory. While at the celebration, Iago goes to Cassio to try and get Cassio to feel a sort of affection towards Desdemona. He talks about her in hopes that Cassio will look at her differently. Iago then asks Cassio if he would like a drink knowing that Cassio is one to get in fights when he is drunk. Cassio claims that be is not in the right headspace but Iago does not give up. He wants to take advantage of Cassio’s vulnerability because it would make him look bad in front of Othello and cause him to lose his position. Iago soon persuades Cassio to drink which soon leads to him getting drunk and acting up. The commotion between Cassio and Roderigo catches the attention of Othello who breaks up the fight. He demands to know what happens so Iago tells it in s way to make Cassio seem like a good person. However, his true intention was to make it seem as if he truly cared about Cassio to look good in front of Othello. Othello said that despite the love they have for Cassio, he lost his position.

Desperate to get back in Othellos good graces, he sends musicians to play for Othello. He then asks for Emilia so he can talk to Desdemona in hopes she can convince Othello to give him his position back. Iago later tells him that he would get Othello out so that Cassio and Desdemona can discuss the situation. However, Iago plans to make it seem suspicious between the two to Othello. Desdemona tells Cassio she plans to do everything she can to get Cassio his position back. When Othello and Iago are about to arrive, Cassio is quick to depart despite Desdemona telling him to wait until Othello arrives so they can all talk about it. When Othello arrives he asks Iago if it was Cassio who just left. Iago takes advantage of the situation and tries to make it seem a little suspicious. When Desdemona sees Othello, she immediately talks about Cassio and getting his position back as well as meeting with him as soon as possible. Desdemona later departs after Othello tells her he would not deny her anything. Iago takes this time to fill Othello’s head with suspicion. He makes it seem as if Cassio and Desdemona are having some sort of affair. He does this to lessen any chance of Cassio getting his position back. When Othello goes back to see Desdemona, he asks for the first handkerchief he gave to her  but Desdemona claims to have misplaced it. This upsets Othello because of the backstory of the handkerchief and he storms off.

When Iago and Othello are talking about Cassio and the missing handkerchief, Iago tells Othello that Cassio has been with Desdemona. This causes Othello to faint and soon after Cassio enters. Iago tells him that now is not the time to talk to Othello and Iago wants to talk to him later. When Othello gets back up, Iago tells him that he is going to talk to Cassio and get him to confess the details between him and Desdemona so Othello hides. However, Iago does not talk to Cassio about Desdemona, he talks to him about Bianca. Othello is convinced that the two were having an affair. When Bianca enters the room with the handkerchief, Othello becomes angry. When Bianca and Cassio leave, Othello emerges again and he and Iago discuss the plans to kill both Cassio and Desdemona. His frustrations with Desdemona and Cassio cause Othello to hit Desdemona when they are with Lodovico. Othello later asks Emilia about Desdemona and whether or not her behavior has been suspicious. Emilia claims Desdemona has not done anything suspicious and is then sent to go and get her. When Desdemona arrives, Othello accuses her of not being loyal and being unfaithful. Othello leaves and Desdemona asks Emilia to get Iago. She asks him why her husband would think she was unfaithful and why she is being treated that way. Iago makes the claim that Othello is just upset which is why he is lashing out. When Desdemona and Emilia leave, Roderigo enters. He confronts Iago claiming that he his basically manipulating him and nothing Iago is doing is helping him. Once again, Iago persuades Roderigo that it is not true as well as telling him that Othello is going to Mauritania. With Othello leaving, it would mean Desdemona would leave as well, which Roderigo would not want. Iago lies about Othello going to Mauritania in order to get Roderigo to get rid of Cassio. Iago claims that by getting rid of Cassio, Othello would not leave with Desdemona. In all reality, Othello is actually going to Venice.When Desdemona is getting ready for bed, she and Emilia talk about infidelity. Contrast is seen with the two characters because Desdemona says she would not ever do anything like that. She does not believe in getting even.

Roderigo attempts to stab Cassio but fails to do damage. Cassio then stabs Roderigo inflicting damage. Iago then stabs Cassio in the leg. When Cassio calls out, Othello takes this a sign and heads over to Desdemona to kill her. Lodovico and Graziano hear the cries as well and try to find where they are coming from. The clever Iago makes it seem as if he is just discovering them. To cover his tracks and avoid being caught, Iago stabs Roderigo when he sees him. When Lodovico and Graziano come across Cassio, they ask what happened, however, Cassio does not know how to respond. Othello goes to kill his wife after kissing her. When she realizes what is happening she asks him why and he says it is because of her unfaithfulness to him. Emilia comes in and Othello admits to killing her even after Desdemona calls out she killed herself before she died. Emilia yells out getting the attention of Montano, Graziano, and Iago. Eventually, Othello realizes how Iago manipulated him after Emilia talks about the handkerchief he had previously mentioned. On his second attempt, Iago kills Emilia and runs away. Othello is left alone with the dead women so he kisses his wife and then kills himself. Lodovico shows Iago the dead bodies and talks about how they are a result of his actions.

A Short Review Of The Othello Play. (2019, Oct 28). Retrieved from https://papersowl.com/examples/a-short-review-of-the-othello-play/