My Attitude to Othello and Iago 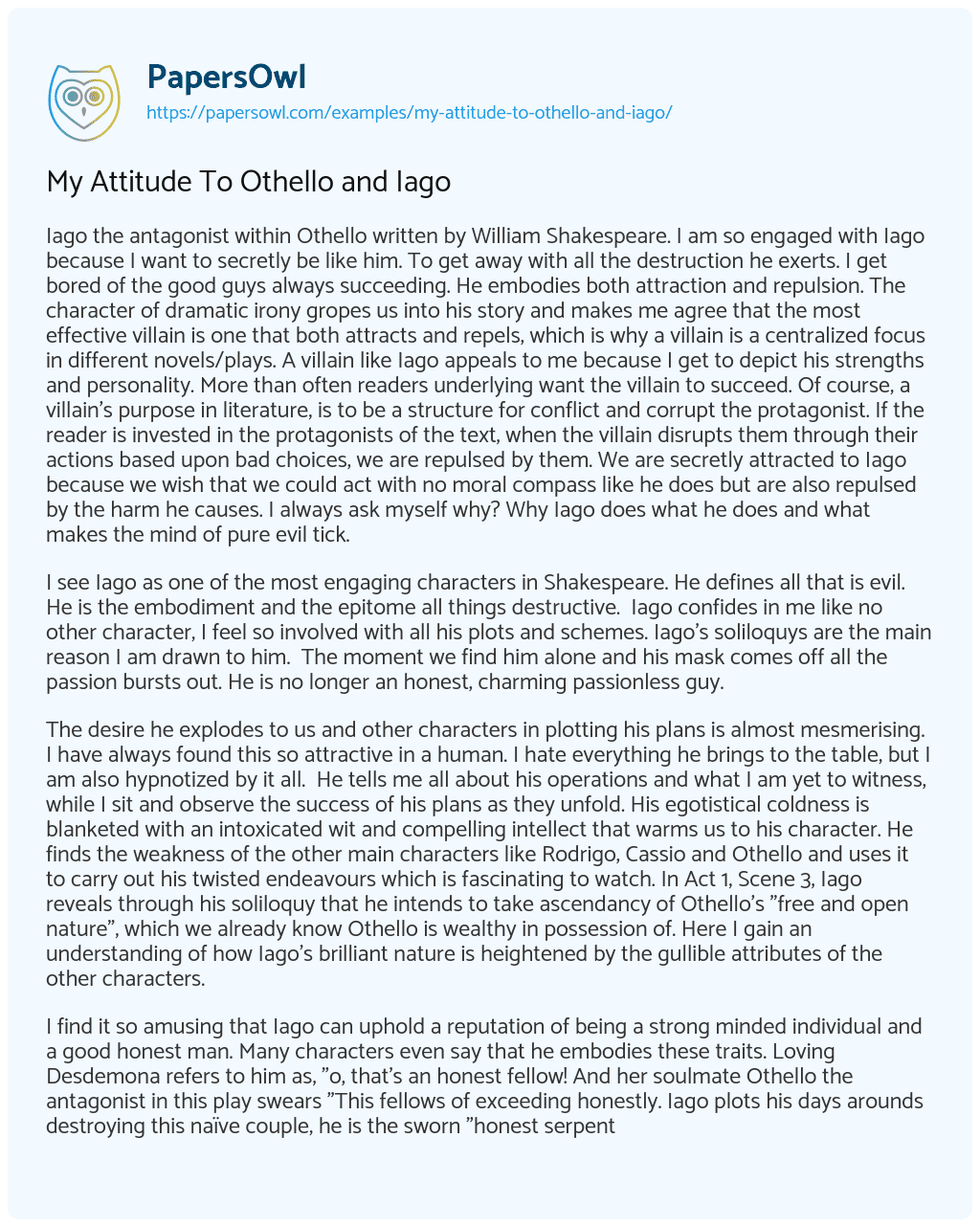 Iago the antagonist within Othello written by William Shakespeare. I am so engaged with Iago because I want to secretly be like him. To get away with all the destruction he exerts. I get bored of the good guys always succeeding. He embodies both attraction and repulsion. The character of dramatic irony gropes us into his story and makes me agree that the most effective villain is one that both attracts and repels, which is why a villain is a centralized focus in different novels/plays. A villain like Iago appeals to me because I get to depict his strengths and personality. More than often readers underlying want the villain to succeed. Of course, a villain’s purpose in literature, is to be a structure for conflict and corrupt the protagonist. If the reader is invested in the protagonists of the text, when the villain disrupts them through their actions based upon bad choices, we are repulsed by them. We are secretly attracted to Iago because we wish that we could act with no moral compass like he does but are also repulsed by the harm he causes. I always ask myself why? Why Iago does what he does and what makes the mind of pure evil tick.

I see Iago as one of the most engaging characters in Shakespeare. He defines all that is evil. He is the embodiment and the epitome all things destructive.  Iago confides in me like no other character, I feel so involved with all his plots and schemes. Iago’s soliloquys are the main reason I am drawn to him.  The moment we find him alone and his mask comes off all the passion bursts out. He is no longer an honest, charming passionless guy.

The desire he explodes to us and other characters in plotting his plans is almost mesmerising. I have always found this so attractive in a human. I hate everything he brings to the table, but I am also hypnotized by it all.  He tells me all about his operations and what I am yet to witness, while I sit and observe the success of his plans as they unfold. His egotistical coldness is blanketed with an intoxicated wit and compelling intellect that warms us to his character. He finds the weakness of the other main characters like Rodrigo, Cassio and Othello and uses it to carry out his twisted endeavours which is fascinating to watch. In Act 1, Scene 3, Iago reveals through his soliloquy that he intends to take ascendancy of Othello’s “free and open nature”, which we already know Othello is wealthy in possession of. Here I gain an understanding of how Iago’s brilliant nature is heightened by the gullible attributes of the other characters.

I find it so amusing that Iago can uphold a reputation of being a strong minded individual and a good honest man. Many characters even say that he embodies these traits. Loving Desdemona refers to him as, “o, that’s an honest fellow! And her soulmate Othello the antagonist in this play swears “This fellows of exceeding honestly. Iago plots his days arounds destroying this naïve couple, he is the sworn “honest serpent that nobody except, only I expects coming.  Even Cassio speaks “I never knew a Florentine more kind of honest. Iago has placed a brilliant, deceitful conception of his essence upon them. This makes him such a powerful and compelling figure to try to understand. The only truly honest relationship Iago portrays throughout the whole play is with me. His entrustment to the audience is seen in his intimate soliloquys and this what attracts us to support him and is unmoral compass.

A confident person in this world will always attract our stare in their direction.  The prosperity of his confidence to achieve the revenge that feasts upon his ego, lures us to be attracted to his villainous appetite. I find myself attracted to him because we all know someone like him. Shakespeare enjoy writing literature that held up a mirror to society. In society we get bored of watching the good of civilisation always prospering. This is why seeing Iago with his mysterious ego and of inhumane moral succeed, so attractive. Iago becomes this realistic portrayal in literature that the protagonist can effortlessly manipulate characters.

As Professor A.C Bradley states “Evil has nowhere else been portrayed with such mastery as in the character of Iago,”. The success of Iago evil ways should make me want the protagonist to triumph but Iago character has been created through a way the readers attraction to the outcome and wishes that the villain also wants. We are charmed through the small successes and actions of Iago in the beginning of the play to ensure our trust in him that he will achieve a larger outcome for later on in the play. Just as were attracted to him in the midst of all the barbaric actions. He never enchanted his companions more, than when they had already been drafted into the vengeance of resourceful mindset.

I feel like all would have remind well in my supporting in Iago’s cruel actions is if he stopped after being the catalyst for Cassio’s drunken scene. It is at this point in the play which my head turns and I finally understand what has become the tragedy of an “honest solider who as overcome by the devil’s want for revenge . He grew blind to morality and his blindness dethroned more than just his enemies. We see the devil within himself so impactful that we start becoming afraid of the man he is. Even though I feel like he has best friended me, this aspect of Iago repulse us from the villain I was once so mesmerised by. I start realising that I have been endorsing this actions and encouraging him to act upon his charming words. We discover how talented in manipulation this man must be to even manipulate us to support him. I am repulsed by the reality of Iago’s performance and stand alongside Othello in the end of play to demand why he would do this to me. Why he would manipulate a vulnerable man to kill his love and turn the me into his blood stained accomplice.

Iago once attractive personality is kept till the end when we demand and answer for his reasonings he simply replied .what you know, you know. From this time forth I never will speak work.. His charismatic brilliance he once captivated with in us is shattered. His sadistic conquests have gone too far for the me to accept any longer, the repulsion overwhelms once present attraction. Shakespeare takes our fragility and once again places us in the hands of protagonist, to help repent for the sins we were charmed to help the devil carry out.

Another reason why I repulse him at the same time as worship him is his misogyny that flows through his veins. Iago makes statements to us both in private asides and soliloquies,  that he believes women are universally not worthy. Though what amazes me is that Iago doesn’t care for women and their sex, the only thing that really gets this man going is carrying out evil. In act 2 he gives his opinions on women by saying

“You are pictures out of doors, bells / in your parlors, wild-cats in your kitchens, saints in / your injuries, devils being offended, players in your / housewifery, and housewives in your beds.

This sentences gives me a clear idea of what type of a pig Iago is. Is confident manipulations are overseen in his misogynistic way and I look at this in repulse. Iago’s cruel behaviours towards women definitely rub off on other characters, most of all Othello. Because Othello trusts this “honest and noble man so much Othello begins to say words from Iago vile dictionary. Othello addresses Desdemona “are you not a srumpet?  “what, not a whore? yes, this could have been a cry for hate and convincing himself he isn’t wrong for killing her. But I also feel like Iago influenced this sort of language. He is a dominate male figure. When Emilia tried to expresses her of the times feminist point of views. Her views were very centred towards importance of male power.

I am manipulated to feel attraction towards the villain through Shakespeare perspective at first, the reality of the injustice actions that motivated the antagonists resulting destruction, reminds me of the repulsion we are meant to feel for them. The villain is effective through his manners of attracting and repelling, as we are undoubtedly enamoured in their every move, no matter how they are making us feel. Within Othello, Iago most definitely leaves an effect on the reader that compels us to move through an abundance of emotions towards him and his actions. The joy of rereading the play and experiencing the unexpected feeling of  a villainous demon’s charm, despite their chilling and perverse nature, will always reinforce the effectiveness of a villain that can attract and repel us at any moment the author chooses.

My Attitude To Othello and Iago. (2019, Oct 08). Retrieved from https://papersowl.com/examples/my-attitude-to-othello-and-iago/

Was Iago a Real Villain?