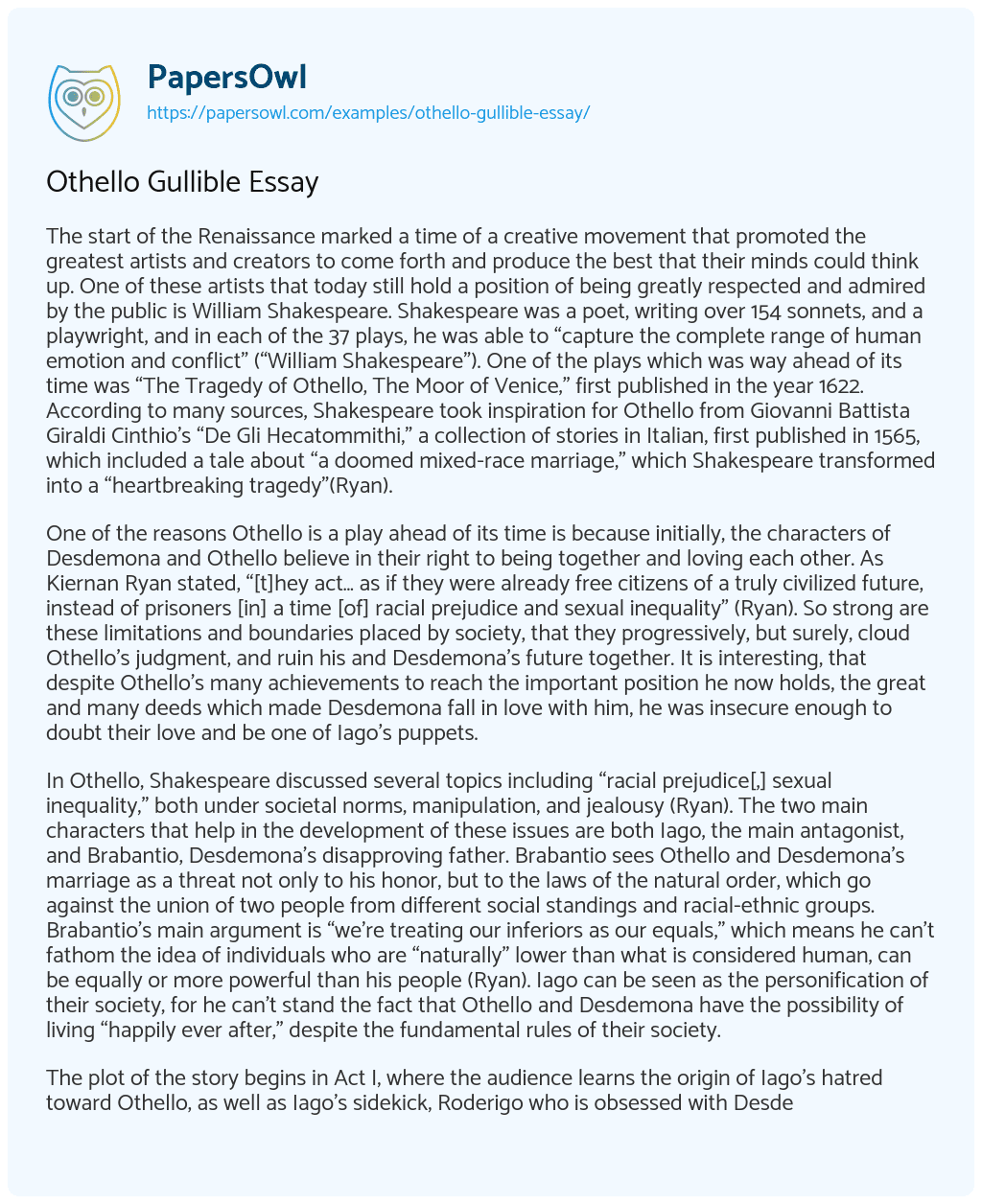 The start of the Renaissance marked a time of a creative movement that promoted the greatest artists and creators to come forth and produce the best that their minds could think up. One of these artists that today still hold a position of being greatly respected and admired by the public is William Shakespeare. Shakespeare was a poet, writing over 154 sonnets, and a playwright, and in each of the 37 plays, he was able to “capture the complete range of human emotion and conflict” (“William Shakespeare”). One of the plays which was way ahead of its time was “The Tragedy of Othello, The Moor of Venice,” first published in the year 1622. According to many sources, Shakespeare took inspiration for Othello from Giovanni Battista Giraldi Cinthio’s “De Gli Hecatommithi,” a collection of stories in Italian, first published in 1565, which included a tale about “a doomed mixed-race marriage,” which Shakespeare transformed into a “heartbreaking tragedy”(Ryan).

One of the reasons Othello is a play ahead of its time is because initially, the characters of Desdemona and Othello believe in their right to being together and loving each other. As Kiernan Ryan stated, “[t]hey act… as if they were already free citizens of a truly civilized future, instead of prisoners [in] a time [of] racial prejudice and sexual inequality” (Ryan). So strong are these limitations and boundaries placed by society, that they progressively, but surely, cloud Othello’s judgment, and ruin his and Desdemona’s future together. It is interesting, that despite Othello’s many achievements to reach the important position he now holds, the great and many deeds which made Desdemona fall in love with him, he was insecure enough to doubt their love and be one of Iago’s puppets.

In Othello, Shakespeare discussed several topics including “racial prejudice[,] sexual inequality,” both under societal norms, manipulation, and jealousy (Ryan). The two main characters that help in the development of these issues are both Iago, the main antagonist, and Brabantio, Desdemona’s disapproving father. Brabantio sees Othello and Desdemona’s marriage as a threat not only to his honor, but to the laws of the natural order, which go against the union of two people from different social standings and racial-ethnic groups. Brabantio’s main argument is “we’re treating our inferiors as our equals,” which means he can’t fathom the idea of individuals who are “naturally” lower than what is considered human, can be equally or more powerful than his people (Ryan). Iago can be seen as the personification of their society, for he can’t stand the fact that Othello and Desdemona have the possibility of living “happily ever after,” despite the fundamental rules of their society.

The plot of the story begins in Act I, where the audience learns the origin of Iago’s hatred toward Othello, as well as Iago’s sidekick, Roderigo who is obsessed with Desdemona. The story continues with both men seeking the attention of senator Brabantio, Desdemona’s father, claiming that Othello used witchcraft to steal and make her marry him. Othello is confronted but is given the chance to speak in his defense. Othello convinces the duke, and Desdemona soon enters to confirm their love and her loyalty and devotion to her husband. Even after the turn of events, Iago continues to manipulate Roderigo to join his plan to destroy Othello’s life. At the beginning of Act II, Iago chooses his next victim, Cassio, who would be the focus that will make Othello’s human flaws arise and result in his tragedy. Iago plans to paint Cassio as Desdemona’s secret affair to Othello, which will help in his revenge.

Act II continues with the first step of Iago’s plan, making Cassio seem like a bad person in Othello’s eyes, who not only has a drinking problem but injures people for no reason. Iago uses this situation to suggest to Cassio that he should seek Desdemona’s help to rebuild his reputation and regain his position as lieutenant. The time Cassio will now spend with Desdemona will be the “evidence” Iago will use to “prove” the affair to Othello. Act III is when Iago begins insinuating the existence of the affair between Cassio and Desdemona. Othello us quite gullible because although he doesn’t explicitly accept the information, he takes measures and begins to develop the idea. Later Othello demands proof, and so Iago skillfully placed Desdemona’s misplaced handkerchief among Cassio’s belongings. The handkerchief is of great importance because it was the first gift Othello gave to Desdemona.

Act IV is when Othello “confirmed” the suspicion by eavesdropping a conversation taken out of context, which Iago planned, where Cassio tells the story about his relationship with a prostitute, not Desdemona. The situation is worsened when the prostitute, Bianca, overhears the conversation and reveals Desdemona’s handkerchief, given to her by Cassio when he found among his belongings for her to copy the embroidery. Othello is then determined to harm Desdemona, and Iago supports him by suggesting he strangle her on their bed, which she tainted with her adultery. It is only until the second scene of Act IV when Othello finally confronts Desdemona face to face, but he has already made up his mind about her being a whore.

Desdemona prepares herself to die at the end of Act IV. In Act V, after believing that Cassio is dead by Iago’s hand, Othello goes home to kill his wife. He strangles her, but in her last breath, she manages to say that she committed suicide, to protect Othello. In the end, Emilia, Iago’s wife, and a forced accomplice, reveals the whole truth about Iago’s evil deeds, Othello is initially in denial, but eventually realizes the depth of his guilt and tragedy, which drives him to kill himself.