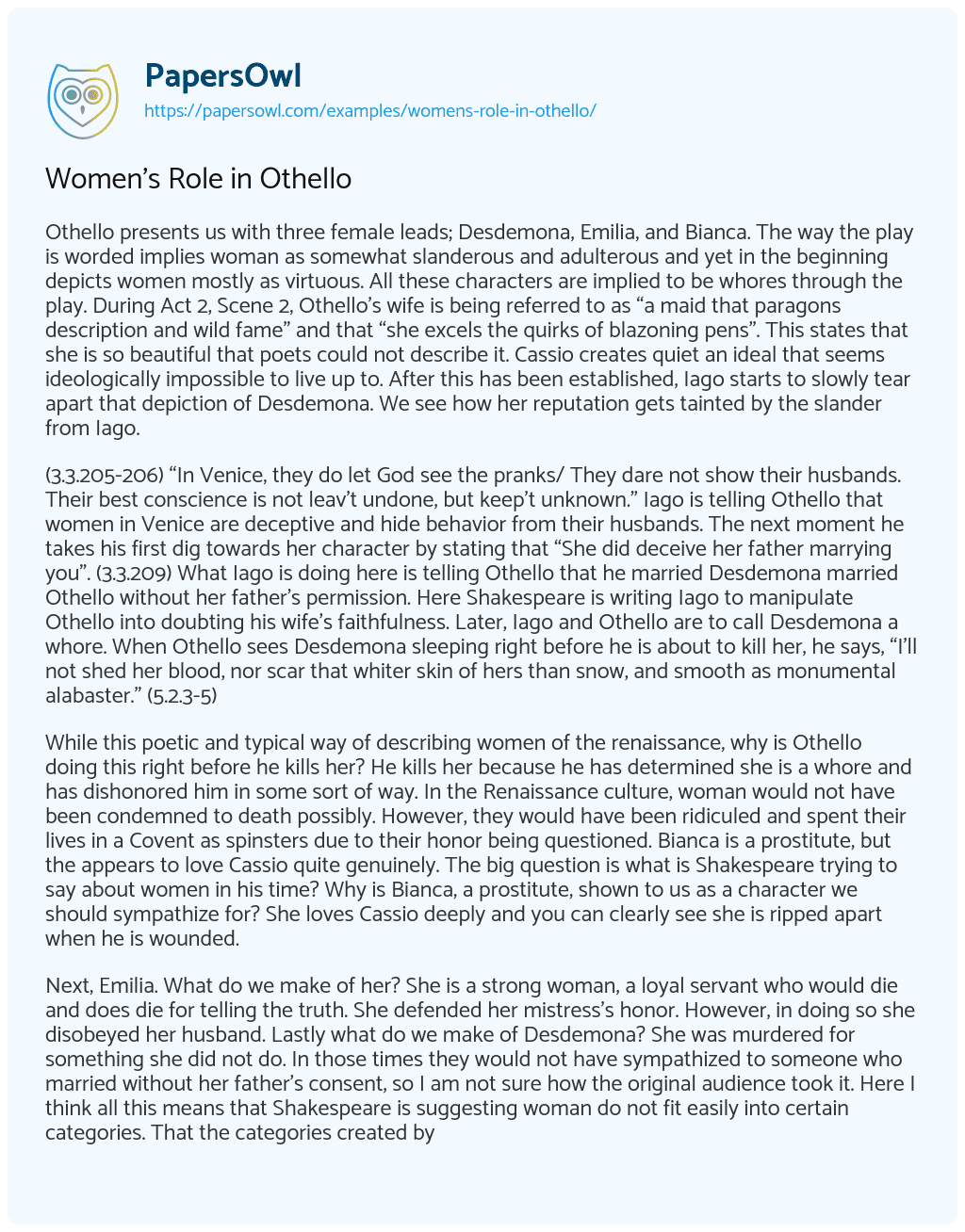 Othello presents us with three female leads; Desdemona, Emilia, and Bianca. The way the play is worded implies woman as somewhat slanderous and adulterous and yet in the beginning depicts women mostly as virtuous. All these characters are implied to be whores through the play. During Act 2, Scene 2, Othello’s wife is being referred to as “a maid that paragons description and wild fame” and that “she excels the quirks of blazoning pens”. This states that she is so beautiful that poets could not describe it. Cassio creates quiet an ideal that seems ideologically impossible to live up to. After this has been established, Iago starts to slowly tear apart that depiction of Desdemona. We see how her reputation gets tainted by the slander from Iago.

(3.3.205-206) “In Venice, they do let God see the pranks/ They dare not show their husbands. Their best conscience is not leav’t undone, but keep’t unknown.” Iago is telling Othello that women in Venice are deceptive and hide behavior from their husbands. The next moment he takes his first dig towards her character by stating that “She did deceive her father marrying you”. (3.3.209) What Iago is doing here is telling Othello that he married Desdemona married Othello without her father’s permission. Here Shakespeare is writing Iago to manipulate Othello into doubting his wife’s faithfulness. Later, Iago and Othello are to call Desdemona a whore. When Othello sees Desdemona sleeping right before he is about to kill her, he says, “I’ll not shed her blood, nor scar that whiter skin of hers than snow, and smooth as monumental alabaster.” (5.2.3-5)

While this poetic and typical way of describing women of the renaissance, why is Othello doing this right before he kills her? He kills her because he has determined she is a whore and has dishonored him in some sort of way. In the Renaissance culture, woman would not have been condemned to death possibly. However, they would have been ridiculed and spent their lives in a Covent as spinsters due to their honor being questioned. Bianca is a prostitute, but the appears to love Cassio quite genuinely. The big question is what is Shakespeare trying to say about women in his time? Why is Bianca, a prostitute, shown to us as a character we should sympathize for? She loves Cassio deeply and you can clearly see she is ripped apart when he is wounded.

Next, Emilia. What do we make of her? She is a strong woman, a loyal servant who would die and does die for telling the truth. She defended her mistress’s honor. However, in doing so she disobeyed her husband. Lastly what do we make of Desdemona? She was murdered for something she did not do. In those times they would not have sympathized to someone who married without her father’s consent, so I am not sure how the original audience took it. Here I think all this means that Shakespeare is suggesting woman do not fit easily into certain categories. That the categories created by the Renaissance patriarchy are changeable. States that woman are human and changeable. That even sometimes noble and honorable, regardless of sexual behavior.

In Shakespeare’s time women did not have many freedoms. Most of the major female characters are involved somewhat romantically in plots that revolve around choosing a suiter. Later this creates hostility between father and daughter and thus begins the struggle of the woman trying to free herself from male control. This is in Othello where Desdemona sneaks out to marry a man she has chosen, regardless of what her father wishes. Although she frees herself of her father’s grasp, she never entirely frees herself from male control. Even though she stays faithful to Othello, she ultimately gets killed because of suspicion of adultery. Shakespeare usually depicts woman in secondary roles due to typical ideals of the Rennaissance era.

You see Desdemona fight for power with Iago’s ear, Desdemona and Emilia defend themselves against their husbands concerns; while Bianca tries to assert her powers as Cassio’s mistress. All three of these women lose their power struggles. At the end, all females are silenced, and power negated. The only ones with power that is ever seen are the males that had the power to describe, define, and ultimately kill them. During the Renaissance, a lot of people believed that men were superior to woman. It was stated that women should serve her husband and nothing woman has equal power to man. This is clearly shown by Shakespeare in many plays and is shown in Othello. Men always had power and the roles are clearly separated. The women in Othello never had any power to begin with, regardless of the effort they put forth.