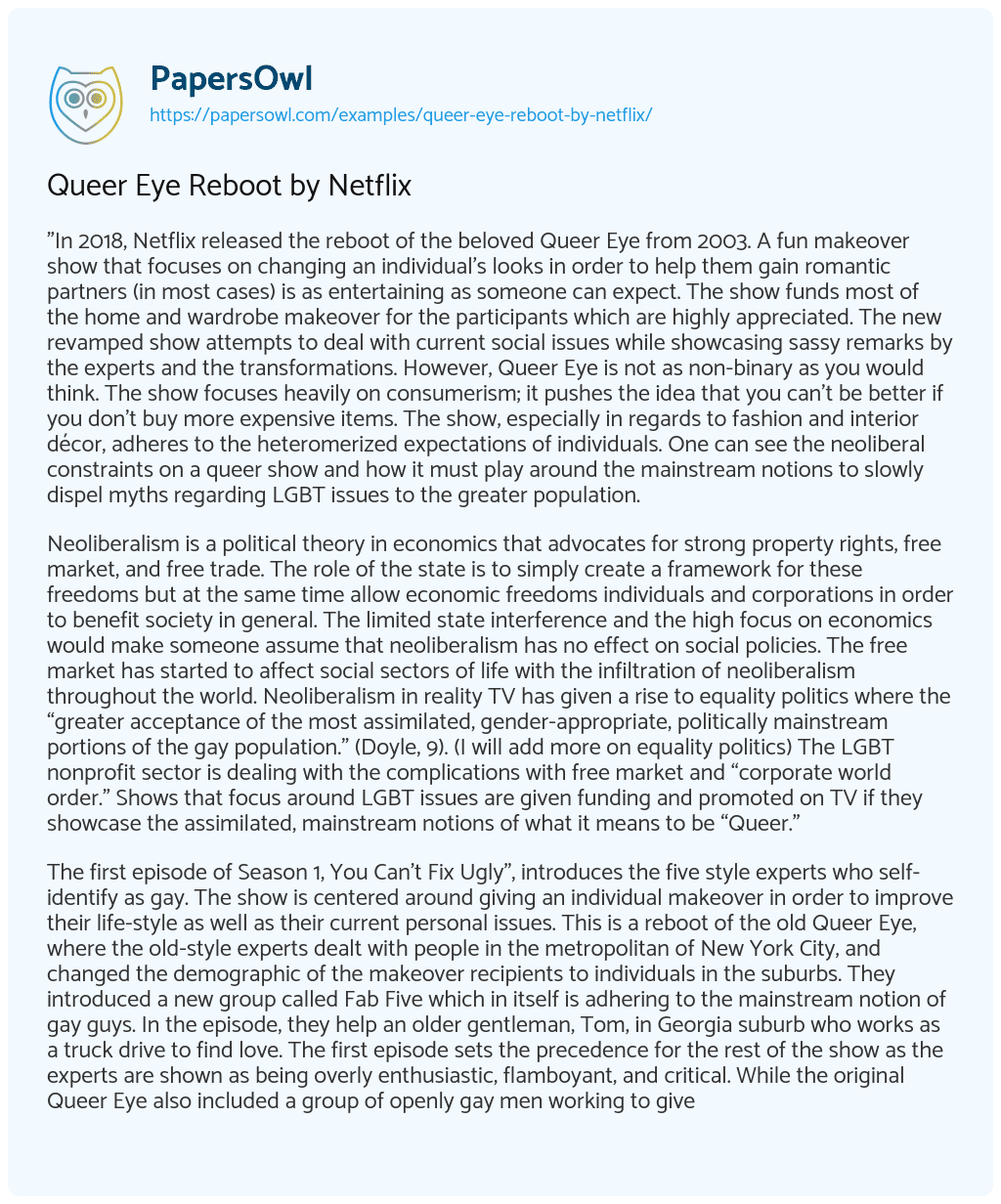 “In 2018, Netflix released the reboot of the beloved Queer Eye from 2003. A fun makeover show that focuses on changing an individual’s looks in order to help them gain romantic partners (in most cases) is as entertaining as someone can expect. The show funds most of the home and wardrobe makeover for the participants which are highly appreciated. The new revamped show attempts to deal with current social issues while showcasing sassy remarks by the experts and the transformations. However, Queer Eye is not as non-binary as you would think. The show focuses heavily on consumerism; it pushes the idea that you can’t be better if you don’t buy more expensive items. The show, especially in regards to fashion and interior décor, adheres to the heteromerized expectations of individuals. One can see the neoliberal constraints on a queer show and how it must play around the mainstream notions to slowly dispel myths regarding LGBT issues to the greater population.

Neoliberalism is a political theory in economics that advocates for strong property rights, free market, and free trade. The role of the state is to simply create a framework for these freedoms but at the same time allow economic freedoms individuals and corporations in order to benefit society in general. The limited state interference and the high focus on economics would make someone assume that neoliberalism has no effect on social policies. The free market has started to affect social sectors of life with the infiltration of neoliberalism throughout the world. Neoliberalism in reality TV has given a rise to equality politics where the “greater acceptance of the most assimilated, gender-appropriate, politically mainstream portions of the gay population.” (Doyle, 9). (I will add more on equality politics) The LGBT nonprofit sector is dealing with the complications with free market and “corporate world order.” Shows that focus around LGBT issues are given funding and promoted on TV if they showcase the assimilated, mainstream notions of what it means to be “Queer.”

The first episode of Season 1, You Can’t Fix Ugly”, introduces the five style experts who self-identify as gay. The show is centered around giving an individual makeover in order to improve their life-style as well as their current personal issues. This is a reboot of the old Queer Eye, where the old-style experts dealt with people in the metropolitan of New York City, and changed the demographic of the makeover recipients to individuals in the suburbs. They introduced a new group called Fab Five which in itself is adhering to the mainstream notion of gay guys. In the episode, they help an older gentleman, Tom, in Georgia suburb who works as a truck drive to find love. The first episode sets the precedence for the rest of the show as the experts are shown as being overly enthusiastic, flamboyant, and critical. While the original Queer Eye also included a group of openly gay men working to give makeovers to men, the new Queer Eye tries to include more than heterosexual men for their guests. Both versions of the show are heavily rooted in consumerism as well as heteronormative values despite the newer version being more progressive.

In the episode the gentleman asks the Fab Five, “So who’s the wife and who’s the husband?” The team quickly explain that wife/husband are heteronormative values that are not necessarily the dynamic of a queer relationship. At the same time, the experts play into the stereotypes of a gay man: they are all represented as having; good style, cooking and, decorating skill, and are flamboyantly sassy. They make sassy remarks to Tom during the whole episode, but the gentleman seems very receptive despite making comments such as “gay people have great style.” Tan France throughout the makeover directs the gentlemen to colors and styles that are age appropriate. This is reinforcing the gender- age normative social ideas of how an individual should act to be accepted.

Not only that, the show blatantly utilizes problematic stereotypes of gay men in order to gain more traction in views. For example, mid episode the camera pans into a building as a voice says “Mhm, just the right amount of head.” Without context, one could misconstrue this comment as a sexual double entendre. This is an intentional choice by the produces to reinforce the stereotype of gay men as sexually promiscuous. As they interact with each other watching Tom post transformative over the TV cheering him on, they are extremely flamboyant. The producers and media companies utilize these accepted mainstream stereotypes in order to generate more revenue. The show uses the same trope of makeover reality TV; the show will introduce a down on their luck individual and they’re given makeovers by experts. The reason why Queer Eye is extremely popular despite countless similar makeover reality shows is because of this idea that these gay experts are the individual’s “Gay Best Friend” even for a limited period. If the show replaced Fab Five with CIS-gendered heterosexual men, the show wouldn’t change drastically.

In the episode “Sky’s the Limit”, the one receiving the makeover is a trans man named Skylar. The show starts off with a video of Skylar going through a top surgery and Skylar is taken aback when he finds out that the Fab Five had watched the video. The surgery video was not necessary to Skylar’s makeover but was used to create a dramatic effect. Skylar introduces himself as a transman who performed drag in college before fully embracing his desire to be recognized as a man. Tan starts the show by stating that he has never met a trans person and confronts his own ignorance regarding trans issues/experiences. He is surprised that Skylar likes androgynous clothing and explains that his main concern was to dress Skylar in things that made him feel like a man. He works around Skylar’s androgynous and slightly feminine styles and Skylar seems happy with the result. Tan introduces Skyler with a suit company creator that makes suits that are trans friendly after they spoke of his traumatic experience while getting his suit fitted. This is because Tan exclaims that “Nothing makes me feel more like a man than being in a suit.” While this is a less problematic episode compared to “You Can’t Fix Ugly”, this episode is no less rooted in neoliberalism.

His experiences nor his choices were heteronormative, and he seemed extremely proud of his home that he used as a queer sanctuary. When Fab Five arrived at Skylar’s home, they immediately started criticizing his furnishing. One of them stated that his house screamed, “Queer, Queer, Queer.” They ripped off the couch cover and are horrified at the ragged couches. Skylar explains that he is now in medical debt of close to $100,000 due to surgery complications despite generous donations collected by his LGBT community. They transform his whole home by purchasing and decorating with new furniture. The focus on purchasing new furnishing that fit his new look is unrealistic. If the show wasn’t funding this transformation, Skylar would have a difficult time completely recreating his house to look like a shopping catalogue with his massive medical debt.

The experts focus heavily on creating a space and look that fit a 30-year-old man instead of the pre-transformation Skylar. They reiterate that Queer should be the pillar of his home and not have it be his entire identity. This is the same assimilation that equality politics addresses that Queer Eye tries to reinforce. They want Skylar to tone down his “Queer-ness” and have it be a small column in his life despite the whole episode showing Skylar’s dedication in being an integral part of the queer-community and to give back. Queer Eye does a better job at presenting queer identities and their struggles compared to the very first episode. They speak of his family’s rejection due to him being trans as well as his struggles to change his gender marker on his license. The DMV telling Skylar to “come back when you’re complete” is a horror story for the trans community. The heteronormative idea that to be truly trans, one must go through costly and dangerous medical transformations is shown in the DMV’s response to Skylar. At the same time, the show not addressing this vital issue feels like they want to cash in on the sympathy views for Skylar without speaking much about the larger issues.

The show is extremely popular due to the neoliberal ideals of transforming an individual who is considered a loser in society to a winner. This emphasis on betterment has been a tested and proven tactic to increase views and ratings. Grazian quotes multiple shows such as Survivor, American Idol, Who Wants to be a Millionaire that have a high emphasis on winning. While Queer Eye is not as in your face regarding the “winning/losing”, it has many layers of the same rhetoric in the show. The first is the high emphasis on changing the individual’s styles to a more age restricted heteronormative fashion in order to have been be more accepted in society. The second is the evaluation of the individuals after the transformation. The Fab Five sit around and evaluate the individual’s transformation and decide whether it was a success or not. The third is the fact that the Fab Five had to go through a vetting process where they “won” a seat as an experts while competing against countless applicants.

Grazian, in Neoliberalism and the Realities of Reality Television, states that “But while programs like Extreme Makeover: Home Edition may seem uplifting, their message is no less neoliberal than The Biggest Loser: like health care, housing is never a right to be provided to all citizens by the state, but a luxury sporadically granted to the poor by affluent private donors.” Queer Eye has parallels Extreme Makeover as it transforms someone’s life with luxuries that the participants could may or may not be able to obtain on their own. In “Sky’s the Limit”, the show speaks of Skylar’s high medical debt but the real issues of unaffordable healthcare is never brought up. The more episodes are shown, the sponsorship become apparent as the brands are showcased heavily in the show. The show that claims to talk about queer issues has become a marketing ploy to sell more products from a certain brand.

Queer Youth, Homelessness, and the Failure of the Foster Care System