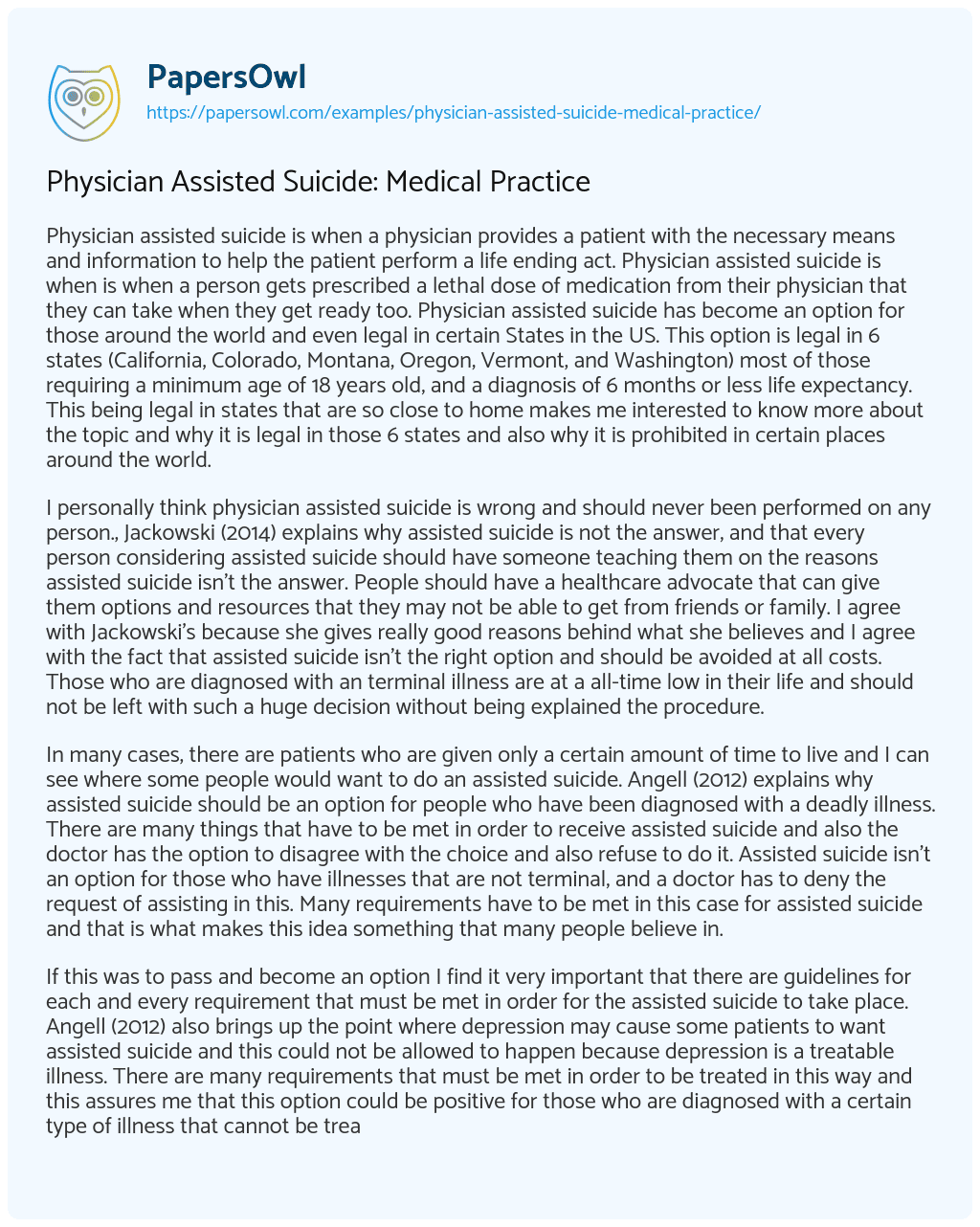 Physician assisted suicide is when a physician provides a patient with the necessary means and information to help the patient perform a life ending act. Physician assisted suicide is when is when a person gets prescribed a lethal dose of medication from their physician that they can take when they get ready too. Physician assisted suicide has become an option for those around the world and even legal in certain States in the US. This option is legal in 6 states (California, Colorado, Montana, Oregon, Vermont, and Washington) most of those requiring a minimum age of 18 years old, and a diagnosis of 6 months or less life expectancy. This being legal in states that are so close to home makes me interested to know more about the topic and why it is legal in those 6 states and also why it is prohibited in certain places around the world.

If this was to pass and become an option I find it very important that there are guidelines for each and every requirement that must be met in order for the assisted suicide to take place. Angell (2012) also brings up the point where depression may cause some patients to want assisted suicide and this could not be allowed to happen because depression is a treatable illness. There are many requirements that must be met in order to be treated in this way and this assures me that this option could be positive for those who are diagnosed with a certain type of illness that cannot be treated.

I believe that assisted suicide has many loopholes that can be found and misused and Rockett (2014) explains that there are in fact many mistakes can happen when assisting someone in this type of treatment. This article talks about a patient who was given 6 months to live but then ended up living longer than 6 months. A person’s sickness can be reversed, but if someone decided to do assisted suicide then the outcome cannot change. Assisted suicide could end someone’s life when they could have much longer to live than their diagnosis told them. Rockett (2014) makes many points on how assisted suicide could go wrong therefore it should not be practiced, she explains the mistakes that can be made and that can cost someone their life. The doctor should fully commit themselves to the health of their patients, and patients should feel safe in the care of their physicians. I believe that this method of treatment could be misused by many doctors, leaving patients hopeless and unsafe in the care of their physicians.

Everyone has the right to express themselves anyway that they want. They also have the right to go about their life in any way that they choose. In this article, Humphreys (2006) explains to us that people should be able to control the way they die. He uses his brother as an example because he was diagnosed with cancer, and suffered through chemo the entire time. Someone who is diagnosed with a terminal illness and given a certain amount of time to live should have the option of taking control and ending their pain and suffering rather than just waiting until the day comes. Having to suffer and just lay there waiting until you die is something that is explained in this article, and assisted suicide could really help those who are in this situation. I also believe that the person should be informed very deeply and given information about the topic. I even think the person should be told that there is potentially a chance they could live longer than expected. I believe this would in fact change many people’s minds about ending their life’s.

My view is that there are very good points explained by Humphreys (2006) stating that if someone is near death and suffering then they should be able to determine when they are ready to end it. I think that assisted suicide would be a lot more difficult than just giving this as an option for those with a terminal illness. If assisted suicide was an option for those who are ill then it should be used in a strict manner to ensure that it isn’t misused in any type of way. I think there should be a program for the people to go through and given the information on the subject. I think that many times many people give up to soon when if they would have just fought awhile longer their life would have turned around for the better.