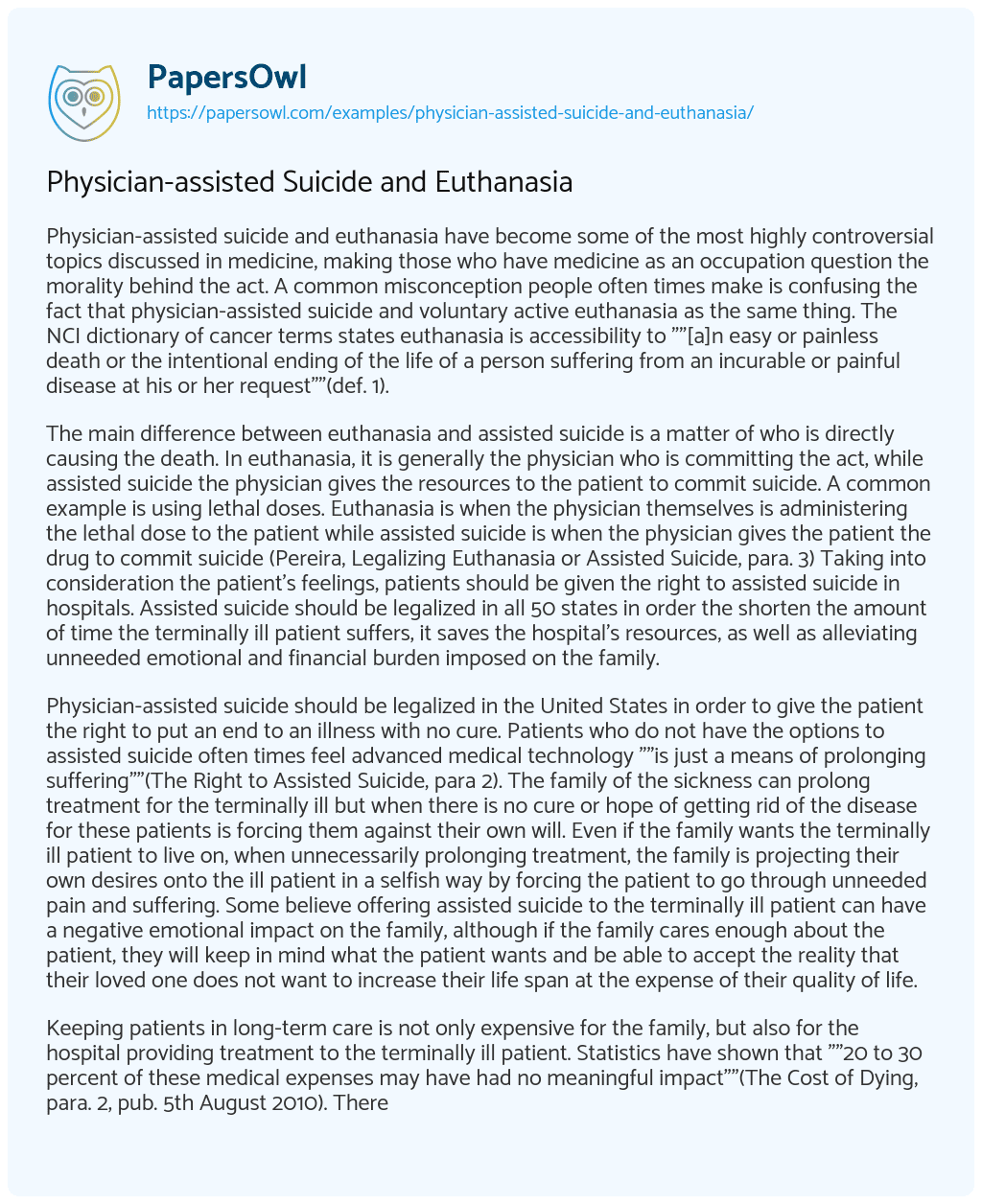 Physician-assisted suicide and euthanasia have become some of the most highly controversial topics discussed in medicine, making those who have medicine as an occupation question the morality behind the act. A common misconception people often times make is confusing the fact that physician-assisted suicide and voluntary active euthanasia as the same thing. The NCI dictionary of cancer terms states euthanasia is accessibility to “”[a]n easy or painless death or the intentional ending of the life of a person suffering from an incurable or painful disease at his or her request””(def. 1).

Physician-assisted suicide should be legalized in the United States in order to give the patient the right to put an end to an illness with no cure. Patients who do not have the options to assisted suicide often times feel advanced medical technology “”is just a means of prolonging suffering””(The Right to Assisted Suicide, para 2). The family of the sickness can prolong treatment for the terminally ill but when there is no cure or hope of getting rid of the disease for these patients is forcing them against their own will. Even if the family wants the terminally ill patient to live on, when unnecessarily prolonging treatment, the family is projecting their own desires onto the ill patient in a selfish way by forcing the patient to go through unneeded pain and suffering. Some believe offering assisted suicide to the terminally ill patient can have a negative emotional impact on the family, although if the family cares enough about the patient, they will keep in mind what the patient wants and be able to accept the reality that their loved one does not want to increase their life span at the expense of their quality of life.

Keeping patients in long-term care is not only expensive for the family, but also for the hospital providing treatment to the terminally ill patient. Statistics have shown that “”20 to 30 percent of these medical expenses may have had no meaningful impact””(The Cost of Dying, para. 2, pub. 5th August 2010). There is no meaningful impact on the patient’s life because the treatment at the stage of a terminal patient often times no longer are effective and helping the patient by any means. A study was conducted by a medical officer, Dr. Richard Parker, who gathered data on different Medicaid claims with the amount of procedures a patient has received and the location of the treatment given which shows “”42 percent of patients died at home at a cost of about $4,760 for their last month of life, while 40 percent died in a hospital at a cost of $32,379″”(Kodjack, Dying In A Hospital Means, para. 6, pub. 15 June. 2016). The amount of treatment and money spent on a terminally ill patient wanting the option of assisted suicide would be wasting valuable resources on someone who does not want the treatment rather than spending time treating someone who is curable and is in need of treatment. Studies have also been conducted on how prolonged treatment of terminally ill patients is too expensive for many people. During an interview of a VA hospital nurse, she explained assisted suicide is a cheaper option for poorer families who have no insurance(Dampil, Jho. Personal Interview, 11 Dec. 2018).

Assisted suicide should be made legal because the role of a doctor is to not only treat the diseases of their patients but when curing a patient of their illness is no longer possible, doctors should focus more on fulfilling the patient’s last wishes. Anyone who has experience working in the medical field understands treatment and curing of disease is not the only job they are required to perform, and must also keep in mind the best interest of the patient. When medical staff forces treatment upon a terminally ill patient who prefers to pass away quickly, they are not only stripping the patient’s right to refuse medical treatment, they are essentially making the patient remember the last of their days as slow and painful, decreasing their quality of life. Although these patients are alive physically, they have become dead emotionally and mentally since they do not have the capacity to enjoy life lying helplessly in a hospital bed. Making a patient go through ineffective treatment is not only a waste of money for the patient, but can also have negative repercussions due to adverse effects.