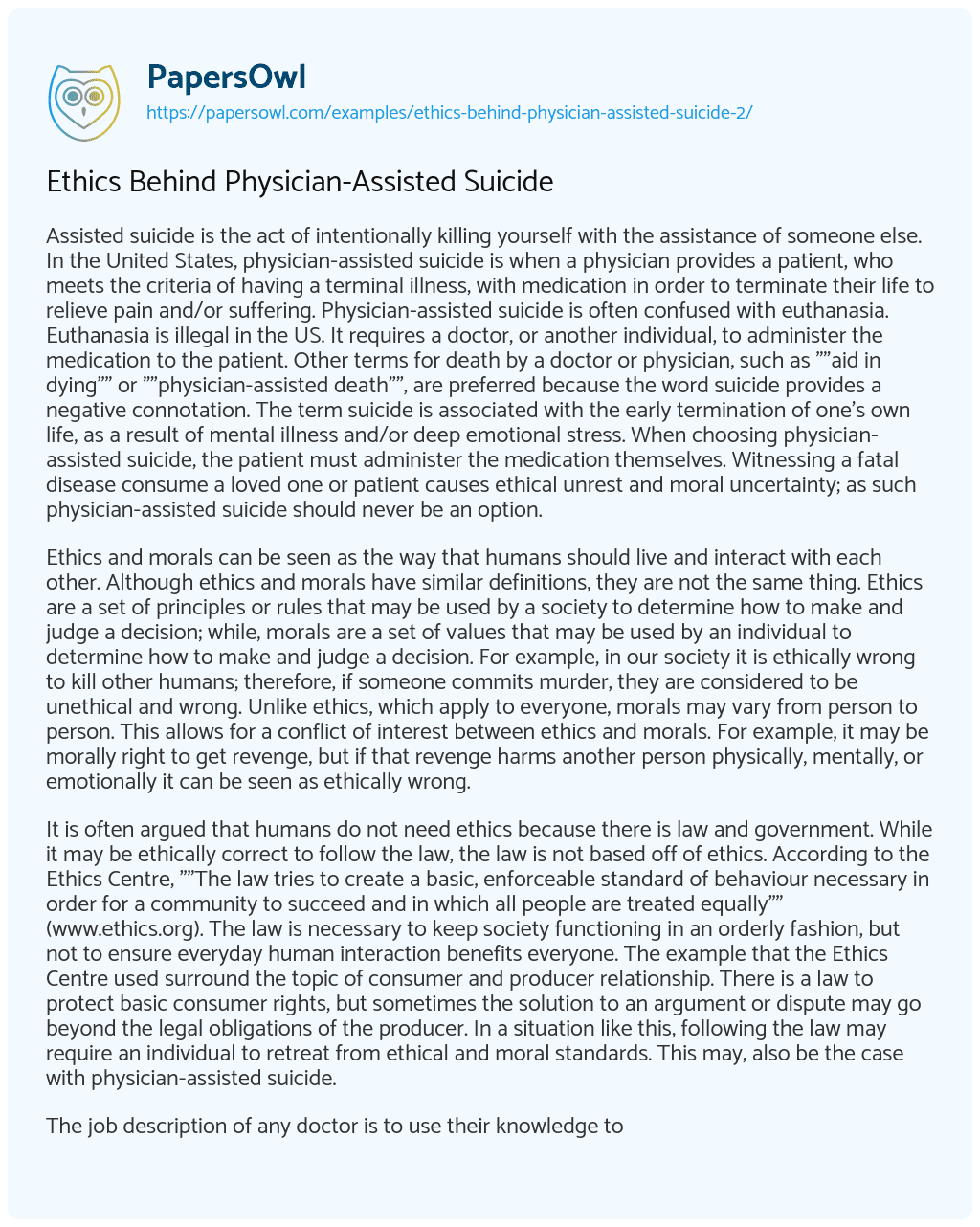 Ethics and morals can be seen as the way that humans should live and interact with each other. Although ethics and morals have similar definitions, they are not the same thing. Ethics are a set of principles or rules that may be used by a society to determine how to make and judge a decision; while, morals are a set of values that may be used by an individual to determine how to make and judge a decision. For example, in our society it is ethically wrong to kill other humans; therefore, if someone commits murder, they are considered to be unethical and wrong. Unlike ethics, which apply to everyone, morals may vary from person to person. This allows for a conflict of interest between ethics and morals. For example, it may be morally right to get revenge, but if that revenge harms another person physically, mentally, or emotionally it can be seen as ethically wrong.

It is often argued that humans do not need ethics because there is law and government. While it may be ethically correct to follow the law, the law is not based off of ethics. According to the Ethics Centre, “”The law tries to create a basic, enforceable standard of behaviour necessary in order for a community to succeed and in which all people are treated equally”” (www.ethics.org). The law is necessary to keep society functioning in an orderly fashion, but not to ensure everyday human interaction benefits everyone. The example that the Ethics Centre used surround the topic of consumer and producer relationship. There is a law to protect basic consumer rights, but sometimes the solution to an argument or dispute may go beyond the legal obligations of the producer. In a situation like this, following the law may require an individual to retreat from ethical and moral standards. This may, also be the case with physician-assisted suicide.

The job description of any doctor is to use their knowledge to treat patients with illness, disease, or injury and help maintain mental and physical health. Physicians are trained and specialize in medicine. Having the knowledge of medicine means that physicians have the power to heal. When assisting a patient with suicide, the power of healing is not being used. Physicians who assist patients in dying are looking to diminish pain and suffering in the patient, not to fight disease or maliciously kill the patient. The Hippocratic Oath is an oath taken by physicians. It dates back to Ancient Greece and is one of the most important steps in becoming a doctor. It requires physicians to swear that they will uphold certain ethical standards at all times. Although most doctors do not swear to uphold the original Hippocratic oath, they still take an oath of some sort. There are multiple guidelines outlined in the oath, but a specific rule outlined in the oath is, “”I will neither give a deadly drug to anybody who asked for it, nor will I make a suggestion to this effect””. Those physicians who do take the Hippocratic Oath swear against physician-assisted suicide and euthanasia. While it may be ethically right to uphold the standards of the oath, it may be morally conflicting for the physician in charge. Feelings, such as sympathy and compassion, may cause the doctor to shy away from these guidelines if the patient requests. They may, also, cause the doctor to suggest assisted suicide as an option if the patient is in bad condition.

As deficiencies in care and support that ill patients and their families receive increase, so does support for physician-assisted suicide. It may seem outdated or heartless for a doctor to deny a patient of the right to die, but this is when ethics matter most. Societal principles are meant to be able to withstand changes in society, not to change with society over time. These principles are in place in order to keep doctors from abusing their knowledge. Physician-Assisted Suicide compromises the relationship between a doctor and patient. Patients should be able to trust that their doctor is committed to helping them heal and knows the best option. A doctor should be dedicated to healing the patient to the best of their abilities. Along with the ethical guidelines, there are legal guidelines a doctor must follow as well. If these guidelines change, so will the perspective of the doctor. Dr. Kass from The Heritage Foundation states, “”Only because I knew that I could not and would not kill my patients was I able to enter most fully and intimately into caring for them as they lay dying”” (www.heritage.org). The ethical and legal guidelines that a doctor must follow prevent them from taking the easy way out of situations. Dr. Kass uses an old lady from a nursing home as an example. Imagine being a doctor watching a poor old woman, in poor health, enter the hospital. She has multiple fractured ribs and can barely afford to pay for her hospital bill. A doctor may want to suggest physician-assisted suicide rather than watch the woman struggle physically and financially. As a patient, one may fear that the doctors would see their lives as pointless and encourage death instead of committing to helping the patient survive.

Allowing patients to take the lethal prescription themselves can be dangerous. Unlike Euthanasia, physician-assisted suicide requires a doctor to prescribe a lethal dose of medication and the patient to take it ton their own. In the few states that allows physician-assisted suicide, like Oregon and Vermont, patients are required to meet certain criteria. Patients must have a terminal illness, meaning that their doctor believes that their illness is incurable and likely to lead to death sometime in the near future. As stated above, the patient must be capable of administering the medication themselves. They must also be mentally healthy and conscious of their actions and the consequences that follow. It is required that there are two verbal requests 15 days apart from each other, and one written request. When determining whether or not a patient qualifies for this procedure, there must be two doctors, the primary care physician and a consulting physician, and two witnesses present. This ensures that there is no foul play involved, the process must be completely voluntary. In countries that have legalized physician-assisted suicide, patients are able to receive a prescription for mental illnesses, such as depression. This is a concern in the United States. Patients who believe that their health is a burden to their families or the doctors involved may find physician-assisted suicide an appealing alternative. A patient could meet all of the criteria specified, but hold the intelligence to keep the truth to themselves. According to the New York Times, “”Even today, people with advanced cancer, heart disease or neurological disorders… may qualify for physician-assisted suicide, but be deemed ineligible for hospice under Medicare and Medicaid, either because they are too healthy or still want treatment for their terminal condition.”” (www.nytimes.com). This is just one flaw in the guidelines set by states in order for patients to receive this treatment. A patient who can withstand treatment is still allowed the option of physician aid in dying.

Physician-Assisted suicide is an unethical medical practice. Witnessing a terminal illness affect another human being causes ethical unrest; therefore physician-assisted suicide should not be an option. There are ethical and legal guidelines that physicians, and all doctors, must follow. Poor treatment in medical facilities give rise to physician aid in dying. Death with the help of a doctor may seem appealing to those who are in bad health and a bad place in life. Although there are requirements to receive this lethal prescription, this does not insure that the patient will properly use this opportunity correctly. Two ethical wrongs do not make a right. Despite the ethical guidelines in place to promote maximum healthcare, physicians should spend more time and research into trying to heal a patient before prescribing them the means to end their life.