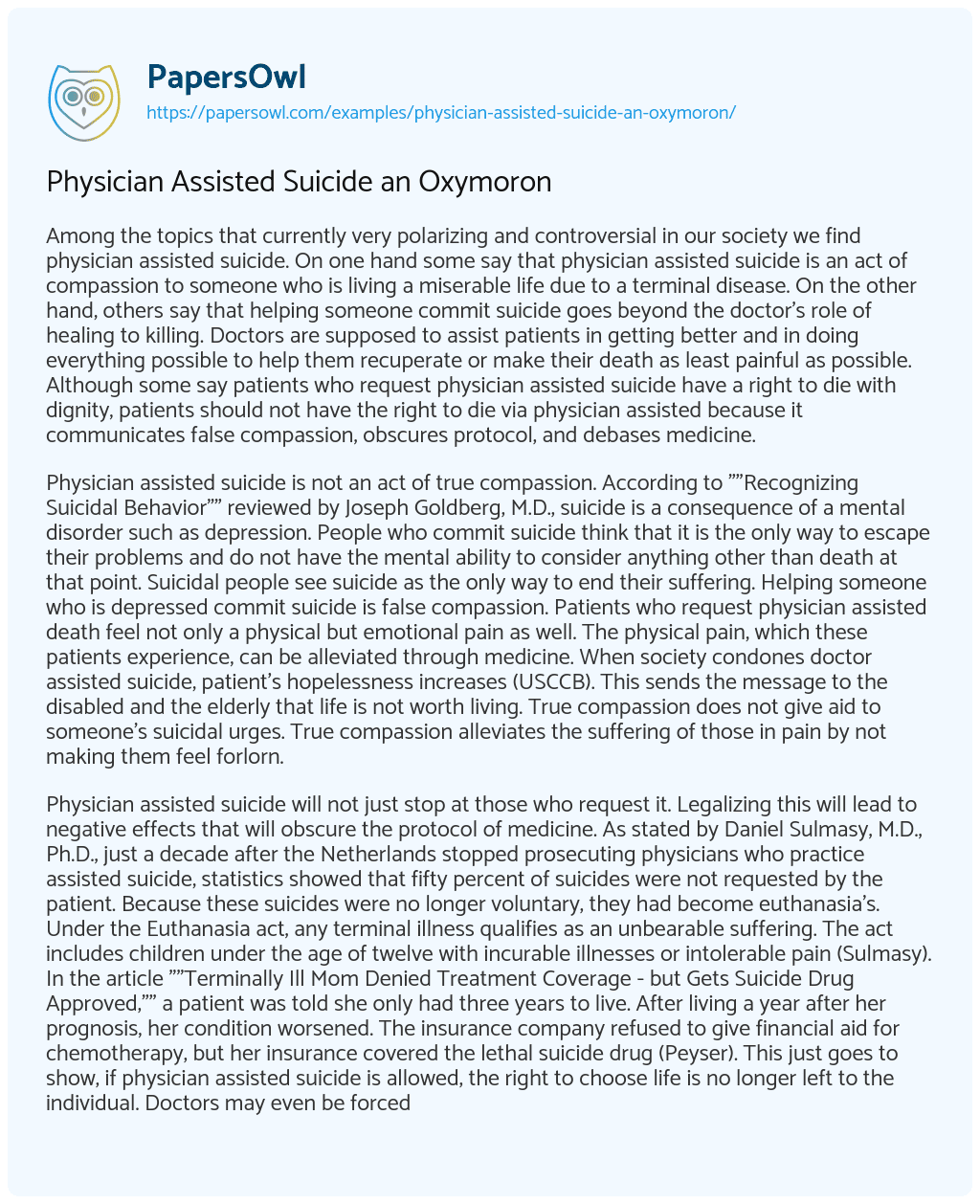 Physician assisted suicide is not an act of true compassion. According to “”Recognizing Suicidal Behavior”” reviewed by Joseph Goldberg, M.D., suicide is a consequence of a mental disorder such as depression. People who commit suicide think that it is the only way to escape their problems and do not have the mental ability to consider anything other than death at that point. Suicidal people see suicide as the only way to end their suffering. Helping someone who is depressed commit suicide is false compassion. Patients who request physician assisted death feel not only a physical but emotional pain as well. The physical pain, which these patients experience, can be alleviated through medicine. When society condones doctor assisted suicide, patient’s hopelessness increases (USCCB). This sends the message to the disabled and the elderly that life is not worth living. True compassion does not give aid to someone’s suicidal urges. True compassion alleviates the suffering of those in pain by not making them feel forlorn.

Physician assisted suicide will not just stop at those who request it. Legalizing this will lead to negative effects that will obscure the protocol of medicine. As stated by Daniel Sulmasy, M.D., Ph.D., just a decade after the Netherlands stopped prosecuting physicians who practice assisted suicide, statistics showed that fifty percent of suicides were not requested by the patient. Because these suicides were no longer voluntary, they had become euthanasia’s. Under the Euthanasia act, any terminal illness qualifies as an unbearable suffering. The act includes children under the age of twelve with incurable illnesses or intolerable pain (Sulmasy). In the article “”Terminally Ill Mom Denied Treatment Coverage – but Gets Suicide Drug Approved,”” a patient was told she only had three years to live. After living a year after her prognosis, her condition worsened. The insurance company refused to give financial aid for chemotherapy, but her insurance covered the lethal suicide drug (Peyser). This just goes to show, if physician assisted suicide is allowed, the right to choose life is no longer left to the individual. Doctors may even be forced to give a deadly drug to a patient who has not requested it if they are a costly burden to society. Legalizing physician assisted suicide will allow insurances to implement regulations that will promote physician assisted suicide as an option.

Physician assisted suicide also debases medicine. Patients are afraid, sick, and vulnerable. The job of a physician as a caregiver is to offer a sympathetic service to those patients. Trust between a doctor and his patient would be destroyed if physician assisted suicide were allowed. One can only imagine the dilemma in trusting someone who has the power to decide who to cure and who to kill. In the Netherlands, where legalizing physician assisted suicide rapidly lead to legalizing euthanasia, the elderly have lost the trust in their doctors, and carry cards that state they do not want to be euthanized (Sulmasy). The Oath of Hippocrates has been taken by every physician for the last 2400 years. The oath states, “”I will keep the patient form harm and injustice.”” It also declares, “”I will neither give a deadly drug to anybody who asks for it, nor will I make a suggestion to this effect”” (qtd. by Sulmasy). This oath is what allows patients to trust their physicians. Doctor assisted suicide goes against the vary basis of medicine. The American Medical Association wisely states that doctor assisted death is incompatible with the role doctors have as healers (qtd. by Frank). The medical field’s aim is to help, physician assisted suicide is the complete opposite of this; it is killing.

Some, like Andrew Lewis, argue that a patient should have the right to die with dignity. In an article Lewis wrote titled, “”Access to Physician Assisted Suicide is an Unalienable Right””, he expresses “”The right to physician-assisted suicide is an inalienable, individual right, which should be recognized throughout the country, not merely because it is consistent with the principles stated in the Constitution, but because it is an inescapable expression of liberty.”” There are many fallacies in his argument. The first noticeable one is that in his article he quotes a piece from the Declaration of Independence, such as, “”life, liberty, and the pursuit of happiness””, and proceeds to call it the Constitution. Those words are not found in the Constitution, but in the Declaration of Independence, which was just a statement to show that America wanted to be free from England. He gives a misleading weight to his argument, since the constitution is the legal foundation of America. In 1997, the Supreme Court ruled that the right for physician assisted death is not granted by the constitution (Alliance defending freedom). Another flaw in his argument is that the supposed “”right”” of someone to die cannot be over imposed over the conscious of the physician. Rights are not without boundaries.

Because physician assisted suicide communicates hopelessness, obscures medical protocol, and debases medicine, even if some argue that the patient should have the right to die with dignity, it should not be allowed. An option that does not involve doctors aiding someone to kill themselves is palliative care. The aim of palliative care is to help those with a terminal illness feel better. Hospice care for terminal patients involves palliative care and allows the disease to take its natural course. If a there is a terminally ill patient, he can request palliative care and painkillers to stop suffering and let nature take its course. These two options, unlike physician assisted suicide, are morally acceptable because it is not asking the physician to aid in ending life.