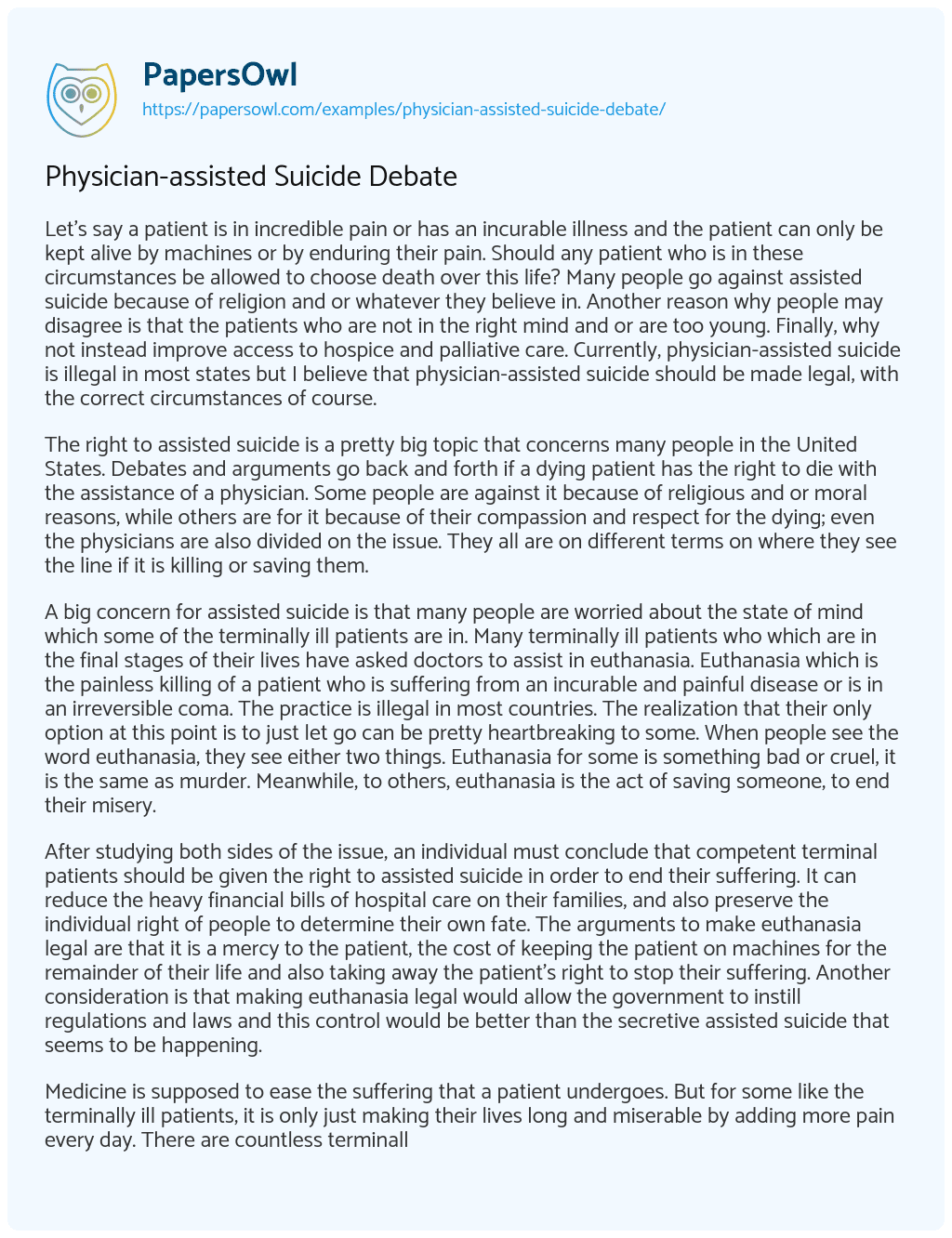 Let’s say a patient is in incredible pain or has an incurable illness and the patient can only be kept alive by machines or by enduring their pain. Should any patient who is in these circumstances be allowed to choose death over this life? Many people go against assisted suicide because of religion and or whatever they believe in. Another reason why people may disagree is that the patients who are not in the right mind and or are too young. Finally, why not instead improve access to hospice and palliative care. Currently, physician-assisted suicide is illegal in most states but I believe that physician-assisted suicide should be made legal, with the correct circumstances of course.

The right to assisted suicide is a pretty big topic that concerns many people in the United States. Debates and arguments go back and forth if a dying patient has the right to die with the assistance of a physician. Some people are against it because of religious and or moral reasons, while others are for it because of their compassion and respect for the dying; even the physicians are also divided on the issue. They all are on different terms on where they see the line if it is killing or saving them.

A big concern for assisted suicide is that many people are worried about the state of mind which some of the terminally ill patients are in. Many terminally ill patients who which are in the final stages of their lives have asked doctors to assist in euthanasia. Euthanasia which is the painless killing of a patient who is suffering from an incurable and painful disease or is in an irreversible coma. The practice is illegal in most countries. The realization that their only option at this point is to just let go can be pretty heartbreaking to some. When people see the word euthanasia, they see either two things. Euthanasia for some is something bad or cruel, it is the same as murder. Meanwhile, to others, euthanasia is the act of saving someone, to end their misery.

After studying both sides of the issue, an individual must conclude that competent terminal patients should be given the right to assisted suicide in order to end their suffering. It can reduce the heavy financial bills of hospital care on their families, and also preserve the individual right of people to determine their own fate. The arguments to make euthanasia legal are that it is a mercy to the patient, the cost of keeping the patient on machines for the remainder of their life and also taking away the patient’s right to stop their suffering. Another consideration is that making euthanasia legal would allow the government to instill regulations and laws and this control would be better than the secretive assisted suicide that seems to be happening.

Medicine is supposed to ease the suffering that a patient undergoes. But for some like the terminally ill patients, it is only just making their lives long and miserable by adding more pain every day. There are countless terminally ill patients from the past that have asked their doctors for a final lethal drug that will end all if their prolonged suffering. One argument in opposition to physician-assisted suicide is that because a model for quality end of life care is available through hospice and palliative care programs, there should be no reason anyone would need to seek physician-assisted suicide. In this view, the focus should not be on legalizing physician-assisted suicide, but on improving access to hospice care.

However as good as this might sound there are over 4,000 hospice agencies in the United States, but because of funding restrictions and the rigidity of the Medicare hospice benefit which requires patients to have a life expectancy of six months or less, there are many people however who do not have access to them. So even with improved access to quality end of life care, there will still be rare cases of persistent and untreatable suffering. The most recent statistics we have from Oregon which was in 2014, where physician-assisted suicide is legal, show that 93 percent of patients who went for physician-assisted suicide was on hospice. This goes to show that hospice and palliative care sometimes aren’t always good enough to help the people suffering.

Perhaps one of the biggest arguments to make physician-assisted suicide illegal are that patients who are depressed or living a life without full use of their bodies would choose to die, physicians are not psychologists and they would not be able to determine if the decision was a result of extreme depression. That legalizing this would break our trust in doctor-patient relationships, the old and infirm would see it as their duty to choose assisted suicide and patients who could not say otherwise will still be put to death.

Now those in opposition to physician-assisted suicide argue that there are more legal and morally ethical alternatives to assisted death. Most of these people argue with assisted suicide because of either their moral standards or because of their religion. Some patients may even refuse their medications that will end up prolonging their death.

However, Some patients do not rely on life-sustaining measures to live and still suffer. If we keep using life-sustaining measures it will just end up prolonging their pain and suffering. There is another argument to this about the fact that patients can and even decide to stop drinking or eating just to hasten their deaths. Denying all these results in death happening around one to three weeks, one to three weeks of intense suffering is too much for anyone to have to tolerate, so why should we let them suffer anymore?

There are still some, however, who argue that people shouldn’t be given the right to assisting suicide at all. This claim was countered by a judge by the name of Stephen Reinhardt. From an article in the Houston Chronicle, Judge Reinhardt ruled on this issue by saying that, “”a competent, terminally ill adult, having lived nearly the full measure of his life, has a strong liberty interest in choosing a dignified and humane death rather than being reduced at the end of his existence to a childlike state of helplessness, diapered, sedated, incompetent””. This ruling in my belief is the strongest defense for the right to assisted suicide. No one should ever have to suffer because he or she is denied the right. The terminally ill are being denied the right not to suffer while they are still normal human beings like everyone else.

The final resolution of this physician-assisted suicide debate has yet to be seen and might still even be debated upon in the far future. But because of the low public support on the subject, we may see it become more of a reality in our society. As of now, it is currently legal in Oregon with more bills to legalize it in other states coming up as well. Physician-assisted suicide is also legal in several other countries, such as the Netherlands.