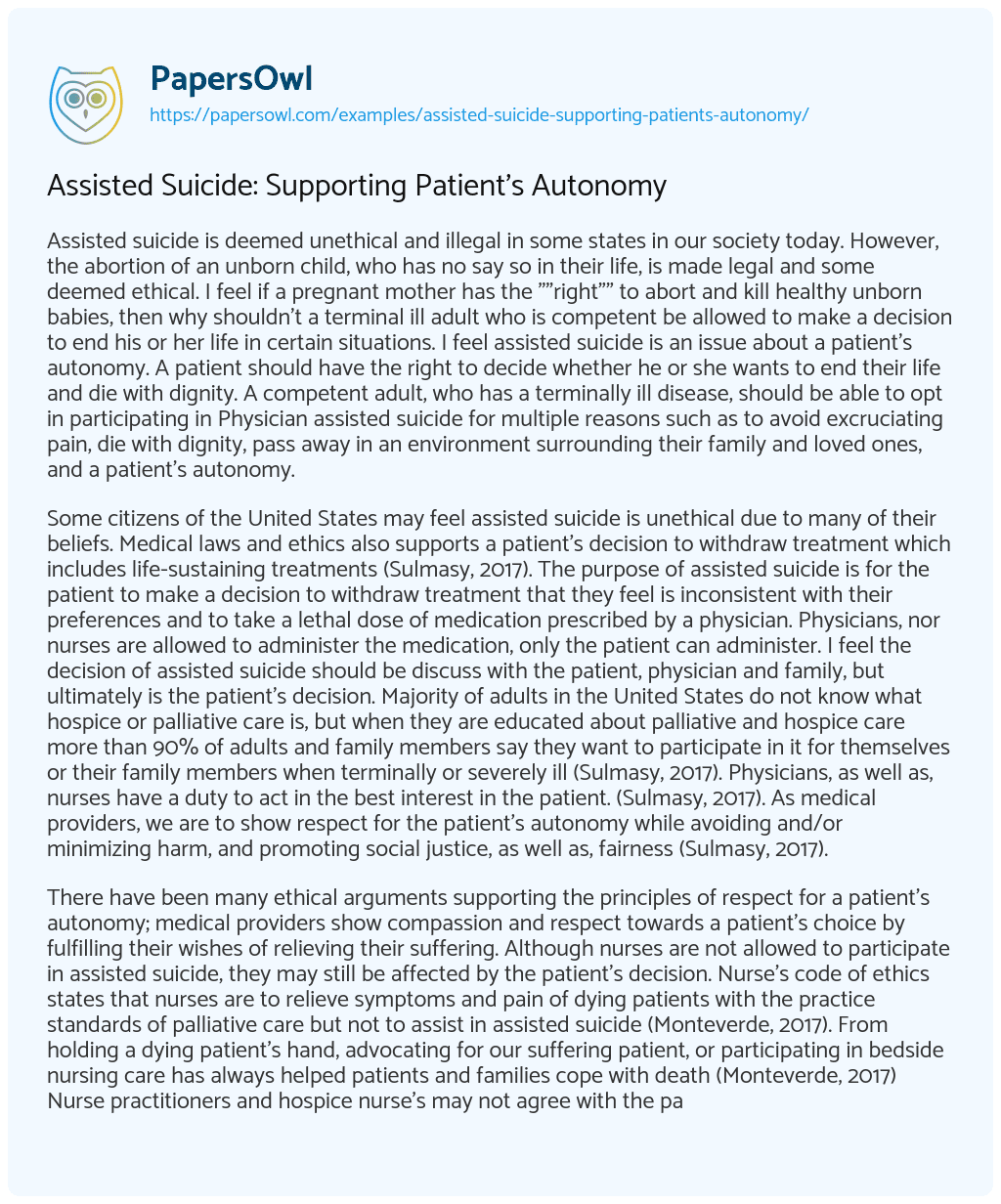 Assisted suicide is deemed unethical and illegal in some states in our society today. However, the abortion of an unborn child, who has no say so in their life, is made legal and some deemed ethical. I feel if a pregnant mother has the “”right”” to abort and kill healthy unborn babies, then why shouldn’t a terminal ill adult who is competent be allowed to make a decision to end his or her life in certain situations. I feel assisted suicide is an issue about a patient’s autonomy. A patient should have the right to decide whether he or she wants to end their life and die with dignity. A competent adult, who has a terminally ill disease, should be able to opt in participating in Physician assisted suicide for multiple reasons such as to avoid excruciating pain, die with dignity, pass away in an environment surrounding their family and loved ones, and a patient’s autonomy.

Some citizens of the United States may feel assisted suicide is unethical due to many of their beliefs. Medical laws and ethics also supports a patient’s decision to withdraw treatment which includes life-sustaining treatments (Sulmasy, 2017). The purpose of assisted suicide is for the patient to make a decision to withdraw treatment that they feel is inconsistent with their preferences and to take a lethal dose of medication prescribed by a physician. Physicians, nor nurses are allowed to administer the medication, only the patient can administer. I feel the decision of assisted suicide should be discuss with the patient, physician and family, but ultimately is the patient’s decision. Majority of adults in the United States do not know what hospice or palliative care is, but when they are educated about palliative and hospice care more than 90% of adults and family members say they want to participate in it for themselves or their family members when terminally or severely ill (Sulmasy, 2017). Physicians, as well as, nurses have a duty to act in the best interest in the patient. (Sulmasy, 2017). As medical providers, we are to show respect for the patient’s autonomy while avoiding and/or minimizing harm, and promoting social justice, as well as, fairness (Sulmasy, 2017).

There have been many ethical arguments supporting the principles of respect for a patient’s autonomy; medical providers show compassion and respect towards a patient’s choice by fulfilling their wishes of relieving their suffering. Although nurses are not allowed to participate in assisted suicide, they may still be affected by the patient’s decision. Nurse’s code of ethics states that nurses are to relieve symptoms and pain of dying patients with the practice standards of palliative care but not to assist in assisted suicide (Monteverde, 2017). From holding a dying patient’s hand, advocating for our suffering patient, or participating in bedside nursing care has always helped patients and families cope with death (Monteverde, 2017) Nurse practitioners and hospice nurse’s may not agree with the patient’s decision of participating in assisted suicide; however, they will need to transfer the care of that patient to a physician whom is comfortable ethically and willing to assist the patient with their decision. Assisted suicide has been made legal in some states in the United States, so nurses will expect to answer more questions concerning assisted suicide from patients and family members as more states began to legalize it.

However, I feel Physician assisted suicide is more ethical than abortion for the following reasons: I have seen elderly, as well as, young adults suffer from terminally diseases such as experiencing symptoms of unbearable pain from cancer, End-stage Alzheimer’s, End-stage COPD, and severe cardiomyopathy. Dying patients may be experiencing multiple types of symptoms ranging from psychological symptoms such as: anxiety and depression; somatic symptoms such as: nausea, vomiting, or pain; and existential symptoms such as: indignity or hopelessness. For some patients, they may feel helpless and feel they have no control over their life with terminally ill diseases. Therefore, some patients may feel comfort with the timing of their death and develop control over their life with assisted suicide. Although pain is one of the reasons for a patient to participate in assisted suicide; there have been researches that have shown that 91% loss autonomy, 81% loss dignity, and 89% had a decrease in ability participate in enjoyable everyday activites (Somerville, 2014).

Studies have shown higher rating for preparing for death, for example: saying goodbye to loved ones, than those patients who opted out for assisted suicide. Also, findings show in multiple studies that patients and families who opted to participate in assisted suicide had favorably experience with their relatives. (Gopal. 2015). There are so many benefits not only for patients, but also for family members. There have been multiple researches that have found families of patients who have participated in assisted suicide that felt more prepared and accepting of their loved one’s passing than families of patients who passed away of other causes (Gopal, 2015).

If a mother can make a decision to have an abortion of an healthy unborn child, then a competent adult should choose to participate in assisted suicide. When a physician and a patient meet to discuss about options of assisted suicide, not only Physicians, but other medical staff involved in the treatment team should show respect towards the patient’s autonomy, because the patient has the right to self-determination and to make decisions that is right for themselves (Somerville, 2014). I feel in the health care a patient’s autonomy is very important, should be made priority, and valued. When determining which patient’s meet criteria for assisted suicide, physicians take into consideration medical prognosis, mentally competent, and if the patient can give consent voluntary (Somerville, 2014).

I feel a terminally ill patient should have the right to be allowed to choose to participate in assisted suicide; especially if they are experiencing symptoms of their condition because there is no cure for their symptoms and they should have the “”right to die”” and not suffer and be miserable. Allowing terminally ill patients to participate in assisted suicide, will give them control over their life and be able to die in dignity. I feel if a patient has the ability to make choices about how they live and making medical decisions when their healthy, then they should have the choice to determine the conditions of their demise. In these times of modern medicine, our society has a difficult time realizing and accepting life comes to an end and not always need to be preserved just because treatment exists.