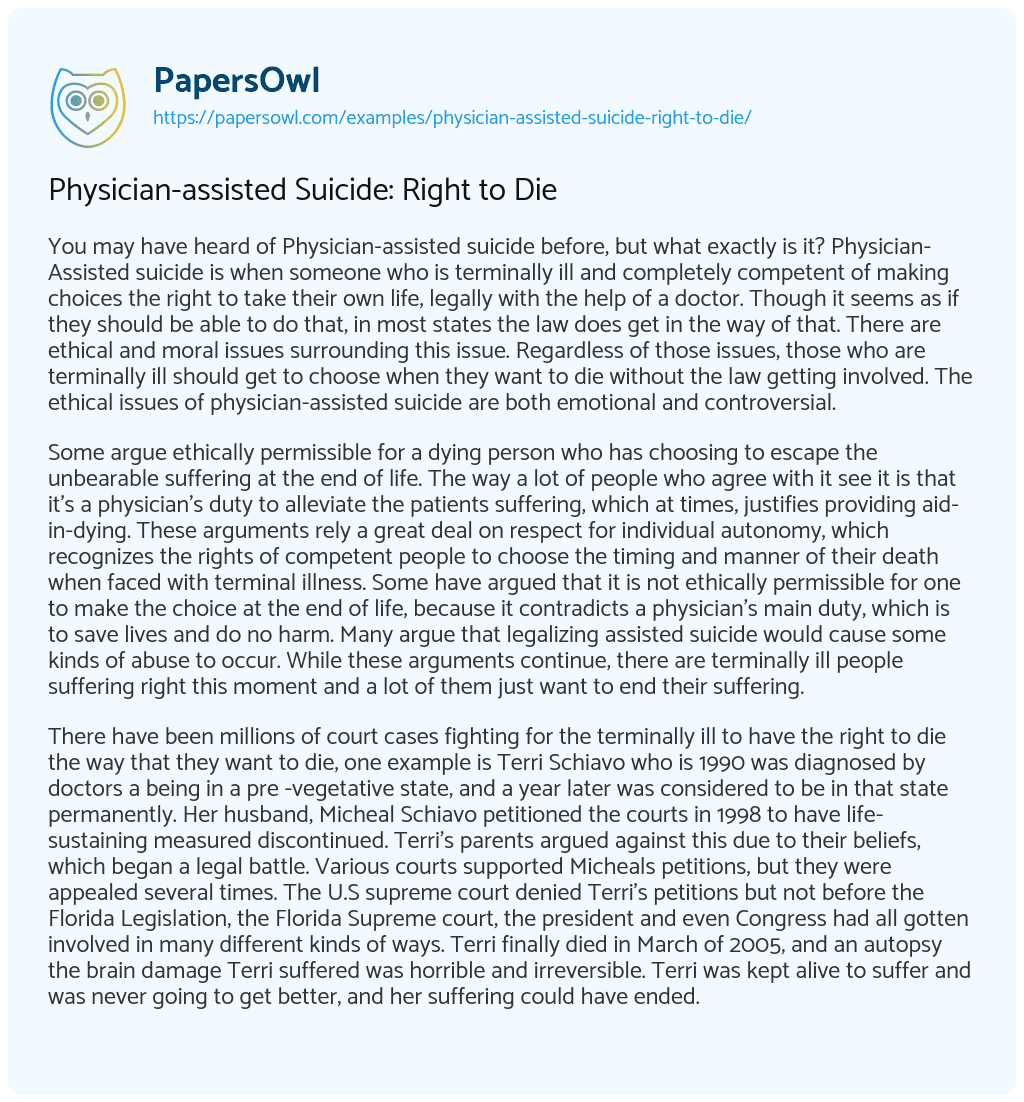 You may have heard of Physician-assisted suicide before, but what exactly is it? Physician-Assisted suicide is when someone who is terminally ill and completely competent of making choices the right to take their own life, legally with the help of a doctor. Though it seems as if they should be able to do that, in most states the law does get in the way of that. There are ethical and moral issues surrounding this issue. Regardless of those issues, those who are terminally ill should get to choose when they want to die without the law getting involved. The ethical issues of physician-assisted suicide are both emotional and controversial.

Some argue ethically permissible for a dying person who has choosing to escape the unbearable suffering at the end of life. The way a lot of people who agree with it see it is that it’s a physician’s duty to alleviate the patients suffering, which at times, justifies providing aid-in-dying. These arguments rely a great deal on respect for individual autonomy, which recognizes the rights of competent people to choose the timing and manner of their death when faced with terminal illness. Some have argued that it is not ethically permissible for one to make the choice at the end of life, because it contradicts a physician’s main duty, which is to save lives and do no harm. Many argue that legalizing assisted suicide would cause some kinds of abuse to occur. While these arguments continue, there are terminally ill people suffering right this moment and a lot of them just want to end their suffering.

There have been millions of court cases fighting for the terminally ill to have the right to die the way that they want to die, one example is Terri Schiavo who is 1990 was diagnosed by doctors a being in a pre -vegetative state, and a year later was considered to be in that state permanently. Her husband, Micheal Schiavo petitioned the courts in 1998 to have life-sustaining measured discontinued. Terri’s parents argued against this due to their beliefs, which began a legal battle. Various courts supported Micheals petitions, but they were appealed several times. The U.S supreme court denied Terri’s petitions but not before the Florida Legislation, the Florida Supreme court, the president and even Congress had all gotten involved in many different kinds of ways. Terri finally died in March of 2005, and an autopsy the brain damage Terri suffered was horrible and irreversible. Terri was kept alive to suffer and was never going to get better, and her suffering could have ended.