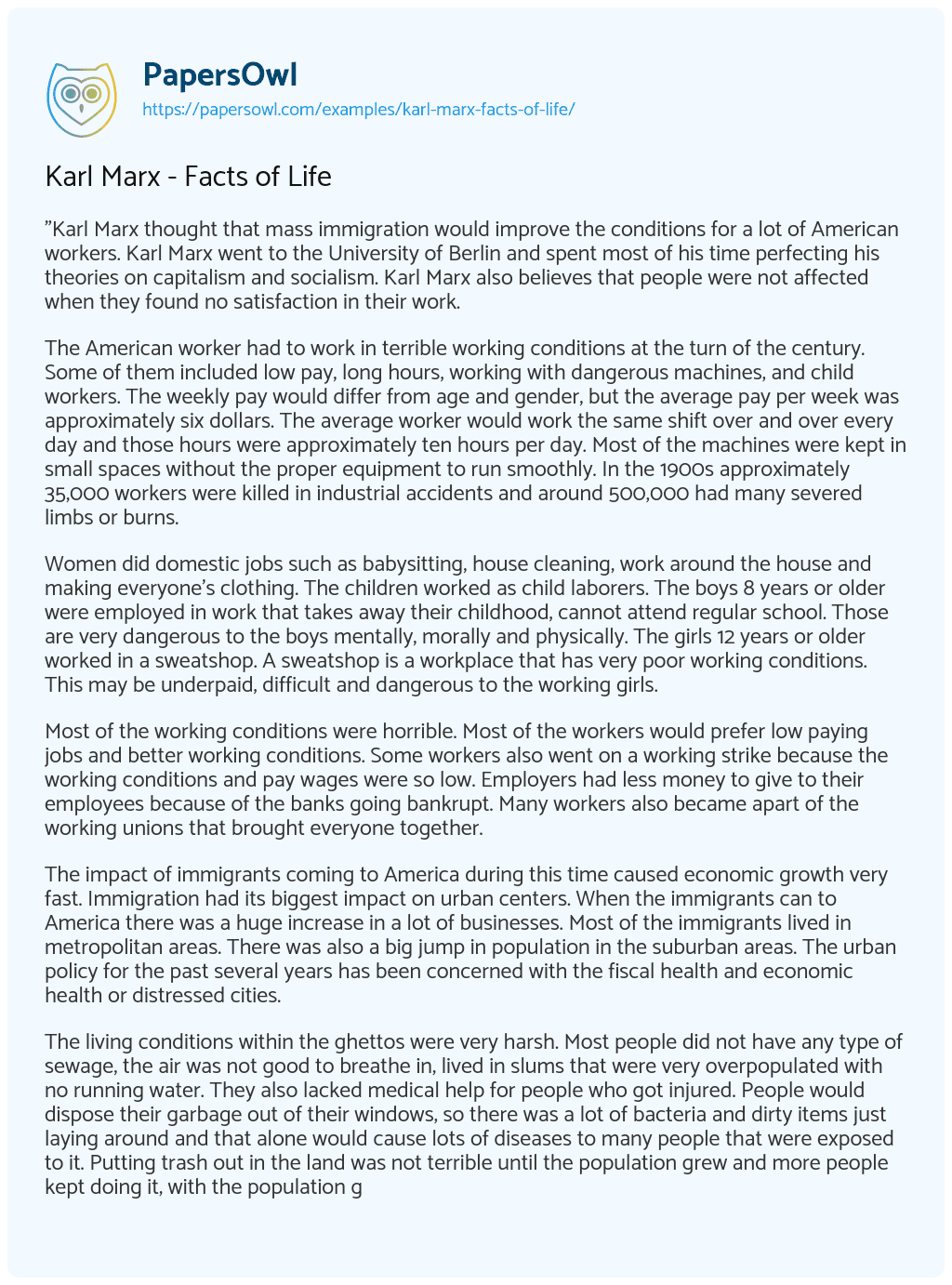 “Karl Marx thought that mass immigration would improve the conditions for a lot of American workers. Karl Marx went to the University of Berlin and spent most of his time perfecting his theories on capitalism and socialism. Karl Marx also believes that people were not affected when they found no satisfaction in their work.

The American worker had to work in terrible working conditions at the turn of the century. Some of them included low pay, long hours, working with dangerous machines, and child workers. The weekly pay would differ from age and gender, but the average pay per week was approximately six dollars. The average worker would work the same shift over and over every day and those hours were approximately ten hours per day. Most of the machines were kept in small spaces without the proper equipment to run smoothly. In the 1900s approximately 35,000 workers were killed in industrial accidents and around 500,000 had many severed limbs or burns.

Women did domestic jobs such as babysitting, house cleaning, work around the house and making everyone’s clothing. The children worked as child laborers. The boys 8 years or older were employed in work that takes away their childhood, cannot attend regular school. Those are very dangerous to the boys mentally, morally and physically. The girls 12 years or older worked in a sweatshop. A sweatshop is a workplace that has very poor working conditions. This may be underpaid, difficult and dangerous to the working girls.

The impact of immigrants coming to America during this time caused economic growth very fast. Immigration had its biggest impact on urban centers. When the immigrants can to America there was a huge increase in a lot of businesses. Most of the immigrants lived in metropolitan areas. There was also a big jump in population in the suburban areas. The urban policy for the past several years has been concerned with the fiscal health and economic health or distressed cities.

The living conditions within the ghettos were very harsh. Most people did not have any type of sewage, the air was not good to breathe in, lived in slums that were very overpopulated with no running water. They also lacked medical help for people who got injured. People would dispose their garbage out of their windows, so there was a lot of bacteria and dirty items just laying around and that alone would cause lots of diseases to many people that were exposed to it. Putting trash out in the land was not terrible until the population grew and more people kept doing it, with the population growth that means that the space to throw garbage was getting smaller and smaller by the day. Some of the deaths were caused by the lack of sanitation and not enough space for people to put their garbage.”

Poverty Life in the Industrial Age