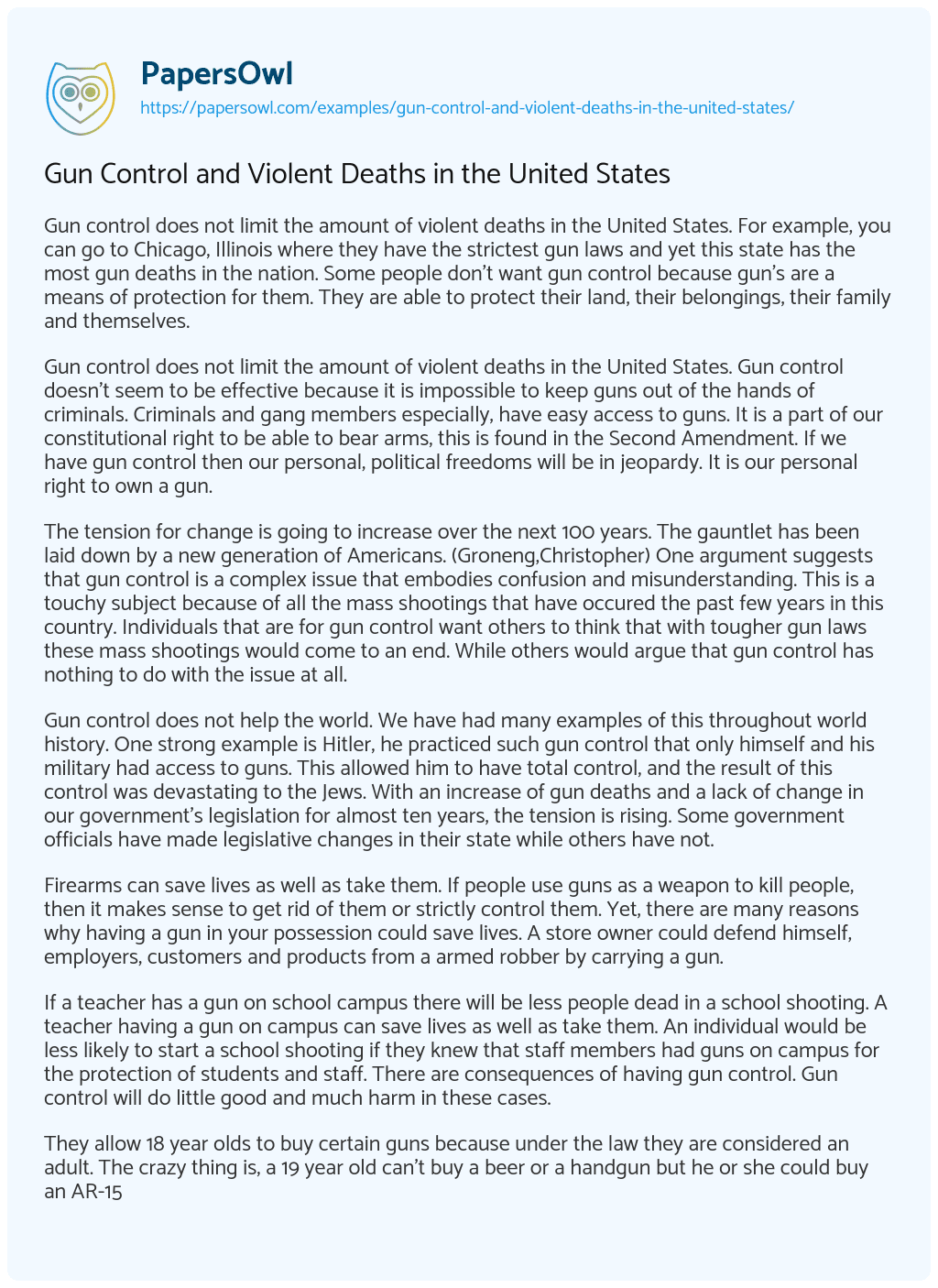 Gun control does not limit the amount of violent deaths in the United States. For example, you can go to Chicago, Illinois where they have the strictest gun laws and yet this state has the most gun deaths in the nation. Some people don’t want gun control because gun’s are a means of protection for them. They are able to protect their land, their belongings, their family and themselves.

Gun control does not limit the amount of violent deaths in the United States. Gun control doesn’t seem to be effective because it is impossible to keep guns out of the hands of criminals. Criminals and gang members especially, have easy access to guns. It is a part of our constitutional right to be able to bear arms, this is found in the Second Amendment. If we have gun control then our personal, political freedoms will be in jeopardy. It is our personal right to own a gun.

The tension for change is going to increase over the next 100 years. The gauntlet has been laid down by a new generation of Americans. (Groneng,Christopher) One argument suggests that gun control is a complex issue that embodies confusion and misunderstanding. This is a touchy subject because of all the mass shootings that have occured the past few years in this country. Individuals that are for gun control want others to think that with tougher gun laws these mass shootings would come to an end. While others would argue that gun control has nothing to do with the issue at all.

Gun control does not help the world. We have had many examples of this throughout world history. One strong example is Hitler, he practiced such gun control that only himself and his military had access to guns. This allowed him to have total control, and the result of this control was devastating to the Jews. With an increase of gun deaths and a lack of change in our government’s legislation for almost ten years, the tension is rising. Some government officials have made legislative changes in their state while others have not.

Firearms can save lives as well as take them. If people use guns as a weapon to kill people, then it makes sense to get rid of them or strictly control them. Yet, there are many reasons why having a gun in your possession could save lives. A store owner could defend himself, employers, customers and products from a armed robber by carrying a gun.

If a teacher has a gun on school campus there will be less people dead in a school shooting. A teacher having a gun on campus can save lives as well as take them. An individual would be less likely to start a school shooting if they knew that staff members had guns on campus for the protection of students and staff. There are consequences of having gun control. Gun control will do little good and much harm in these cases.

They allow 18 year olds to buy certain guns because under the law they are considered an adult. The crazy thing is, a 19 year old can’t buy a beer or a handgun but he or she could buy an AR-15 under federal law. The minimum age to buy a handgun from a licensed dealer is 21. But the age limit drops to 18 if the gun is being bought from a private, unlicensed seller. This could be someone on line, or a neighbor or at a gun show.

Gun control is bad for some places because people don’t have guns to protect themselves. After the mass shooting in Las Vegas that left 58 people dead and hundreds more wounded they have reopened the debate over the gun control legislation. After the school shooting in Florida there has been a strong debate about raising the legal age to buy any gun to the age of 21. There is a strong push for comprehensive background checks while focusing on mental health.

Creating new restrictions for shotguns and rifles will stop law abiding adults ages 18 to 20 of their right to self-protection. While the NRA supports efforts to prevent individuals who are a danger to others or themselves from being able to purchase firearms, they oppose gun control measures that serve to punish law abiding citizens.

The power of government depends on state law. While gun control does affect people’s political view, there are a lot of people who think stricter gun laws will decrease violent crimes. Many people are mad about the role guns have in American society. Gun control can and is affect people’s lives.

Some people don’t want gun control because gun’s are a means of protection for them. As an American citizen, the second amendment of the Constitution gives you the right and privilege to own a gun. The Founding Fathers guaranteed that this right shall not be infringed upon. Yet, the freedoms and rights of this country come at a cost.

Gun Control and Violent Deaths in the United States. (2019, Dec 07). Retrieved from https://papersowl.com/examples/gun-control-and-violent-deaths-in-the-united-states/

The Second Amendment of the United States Constitution and Gun Control