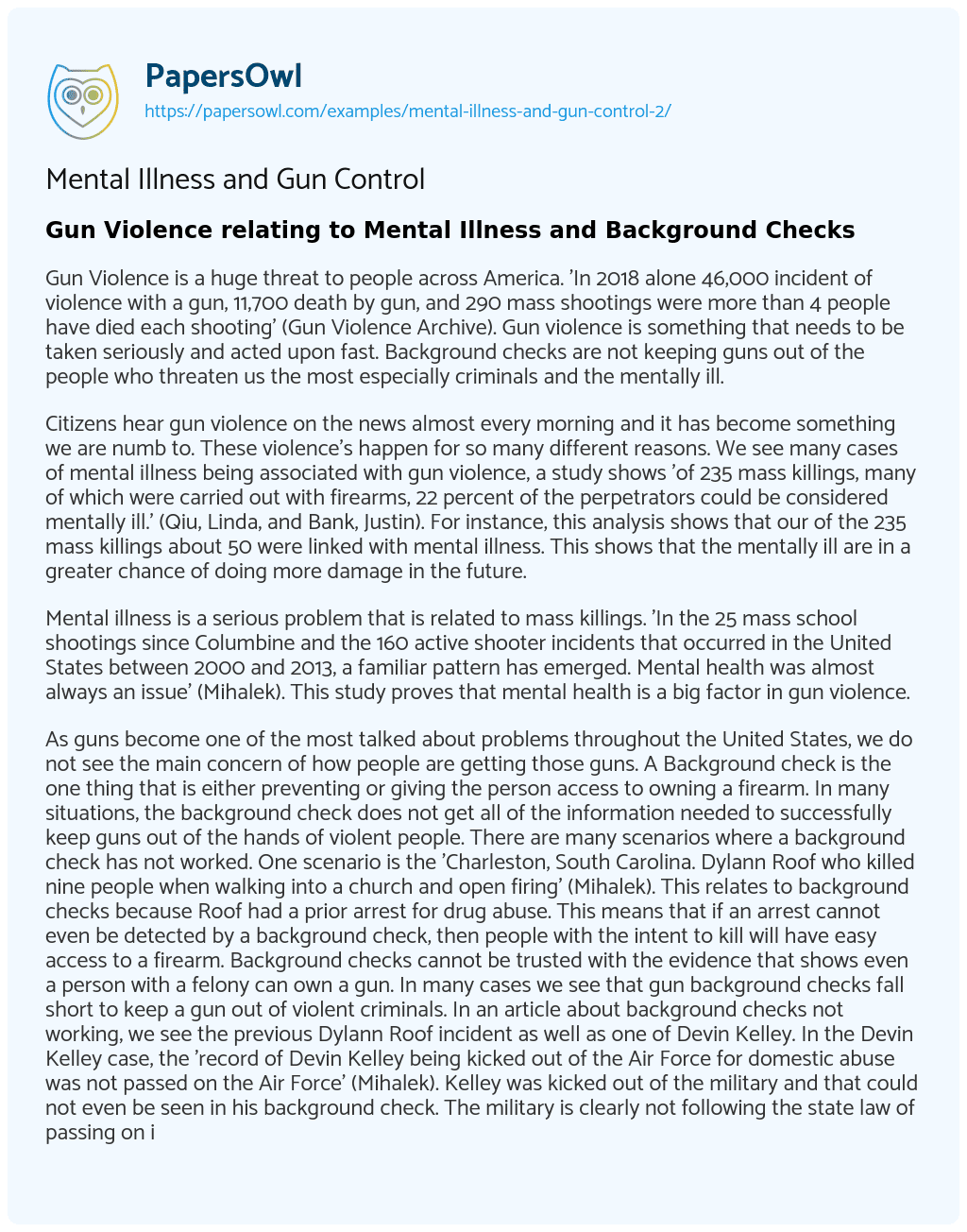 Gun Violence is a huge threat to people across America. ‘In 2018 alone 46,000 incident of violence with a gun, 11,700 death by gun, and 290 mass shootings were more than 4 people have died each shooting’ (Gun Violence Archive). Gun violence is something that needs to be taken seriously and acted upon fast. Background checks are not keeping guns out of the people who threaten us the most especially criminals and the mentally ill.

Citizens hear gun violence on the news almost every morning and it has become something we are numb to. These violence’s happen for so many different reasons. We see many cases of mental illness being associated with gun violence, a study shows ‘of 235 mass killings, many of which were carried out with firearms, 22 percent of the perpetrators could be considered mentally ill.’ (Qiu, Linda, and Bank, Justin). For instance, this analysis shows that our of the 235 mass killings about 50 were linked with mental illness. This shows that the mentally ill are in a greater chance of doing more damage in the future.

Mental illness is a serious problem that is related to mass killings. ‘In the 25 mass school shootings since Columbine and the 160 active shooter incidents that occurred in the United States between 2000 and 2013, a familiar pattern has emerged. Mental health was almost always an issue’ (Mihalek). This study proves that mental health is a big factor in gun violence.

As guns become one of the most talked about problems throughout the United States, we do not see the main concern of how people are getting those guns. A Background check is the one thing that is either preventing or giving the person access to owning a firearm. In many situations, the background check does not get all of the information needed to successfully keep guns out of the hands of violent people. There are many scenarios where a background check has not worked. One scenario is the ‘Charleston, South Carolina. Dylann Roof who killed nine people when walking into a church and open firing’ (Mihalek). This relates to background checks because Roof had a prior arrest for drug abuse. This means that if an arrest cannot even be detected by a background check, then people with the intent to kill will have easy access to a firearm. Background checks cannot be trusted with the evidence that shows even a person with a felony can own a gun. In many cases we see that gun background checks fall short to keep a gun out of violent criminals. In an article about background checks not working, we see the previous Dylann Roof incident as well as one of Devin Kelley. In the Devin Kelley case, the ‘record of Devin Kelley being kicked out of the Air Force for domestic abuse was not passed on the Air Force’ (Mihalek). Kelley was kicked out of the military and that could not even be seen in his background check. The military is clearly not following the state law of passing on information that can keep the gun out of these violent humans. Devin Kelly later went to kill two dozen people at a church in Texas. The society is in threat of any type of gun violence because there is one thing preventing someone from getting a gun.

How can background checks relate to mental illness? This is another problem related to background checks and how the mentally ill cause a big threat to the economy if obtaining a gun. In many mass killing, the gunman is typically mentally unstable. Background checks and mental illness can be seen throughout the school shooting in Parkland, Florida. First, he was ‘expelled from school, and the school’s administration was concerned about his violent tendencies’ (Mihalek). This is a mental illness that shows he wanted to do violent actions and his teachers could even tell he wanted to be violent. I believe that a background check should have an in-depth search wear it should show if a person got expelled from school and why. We see this mental illness as terrible for the intent to kill and be happy about it. I remember seeing on the news that he posted his guns on social media and saying thing like he wants to do harm to those he believed did harm to him.

Many citizens of the United States can say that this is violating the second amendment and it could be invading their privacy. The second amendment states ‘A well-regulated Militia, being necessary to the security of a free State, the right of the people to keep and bear Arms, shall not be infringed’ (Strasser). We can see how this goes against background checks and how the government might be trying to take away guns from a certain group of people. First off the background check sees if you have had in prior criminal activity. A background check keeps guns out of the hands of people with dangerous histories. Then this leads to other laws that this person has broken of being a criminal in the eyes of the government. So, in fact, no person should obtain a gun with other laws broken. I believe you have to be respecting all of the amendments to be able to say that you can bear arms according to the second amendment. When you are breaking other laws and trying to get a gun which leads to your background check coming back denied. So the second amendment in my eye can only be respected by those people who respect all of the other amendments and stay true to all.

Before taking away all guns from people and ultimately trying to ban them. The first step is stricter background checks because criminals are getting around the one thing that prevents them from getting a gun. Introducing a new background check will make it harder for people to get around the check, unlike the one that has been around for twenty-five years. The mentally ill have been shown to be a threat to gun violence. The mentally ill and criminals should not own guns because at any second they could pull the trigger on a someone you may know.

Gun Control and the Mental Health in America

How Many People with Serious Mental Illness are Homeless?

Mental Health Screenings and the Effect on Gun Violence