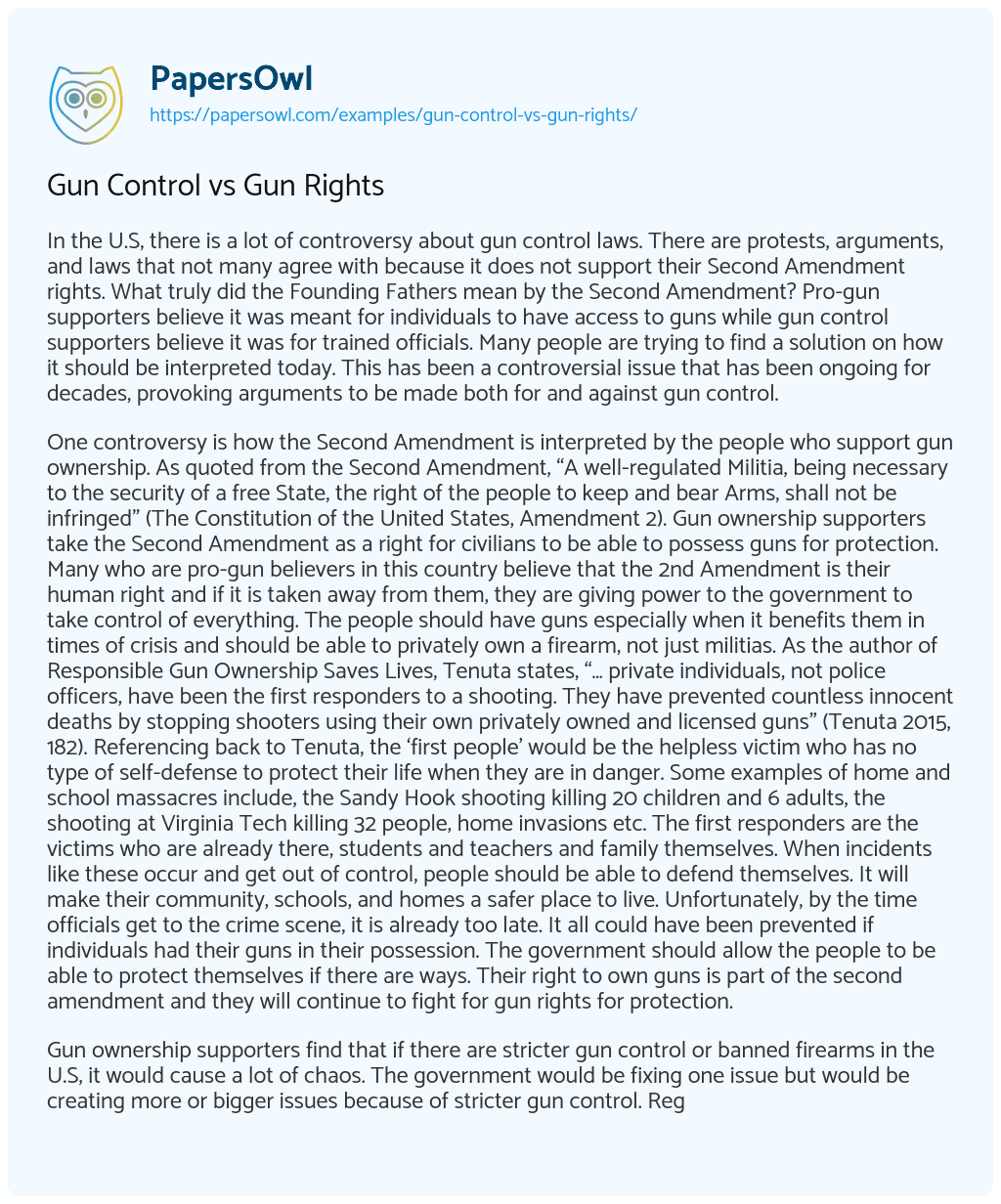 In the U.S, there is a lot of controversy about gun control laws. There are protests, arguments, and laws that not many agree with because it does not support their Second Amendment rights. What truly did the Founding Fathers mean by the Second Amendment? Pro-gun supporters believe it was meant for individuals to have access to guns while gun control supporters believe it was for trained officials. Many people are trying to find a solution on how it should be interpreted today. This has been a controversial issue that has been ongoing for decades, provoking arguments to be made both for and against gun control.

One controversy is how the Second Amendment is interpreted by the people who support gun ownership. As quoted from the Second Amendment, “A well-regulated Militia, being necessary to the security of a free State, the right of the people to keep and bear Arms, shall not be infringed” (The Constitution of the United States, Amendment 2). Gun ownership supporters take the Second Amendment as a right for civilians to be able to possess guns for protection. Many who are pro-gun believers in this country believe that the 2nd Amendment is their human right and if it is taken away from them, they are giving power to the government to take control of everything. The people should have guns especially when it benefits them in times of crisis and should be able to privately own a firearm, not just militias. As the author of Responsible Gun Ownership Saves Lives, Tenuta states, “… private individuals, not police officers, have been the first responders to a shooting. They have prevented countless innocent deaths by stopping shooters using their own privately owned and licensed guns” (Tenuta 2015, 182). Referencing back to Tenuta, the ‘first people’ would be the helpless victim who has no type of self-defense to protect their life when they are in danger. Some examples of home and school massacres include, the Sandy Hook shooting killing 20 children and 6 adults, the shooting at Virginia Tech killing 32 people, home invasions etc. The first responders are the victims who are already there, students and teachers and family themselves. When incidents like these occur and get out of control, people should be able to defend themselves. It will make their community, schools, and homes a safer place to live. Unfortunately, by the time officials get to the crime scene, it is already too late. It all could have been prevented if individuals had their guns in their possession. The government should allow the people to be able to protect themselves if there are ways. Their right to own guns is part of the second amendment and they will continue to fight for gun rights for protection.

Gun ownership supporters find that if there are stricter gun control or banned firearms in the U.S, it would cause a lot of chaos. The government would be fixing one issue but would be creating more or bigger issues because of stricter gun control. Regardless of whether there are stricter gun laws for citizens, people will figure out other alternatives to obtain a gun illegally. In support, Navago states, “Even if gun control laws were made much stricter, these criminals would still be able to obtain illegal weapons and use them to inflict harm and commit violent crimes. The only difference would be that the people who are not criminals would not have the ability to defend themselves” (9 Principal Pros and Cons of Gun Control). Now if only criminals had the possession of weapons, innocent people who are being attacked will not have any protection or self-defense. Additionally, this will cause individuals to obtain a firearm illegally since they cannot get one legally. For example, the 2014 NRA-ILA Firearms Fact Card stated, ‘[M]ost criminals obtain guns from theft, the black market, or ‘straw purchasers’—people who can pass a background check and who buy guns for criminals. Furthermore, none of the high-profile crimes that they cite involved guns bought without a background check…” (NRA-ILA Biography, 2014). Thus, illegal gun trade would increase significantly, regardless if laws get stricter there are always going to be methods for criminals and such people to obtain weapons with or without permission. Plus, those who would commit a crime using firearms would have no background check and officials will still not be able to figure out who was the one that committed the crime. The strict countries like the UK and ban their weapons still have high crime rates because they also illegally get weapons from Europe. For example, “Britain has the highest rate of violent crime in Europe, more so than the United States or even South Africa. They also have the second highest overall crime rate in the European Union. In 2008, Britain had a violent crime rate nearly five times higher than the United States (2034 vs. 446 per 100,000 population)” (Gun Control and Crime in Non-US Countries 2018). In other words, they are saying gun control will not work.

Those who are strongly for gun control claim that the true meaning of the Second Amendment is that the “militia” are the ones who should have the power to obtain guns and carry them, not individuals. Gun-control supporters, “argue that the right to bear arms should be given only to organized groups, like the National Guard, a reserve military force that replaced the state militias after the Civil War” (Editors, History.com 2017). As some interpret this, back then it was the state militias who were in control of firearms before the Civil War. However, now that time has passed, there is the military force (Marines, Army, Air Force) or trained officials (police officers) should be the ones in control. Any type of firearms should be used by trained officials since they are taught to properly use them. When individuals have firearms, they are rarely used for self-defense and, unfortunately, are used in suicides or violent crimes. For example, “Between 1999 and 2013 there were 270,237 firearm suicides in the United States, accounting for about 52% of all suicides during those years” (Gun Control – ProCon.org). Also, statistics show that gun ownership does not prevent violent crime, “Of the 29,618,300 violent crimes committed between 2007 and 2011, 0.79% of victims (235,700) protected themselves with a threat of use or use of a firearm, the least-employed protective behavior” (Czyzon 2015). Gun control would benefit these issues because only gun trained officials would be the ones who are in control of firearms.

Gun control will continue to be a discussion in U.S politics; there will always be people who will be for or against gun rights. Although many people make good arguments to support their rights and use; there will always be counter arguments out there saying otherwise. Any decision made will affect people and how they live their lives.