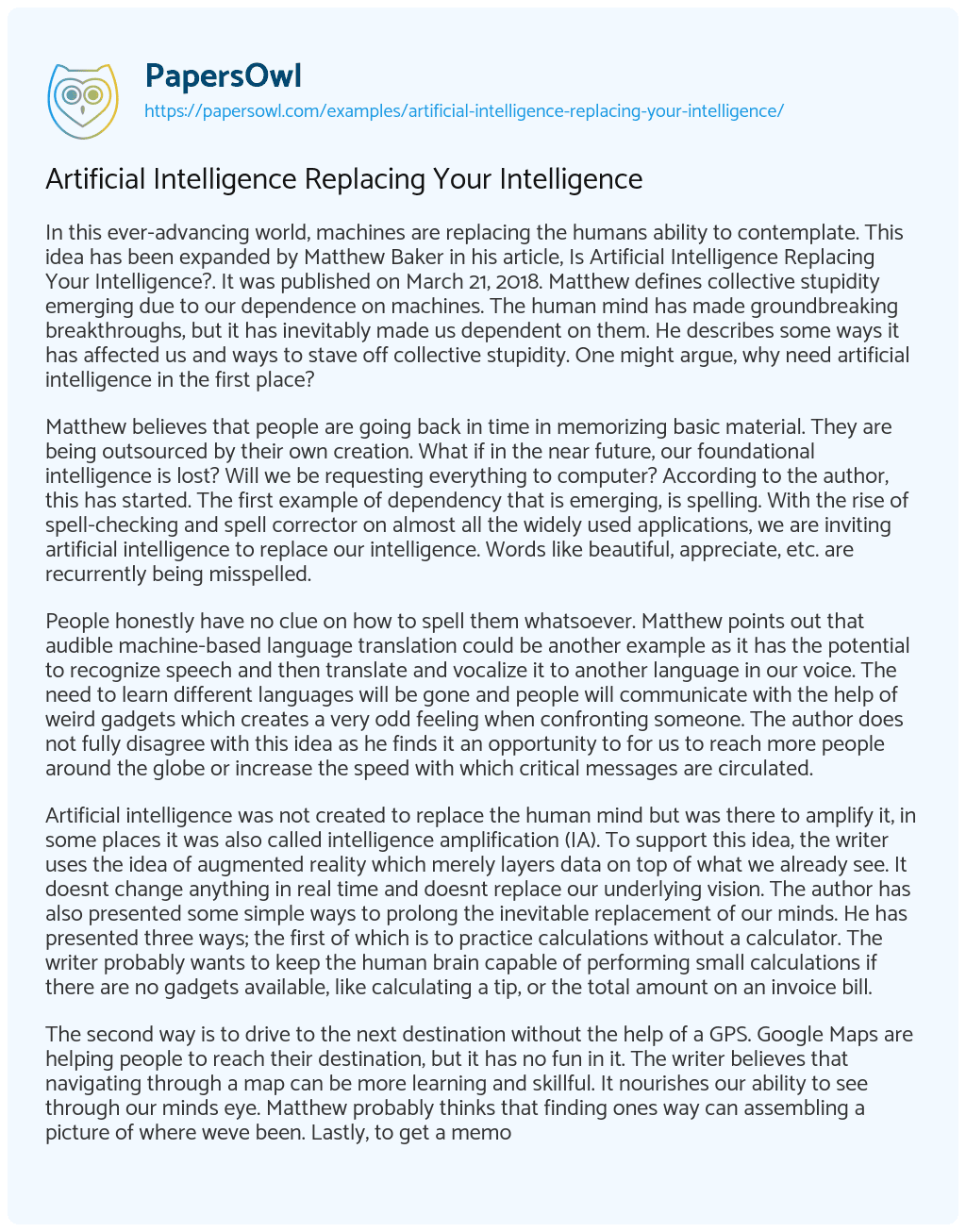 In this ever-advancing world, machines are replacing the humans ability to contemplate. This idea has been expanded by Matthew Baker in his article, Is Artificial Intelligence Replacing Your Intelligence?. It was published on March 21, 2018. Matthew defines collective stupidity emerging due to our dependence on machines. The human mind has made groundbreaking breakthroughs, but it has inevitably made us dependent on them. He describes some ways it has affected us and ways to stave off collective stupidity. One might argue, why need artificial intelligence in the first place?

Matthew believes that people are going back in time in memorizing basic material. They are being outsourced by their own creation. What if in the near future, our foundational intelligence is lost? Will we be requesting everything to computer? According to the author, this has started. The first example of dependency that is emerging, is spelling. With the rise of spell-checking and spell corrector on almost all the widely used applications, we are inviting artificial intelligence to replace our intelligence. Words like beautiful, appreciate, etc. are recurrently being misspelled.

People honestly have no clue on how to spell them whatsoever. Matthew points out that audible machine-based language translation could be another example as it has the potential to recognize speech and then translate and vocalize it to another language in our voice. The need to learn different languages will be gone and people will communicate with the help of weird gadgets which creates a very odd feeling when confronting someone. The author does not fully disagree with this idea as he finds it an opportunity to for us to reach more people around the globe or increase the speed with which critical messages are circulated.

Artificial intelligence was not created to replace the human mind but was there to amplify it, in some places it was also called intelligence amplification (IA). To support this idea, the writer uses the idea of augmented reality which merely layers data on top of what we already see. It doesnt change anything in real time and doesnt replace our underlying vision. The author has also presented some simple ways to prolong the inevitable replacement of our minds. He has presented three ways; the first of which is to practice calculations without a calculator. The writer probably wants to keep the human brain capable of performing small calculations if there are no gadgets available, like calculating a tip, or the total amount on an invoice bill.

The second way is to drive to the next destination without the help of a GPS. Google Maps are helping people to reach their destination, but it has no fun in it. The writer believes that navigating through a map can be more learning and skillful. It nourishes our ability to see through our minds eye. Matthew probably thinks that finding ones way can assembling a picture of where weve been. Lastly, to get a memory test to improve on further memory loss. By absorbing more and more content, but we neglect deep processing. We listen to podcasts, read online articles, and scan social newsfeeds. We just dont process our information. Deep processing is the ability to focus and build meaning through previous knowledge.

By testing your brain, you can check your short-term memory, reasoning and verbal ability, which can be used to understand your situation. At the end of the article, the writer was readied to embrace the involvement of AI in our lives for the future but, his closing sentences ; However, the benefits are likely to have other setbacks. Case in point: It would be a shame if the advancement in driverless cars renders current or future generations unable to drive on their own should the need arise., does ask a very important question in everyones mind; Do we really depend upon technology that much?

The article uses immaculate writing techniques to elaborate its view point. The article focuses more on the negative aspects of AI as he is more involved to the fact that AI will eventually replace the humans ability to think. This may not be of big concern to most people as they mostly care about getting things done and not focusing on the path taken.

While it may be true that humankind is tilting more towards comfort provided by machines which in turn may turn them lethargic, some old school folks do not like to indulge themselves into this mess. According to the writer, common school subjects like reading, writing, and arithmetic should be ever persons skill point. This must be the case because we cannot rely on a mere calculator to solve our smallest calculations, the ability to solve mathematical queries is an art that should be possessed by all. The spelling problem has spread like wild fire and the writer has a valid point; simple words which are used in our daily lives are being misspelled on every encounter.

It might be argued that the spell-checkers may help in times of crisis where you may need to compile a document under limited time. Matthew believes that the future holds an even advanced technique. How could a machine replicate our voice? This may be too farfetched but, having a computer to communicate for us will be the time when human interaction will go to its lowest. One may have to agree with the author, when AI is applied correctly it can do wonders in that task.

AI is just a tool to enhance our pre-existing knowledge not take its place. As Bob High says, Our tools tend to be most valuable when they’re amplifying us, when they’re extending our reach, when they’re increasing our strength, when they’re allowing us to do things that we can’t do by ourselves as human beings. The writers solutions to prolong the lifetime of our actual intelligence can be termed as helpful but more or less it can be said that they are baseless. We could see people calculating fairs themselves in restaurants just to test out their math. This may not be a long-term activity as technology has had a very deep effect on us that we cannot let a second go by without getting our heads soaked in the sea of internet.

Furthermore, not using GPS in our daily life doesnt change anything because when people travel through the same place several times they naturally get a rough mind map made of the place the GPS system doesnt change anything. Even Uber or Lyft drivers find it quite easy to navigate through places they move from dusk till dawn. This notion of the writer seems to be weak and can easily be refuted and proven wrong. The writer telling us to get a brain test seems to be rather offensive as he believes that we are not able to hold a huge amount of data in our brain. This can be true in some cases but for the most part, our brain is the mother of all computers.

We can perform certain exercises to make our brain power stronger and enduring but in reality, no one would be that willing to perform such activities. The writer tries to provide what he thinks may be the true solution to protract the inevitable takeover of AI but even he realizes that this fact can no longer be neglected; people are already ready to accept this fact. The question asked at the last has a very deep meaning to it, self-driving cars can be of real concern as the other generations will not get to experience the thrill of driving a manual car. Who knows, they might not get the chance to even see them.

The article has been composed exceptionally with great grammar. The idea can also be understood quite well but, the main problem of it is that the points to support the views of the writer are vague and flimsy. The writer could use more points which would have made an imprint of the readers mind in many dimensions. He should also consider that humans have built AI just to help them in difficulties of greater magnitude, this implementation on people can be seen as an experiment and so far, it has been a success and has changed the lives of various people. The hostile effects on the other hand, make complete sense.