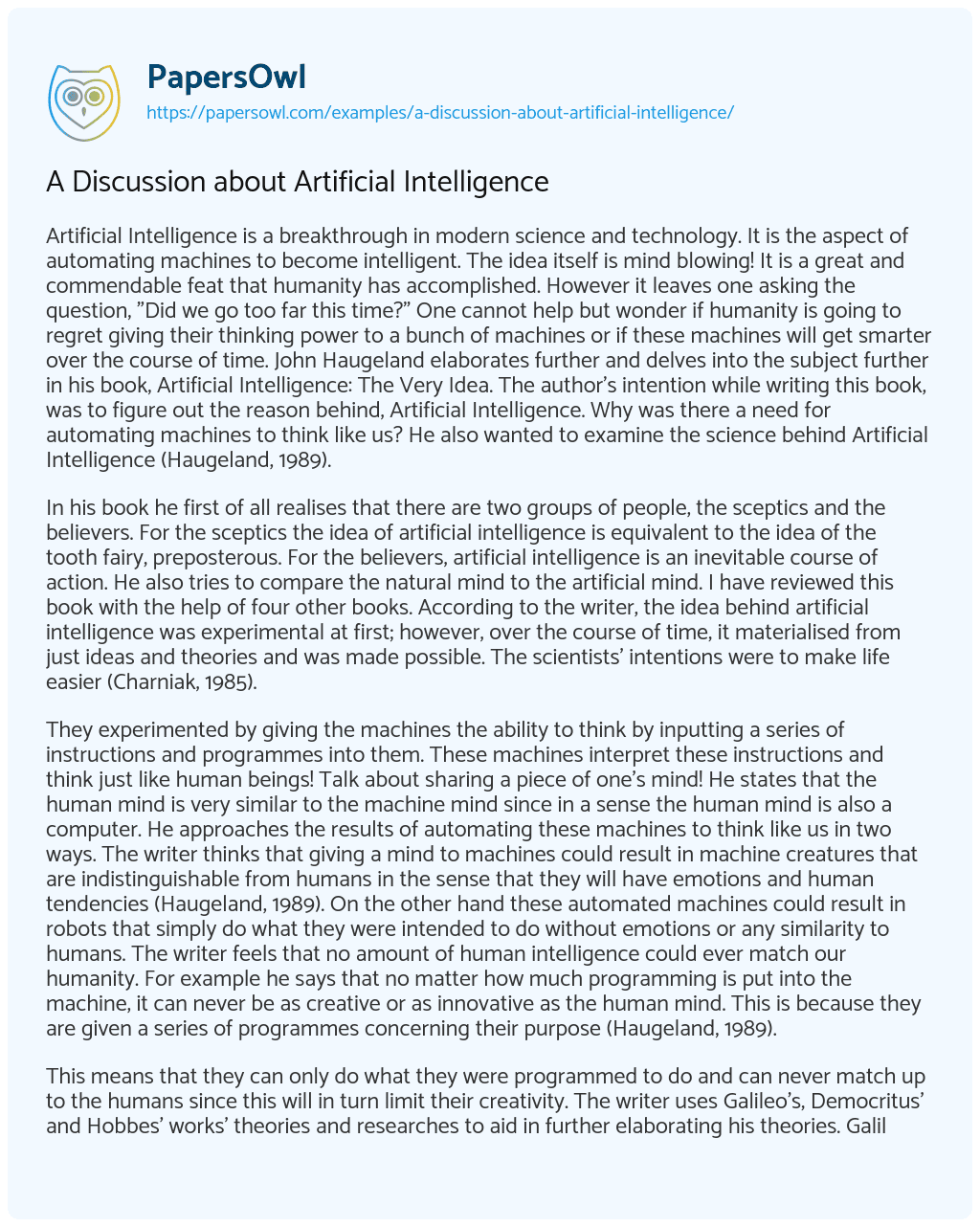 They experimented by giving the machines the ability to think by inputting a series of instructions and programmes into them. These machines interpret these instructions and think just like human beings! Talk about sharing a piece of one’s mind! He states that the human mind is very similar to the machine mind since in a sense the human mind is also a computer. He approaches the results of automating these machines to think like us in two ways. The writer thinks that giving a mind to machines could result in machine creatures that are indistinguishable from humans in the sense that they will have emotions and human tendencies (Haugeland, 1989). On the other hand these automated machines could result in robots that simply do what they were intended to do without emotions or any similarity to humans. The writer feels that no amount of human intelligence could ever match our humanity. For example he says that no matter how much programming is put into the machine, it can never be as creative or as innovative as the human mind. This is because they are given a series of programmes concerning their purpose (Haugeland, 1989).

This means that they can only do what they were programmed to do and can never match up to the humans since this will in turn limit their creativity. The writer uses Galileo’s, Democritus’ and Hobbes’ works’ theories and researches to aid in further elaborating his theories. Galileo did not focus on the mind and the soul but mathematical representations (Haugeland, 1989). His mathematical representations gave way and breakthrough in matters concerning the mind. Democritus, a Greek atomist also ideally believed that nature is written in mathematical characters. Taking these into consideration and comparing them to the matter at hand, artificial intelligence, one realises that it requires mathematics, which means that they might just as well be nature’s creations. However if this is the case it means that they have a higher capability of being smarter than human beings since everything about them is based on mathematical programs that are technically the basis of the human minds(Haugeland, 1989).

These machines could constantly reupdate themselves based on mathematical calculations unlike the human mind. In this book, Haugeland mentions Thomas Hobbes as the father of artificial intelligence as early as the 1650s. Hobbes researches and findings were that the human mind basically makes use of numeric operations just like calculating using a pen and a paper, but it happens internally (Haugeland, 1989). He also claims that the human mind performs at its prime when it follows a systematic order or sequence. This means that human beings and these machines are more alike than one could have imagined. This similarity as it implies that just like people, these machines will eventually figure out if they stick to their programmes! When he puts it that way, Haugeland makes one wonder will these machines that now have intelligence one day take over the world? They were given an inch; will their aim be how to get a mile? Did scientists create the end of humanity’s purpose? For example, at the basic steps, the machines were first created to perform a particular function, and let’s not forget that their minds are essentially human (Russel & Norveg, 2016).

This means that while performing their basic functions, they are constantly mastering these functions and coming up with better ways to do those functions with the aid of mathematical calculations engrained in their systems. Eventually they will become better than humans at those tasks. This would be a good thing if the risk of them developing an uncontrollable mind of their own was not there (Haugeland, 1989). These machines might eventually want to take credit for their work and revolt in case they do not get the credit. One should also consider the fact that these are machines basically, this means that they cannot get tired or sick or demand any payment; this means that more and more employers will be hiring machines in the future, the near future per say. This is a matter of debate. To some this would be a commendable feat as it would mean humans will no longer have to toil or work tirelessly for the rest of their lives as they would now have helpers that have been automated to assist them. However for most humans there is a sort of fulfilment associated with work. Most people would not figure out their purpose in life as research shows that majority of people’s identity is based on what they do (Dreyfus & Dreyfus, 1991).

However most peoples’ fear arises from theories such as these and even puts most people at the risk of depression since everyone wants a fulfilled life and part of being fulfilled is having a career or a job. In conclusion Artificial Intelligence: The Very Idea is an intriguing book that demands and locks the reader’s attention. John Haugeland intricately manoeuvres the topic of artificial intelligence. I will have to admit that in the 20th century, I could have been a sceptic. The idea of a machine with a human mindcould has simply been ludicrous. However I am living in the 21st century and like the rest of the Millennials I have seen very advanced gadgets, like smart phones and smart televisions, and coupled with detailed facts from this book, how could I not be a believer? This also opened my eyes to the potent risks that might arise from the success and the advancement of these machines. To add on to that considering the far artificial intelligence has come since the time the book was written, who would not be? The writer only considered life sized machines whereas gadgets such as phones and televisions are now artificially intelligent. They might eventually get better than people since in essence they hail from nature and will therefore adapt overtime, just like the rest of nature does. This will in turn result in them replacing human beings at jobs. John tries to keep an unbiased approach to this topic, however by merely stating facts; the idea of artificially intelligent machines becomes scarier. This could however be blamed on the aspect of people fearing what they cannot understand. Depending on what you are, a believer or a sceptic, this book will affect everyone differently. Overall it is an enlightening and intriguing book.

A Discussion about Artificial Intelligence. (2019, Jul 26). Retrieved from https://papersowl.com/examples/a-discussion-about-artificial-intelligence/