Andrew Jackson – was a Good President 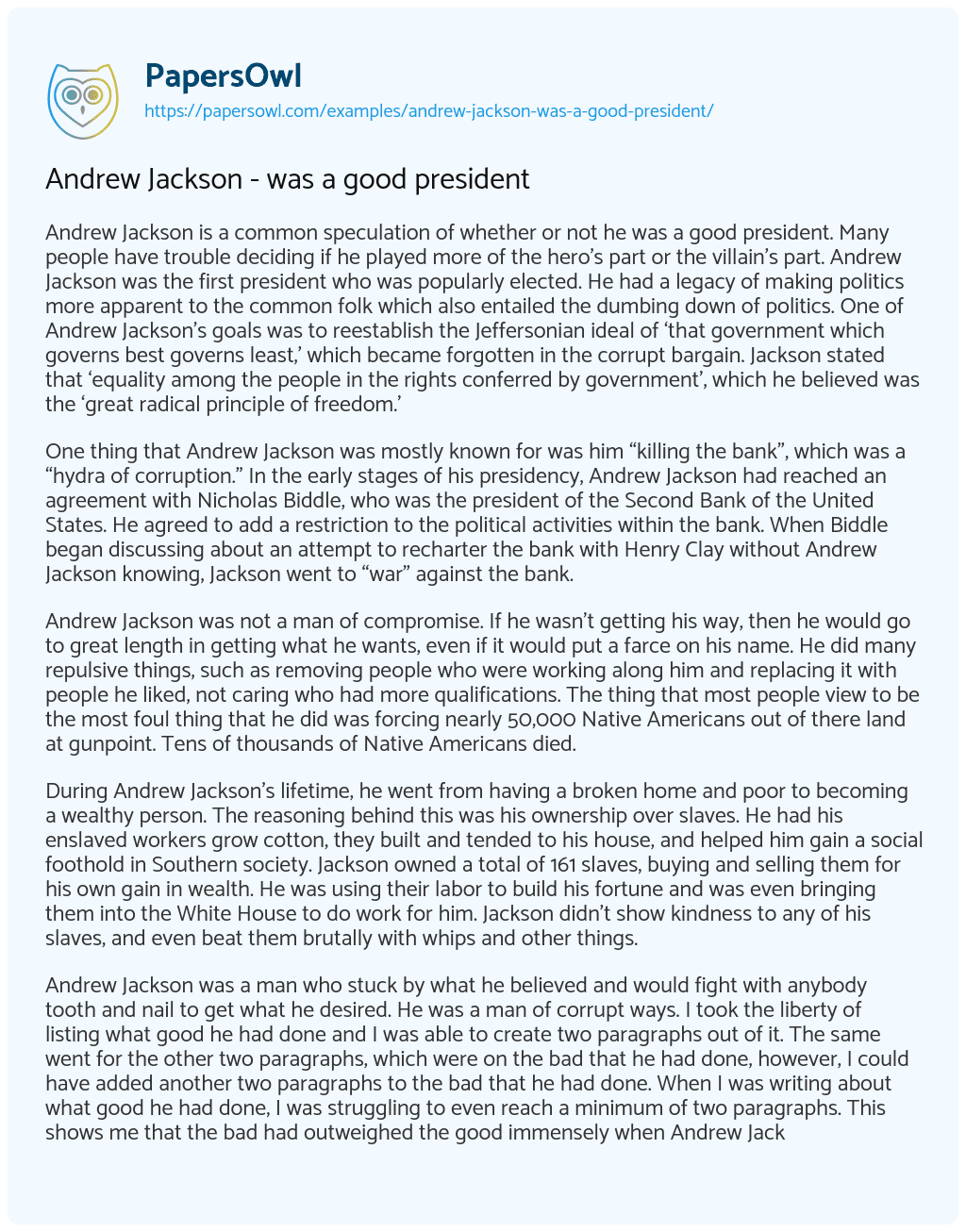 Andrew Jackson is a common speculation of whether or not he was a good president. Many people have trouble deciding if he played more of the hero’s part or the villain’s part. Andrew Jackson was the first president who was popularly elected. He had a legacy of making politics more apparent to the common folk which also entailed the dumbing down of politics. One of Andrew Jackson’s goals was to reestablish the Jeffersonian ideal of ‘that government which governs best governs least,’ which became forgotten in the corrupt bargain. Jackson stated that ‘equality among the people in the rights conferred by government’, which he believed was the ‘great radical principle of freedom.’

One thing that Andrew Jackson was mostly known for was him “killing the bank”, which was a “hydra of corruption.” In the early stages of his presidency, Andrew Jackson had reached an agreement with Nicholas Biddle, who was the president of the Second Bank of the United States. He agreed to add a restriction to the political activities within the bank. When Biddle began discussing about an attempt to recharter the bank with Henry Clay without Andrew Jackson knowing, Jackson went to “war” against the bank.

Andrew Jackson was not a man of compromise. If he wasn’t getting his way, then he would go to great length in getting what he wants, even if it would put a farce on his name. He did many repulsive things, such as removing people who were working along him and replacing it with people he liked, not caring who had more qualifications. The thing that most people view to be the most foul thing that he did was forcing nearly 50,000 Native Americans out of there land at gunpoint. Tens of thousands of Native Americans died.

During Andrew Jackson’s lifetime, he went from having a broken home and poor to becoming a wealthy person. The reasoning behind this was his ownership over slaves. He had his enslaved workers grow cotton, they built and tended to his house, and helped him gain a social foothold in Southern society. Jackson owned a total of 161 slaves, buying and selling them for his own gain in wealth. He was using their labor to build his fortune and was even bringing them into the White House to do work for him. Jackson didn’t show kindness to any of his slaves, and even beat them brutally with whips and other things.

Andrew Jackson - was a good president. (2019, Jul 02). Retrieved from https://papersowl.com/examples/andrew-jackson-was-a-good-president/

Was President Andrew Jackson a Supervillain

Andrew Jackson and other President