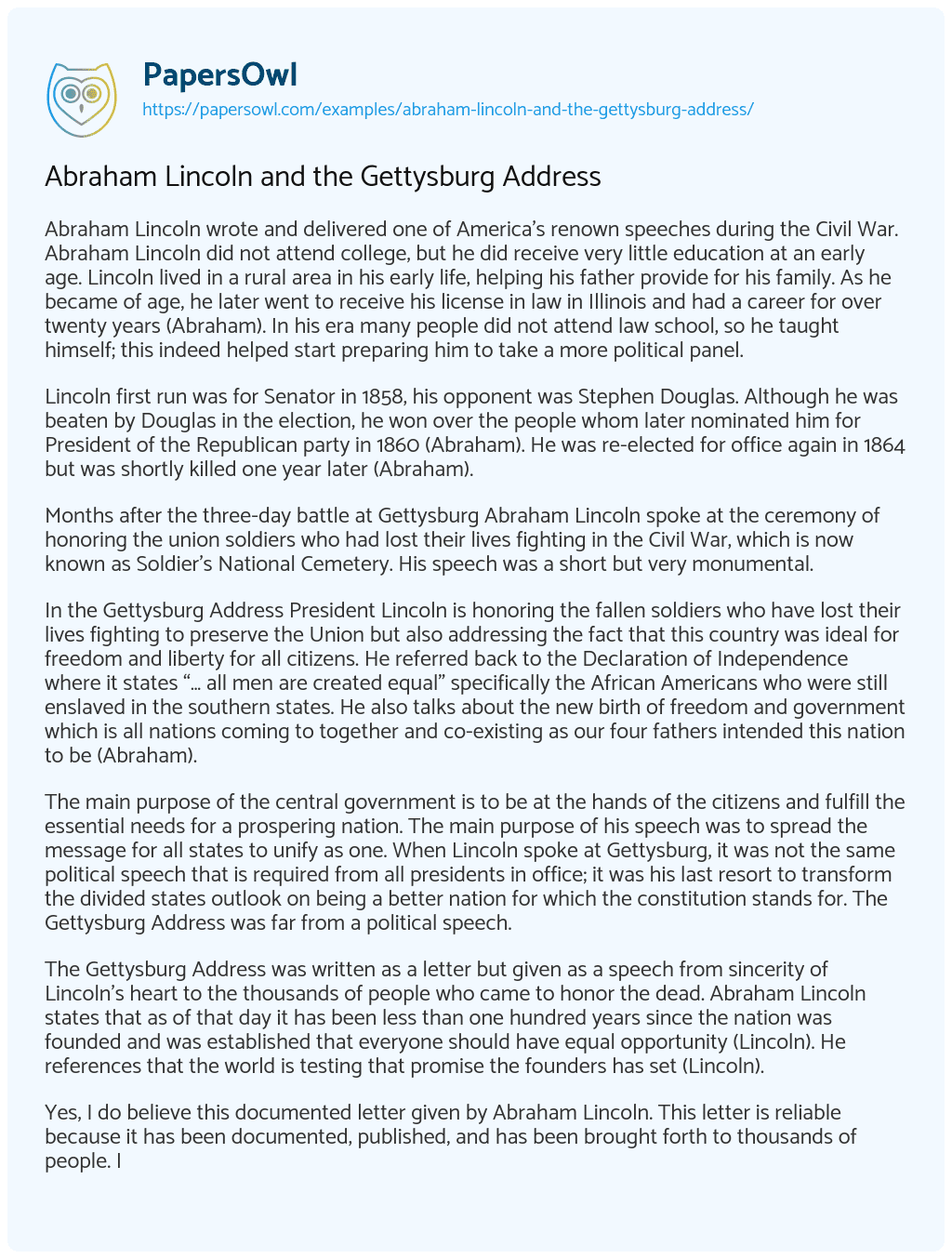 Abraham Lincoln wrote and delivered one of America’s renown speeches during the Civil War. Abraham Lincoln did not attend college, but he did receive very little education at an early age. Lincoln lived in a rural area in his early life, helping his father provide for his family. As he became of age, he later went to receive his license in law in Illinois and had a career for over twenty years (Abraham). In his era many people did not attend law school, so he taught himself; this indeed helped start preparing him to take a more political panel.

Lincoln first run was for Senator in 1858, his opponent was Stephen Douglas. Although he was beaten by Douglas in the election, he won over the people whom later nominated him for President of the Republican party in 1860 (Abraham). He was re-elected for office again in 1864 but was shortly killed one year later (Abraham).

Months after the three-day battle at Gettysburg Abraham Lincoln spoke at the ceremony of honoring the union soldiers who had lost their lives fighting in the Civil War, which is now known as Soldier’s National Cemetery. His speech was a short but very monumental.

In the Gettysburg Address President Lincoln is honoring the fallen soldiers who have lost their lives fighting to preserve the Union but also addressing the fact that this country was ideal for freedom and liberty for all citizens. He referred back to the Declaration of Independence where it states “… all men are created equal” specifically the African Americans who were still enslaved in the southern states. He also talks about the new birth of freedom and government which is all nations coming to together and co-existing as our four fathers intended this nation to be (Abraham).

The main purpose of the central government is to be at the hands of the citizens and fulfill the essential needs for a prospering nation. The main purpose of his speech was to spread the message for all states to unify as one. When Lincoln spoke at Gettysburg, it was not the same political speech that is required from all presidents in office; it was his last resort to transform the divided states outlook on being a better nation for which the constitution stands for. The Gettysburg Address was far from a political speech.

The Gettysburg Address was written as a letter but given as a speech from sincerity of Lincoln’s heart to the thousands of people who came to honor the dead. Abraham Lincoln states that as of that day it has been less than one hundred years since the nation was founded and was established that everyone should have equal opportunity (Lincoln). He references that the world is testing that promise the founders has set (Lincoln).

Yes, I do believe this documented letter given by Abraham Lincoln. This letter is reliable because it has been documented, published, and has been brought forth to thousands of people. It is reliable in the since of reaching the minds of the people who were oppose to the acts of the war between the states. To this day, the last draft of the speech is place in the White House’s collection (Small).

It is embedded in his speech that he did not want people to forget what the main issue of the Civil War. It is also a reflection on the person who composed this document, the people saw that Abraham Lincoln as a man who believed he can transform the nation and with the powerful speech he gave at Gettysburg started the movement. He later went to pass the Emancipation Proclamation on January 1, 1863 that proclaimed all slaves held with the rebellion states shall be free (Lincoln). Even though it did not free all slaves, it was the first step for Lincoln to achieving his goal.

Edward Everett wrote to Lincoln “I could flatter myself, that I came as near to the central idea of the occasion … “(Everett). Abraham Lincoln was not the primary speaker of the ceremony it was Edward Everett, Lincoln was only asked to give special remarks of comfort; yet his brief speech is the most remembered of that day. It has marked a pivotal movement in American history during the Civil War. His speech particularly shed light on what life was like in that time.

This speech influences me by Abraham Lincoln making it his top priority to rebuild and reunite northern and southern states. I am inspired by his dedication of keeping the topic of why the Civil War was initially about. Abraham Lincoln fought for the opportunity for all states to have the rights to delegate rights for people not just one person.

One interesting aspect of Abraham Lincoln speech was his approach to the people. He did not personally attack the Confederate soldiers who fought in the war, but he particularly addresses the solutions. I picked this topic because I feel that the Civil War could have been be a life changing event. It makes me think of all the possible outcomes of life if the Union did not win the war. Abraham Lincoln will always as a heroic figure in American history.

Abraham Lincoln and the Gettysburg Address. (2021, Apr 20). Retrieved from https://papersowl.com/examples/abraham-lincoln-and-the-gettysburg-address/

The Significance of the Gettysburg Address

Abraham Lincoln the Greatest Leaders of our Nation

Speeches “The Gettysburg Address” and “I have a Dream”