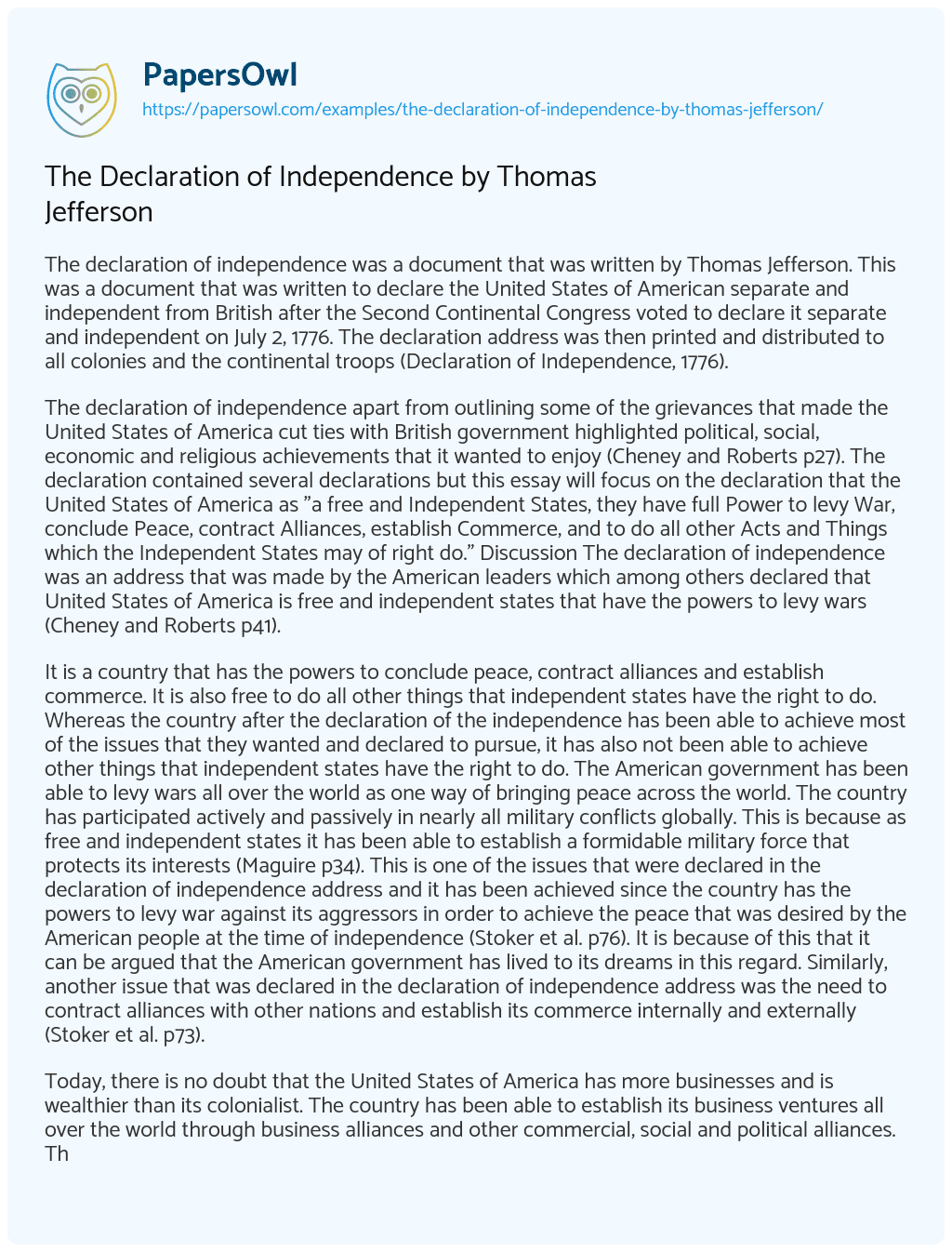 The declaration of independence was a document that was written by Thomas Jefferson. This was a document that was written to declare the United States of American separate and independent from British after the Second Continental Congress voted to declare it separate and independent on July 2, 1776. The declaration address was then printed and distributed to all colonies and the continental troops (Declaration of Independence, 1776).

It is a country that has the powers to conclude peace, contract alliances and establish commerce. It is also free to do all other things that independent states have the right to do. Whereas the country after the declaration of the independence has been able to achieve most of the issues that they wanted and declared to pursue, it has also not been able to achieve other things that independent states have the right to do. The American government has been able to levy wars all over the world as one way of bringing peace across the world. The country has participated actively and passively in nearly all military conflicts globally. This is because as free and independent states it has been able to establish a formidable military force that protects its interests (Maguire p34). This is one of the issues that were declared in the declaration of independence address and it has been achieved since the country has the powers to levy war against its aggressors in order to achieve the peace that was desired by the American people at the time of independence (Stoker et al. p76). It is because of this that it can be argued that the American government has lived to its dreams in this regard. Similarly, another issue that was declared in the declaration of independence address was the need to contract alliances with other nations and establish its commerce internally and externally (Stoker et al. p73).

Today, there is no doubt that the United States of America has more businesses and is wealthier than its colonialist. The country has been able to establish its business ventures all over the world through business alliances and other commercial, social and political alliances. The country has been able to establish businesses even in the United Kingdom which was its colonialist (Maguire p24). As a country that was eager to expand its economy, United States of America has with time developed its economy to become the leading economy globally something that formed its dream during the declaration of independence. The last part of this declarative statement was that the United States as free and independent states declared that it wanted powers to do acts and other things that independent and free states have the right to do (Stoker et al. p76).

As much as it has as a government done many things to enhance the living standards of its people in a political, economic and social perspective, the American government has not achieved much in this regard. Other things that free and independent states do to its people is to ensure that there is the protection of human rights, liberty, there is equality in political, social and economic spheres. This has not been the case in the United States. There is a high level of inequality in education and judiciary yet one of the grievances in the declaration of independence was “For depriving us in many cases, of the benefits of Trial by Jury,” (Declaration of Independence, 1776).

Most of the Americans are not able to access high-quality education and political participation and involvement by the minority groups is something that still appears to be a struggle yet this is the other things that the government wanted to do to its people (Cheney and Roberts p21). There is a need that much efforts are concentrated on this issue that the government wanted to achieve so that it can be declared that the United States of America is living to its dreams that it wanted to achieve during the declaration of independence.

The declaration of independence was an address that was authored by Thomas Jefferson which declared United States of America a free and independent States. The declaration highlighted some of the grievances that made it resist the British rule and also declared some of the achievements that it wanted to achieve as a free and independent state. Today, the United States has the power to levy wars to achieve or conclude peace. The government has achieved immensely information about alliances and establishing commerce and has achieved immensely in political, social and economic spheres. However, it has achieved little in ensuring that its people are treated equally in education, economy and in other social issues. It is because of this that the government must up its efforts to achieve in these areas.

The Declaration of Independence by Thomas Jefferson. (2020, Mar 02). Retrieved from https://papersowl.com/examples/the-declaration-of-independence-by-thomas-jefferson/

Significance of Declaration of Independence