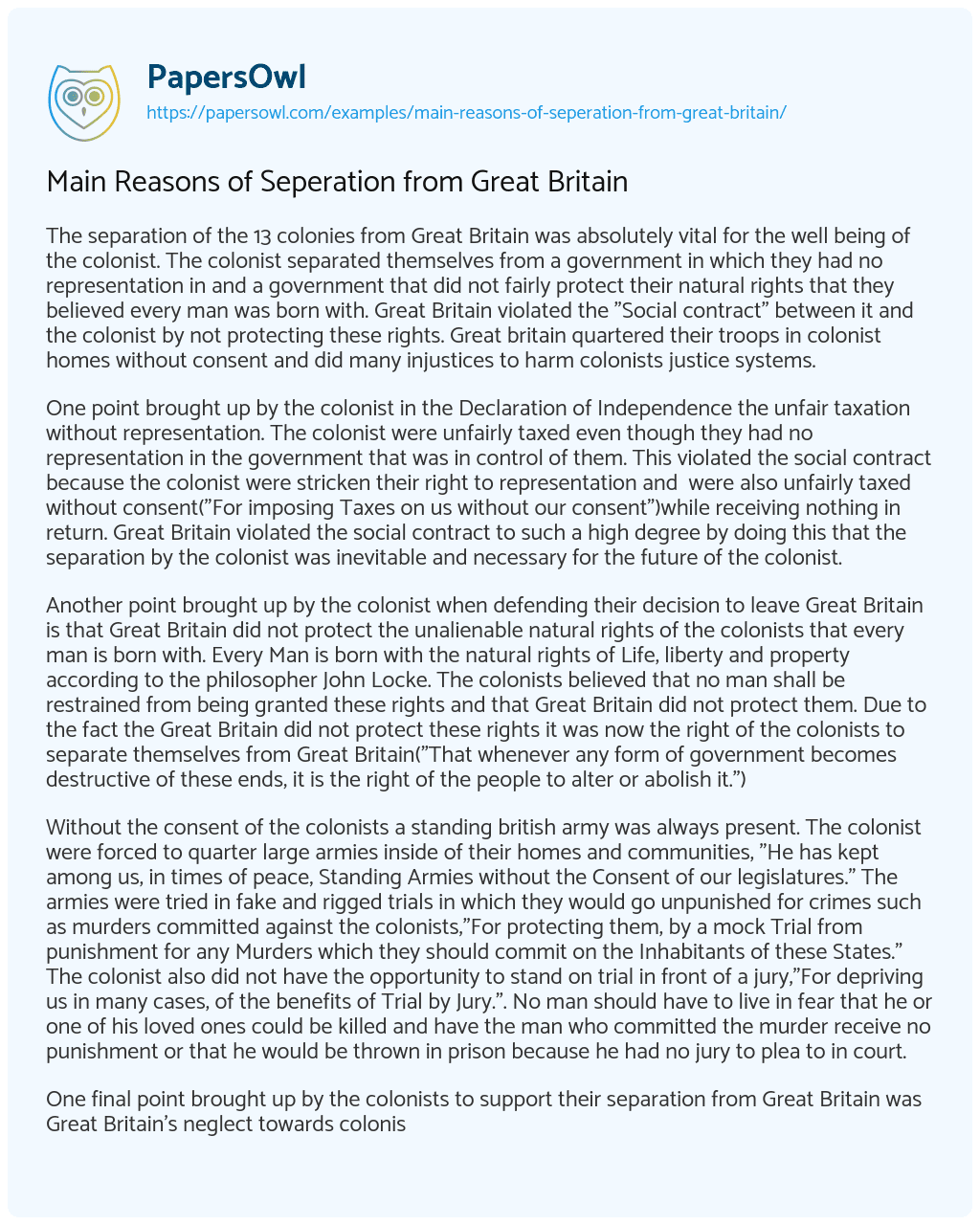 The separation of the 13 colonies from Great Britain was absolutely vital for the well being of the colonist. The colonist separated themselves from a government in which they had no representation in and a government that did not fairly protect their natural rights that they believed every man was born with. Great Britain violated the “Social contract” between it and the colonist by not protecting these rights. Great britain quartered their troops in colonist homes without consent and did many injustices to harm colonists justice systems.

Without the consent of the colonists a standing british army was always present. The colonist were forced to quarter large armies inside of their homes and communities, “He has kept among us, in times of peace, Standing Armies without the Consent of our legislatures.” The armies were tried in fake and rigged trials in which they would go unpunished for crimes such as murders committed against the colonists,”For protecting them, by a mock Trial from punishment for any Murders which they should commit on the Inhabitants of these States.” The colonist also did not have the opportunity to stand on trial in front of a jury,”For depriving us in many cases, of the benefits of Trial by Jury.”. No man should have to live in fear that he or one of his loved ones could be killed and have the man who committed the murder receive no punishment or that he would be thrown in prison because he had no jury to plea to in court.

One final point brought up by the colonists to support their separation from Great Britain was Great Britain’s neglect towards colonists’ laws and lawmakers. King George III “refused his Assent to Laws, the most wholesome and necessary for the public good.” making the progress of justice impossible in the colonies. He has “forbidden his Governors to pass Laws of immediate and pressing importance.” allowing injustices to continue. He has, “called together legislative bodies at places unusual, uncomfortable, and distant from the depository of their Public Records, for the sole purpose of fatiguing them into compliance with his measures.” making talks of changing the unfair and unjust justice system of the colonies a very difficult thing to do.

A War of the Thirteen Colonies against Great Britain

Many Reasons for the American Revolution

A Loyalists View of the Declaration of Independence