Articles of Confederation and the Constitution 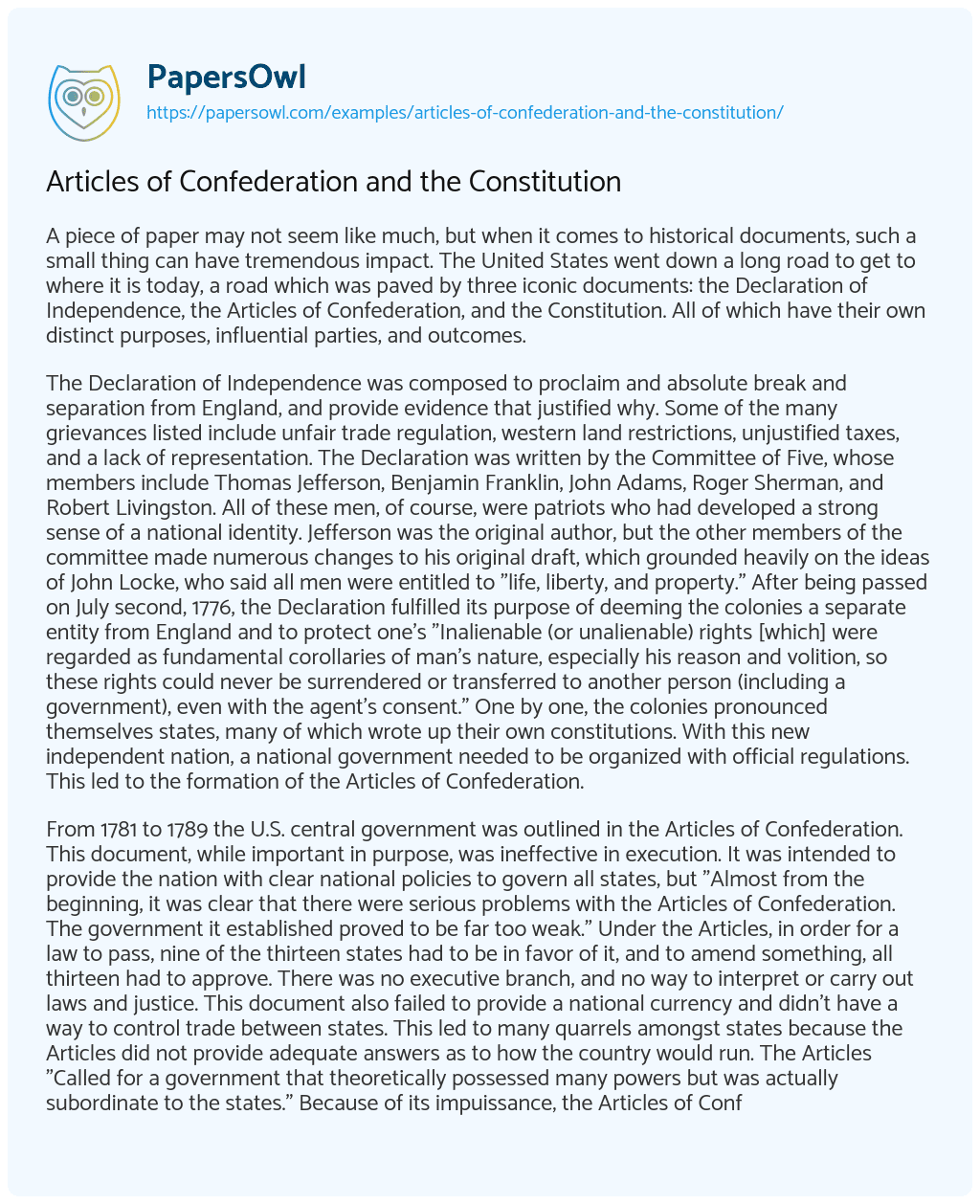 A piece of paper may not seem like much, but when it comes to historical documents, such a small thing can have tremendous impact. The United States went down a long road to get to where it is today, a road which was paved by three iconic documents: the Declaration of Independence, the Articles of Confederation, and the Constitution. All of which have their own distinct purposes, influential parties, and outcomes.

The Declaration of Independence was composed to proclaim and absolute break and separation from England, and provide evidence that justified why. Some of the many grievances listed include unfair trade regulation, western land restrictions, unjustified taxes, and a lack of representation. The Declaration was written by the Committee of Five, whose members include Thomas Jefferson, Benjamin Franklin, John Adams, Roger Sherman, and Robert Livingston. All of these men, of course, were patriots who had developed a strong sense of a national identity. Jefferson was the original author, but the other members of the committee made numerous changes to his original draft, which grounded heavily on the ideas of John Locke, who said all men were entitled to “life, liberty, and property.” After being passed on July second, 1776, the Declaration fulfilled its purpose of deeming the colonies a separate entity from England and to protect one’s “Inalienable (or unalienable) rights [which] were regarded as fundamental corollaries of man’s nature, especially his reason and volition, so these rights could never be surrendered or transferred to another person (including a government), even with the agent’s consent.” One by one, the colonies pronounced themselves states, many of which wrote up their own constitutions. With this new independent nation, a national government needed to be organized with official regulations. This led to the formation of the Articles of Confederation.

From 1781 to 1789 the U.S. central government was outlined in the Articles of Confederation. This document, while important in purpose, was ineffective in execution. It was intended to provide the nation with clear national policies to govern all states, but “Almost from the beginning, it was clear that there were serious problems with the Articles of Confederation. The government it established proved to be far too weak.” Under the Articles, in order for a law to pass, nine of the thirteen states had to be in favor of it, and to amend something, all thirteen had to approve. There was no executive branch, and no way to interpret or carry out laws and justice. This document also failed to provide a national currency and didn’t have a way to control trade between states. This led to many quarrels amongst states because the Articles did not provide adequate answers as to how the country would run. The Articles “Called for a government that theoretically possessed many powers but was actually subordinate to the states.” Because of its impuissance, the Articles of Confederation was replaced by the Constitution in 1787.

The Constitution of the United States was meant to provide for a national government in a stronger, more concise way than the Articles of Confederation did. “In addition to solving the question of sovereignty, the Constitution produced a distinctive solution to the problem of concentrated authority.”  One man of importance when referring to the Constitution is James Madison. One key idea he instilled into the new government was that the power comes from the people, an idea which stemmed from a French philosopher named Baron de Montesquieu.”The Constitution became the supreme law of the United States.” This document creates a federal court system, a system of checks and balances, a bicameral legislature, a strong executive branch, and a system to regulate trade. While it did indeed form a strong central government, the Constitution also ensured the government did not get too strong to ensure that the people always had the power.

The Declaration of Independence, the Articles of Confederation, and the Constitution all played significant roles in forming the modern United States of America. They all contained the common idea that the people come first.The Declaration pronounced a nation, and the Articles and the Constitution were both meant to create a national government for this new country, but the Constitution’s policies were much more elaborate than those of the Articles. Both, however, did have the intention of limiting the government’s power, but the Articles limited it too much. Unlike the other two, the Declaration had a tremendous impact outside of the United States because it showed other countries that England could be beat, and that no outside nation could rule the colonies; whereas the others were simply intended for the United States government. All of these documents were important, but the one that has the most impact in America’s current proceedings is the Constitution, as it still serves as the country’s outline for government.

Articles of Confederation and the Constitution. (2019, Mar 09). Retrieved from https://papersowl.com/examples/articles-of-confederation-and-the-constitution/

Articles of Confederation as a Rough Draft to the Constitution

Constitution Vs Articles of Confederation