Significance of Declaration of Independence 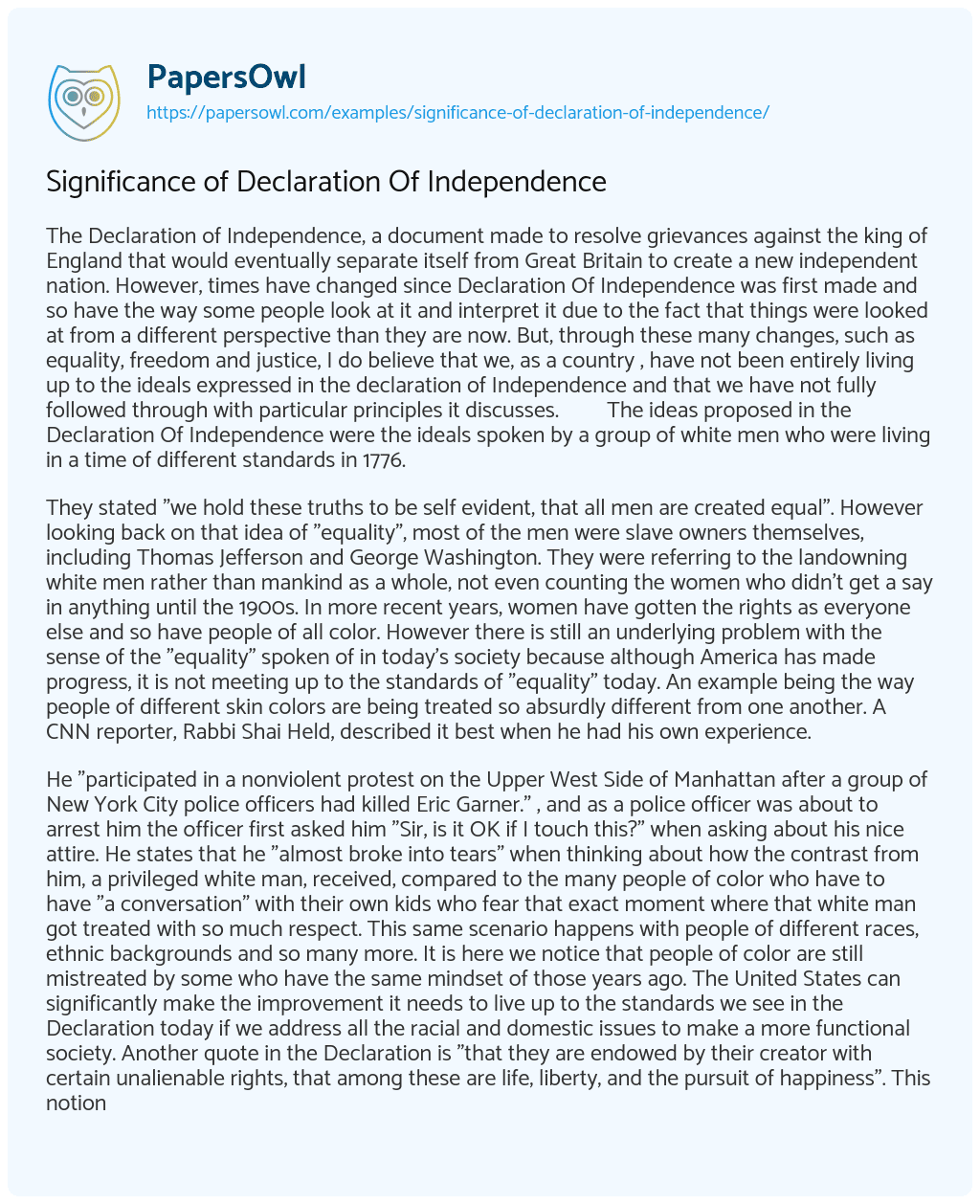 The Declaration of Independence, a document made to resolve grievances against the king of England that would eventually separate itself from Great Britain to create a new independent nation. However, times have changed since Declaration Of Independence was first made and so have the way some people look at it and interpret it due to the fact that things were looked at from a different perspective than they are now. But, through these many changes, such as equality, freedom and justice, I do believe that we, as a country , have not been entirely living up to the ideals expressed in the declaration of Independence and that we have not fully followed through with particular principles it discusses.         The ideas proposed in the Declaration Of Independence were the ideals spoken by a group of white men who were living in a time of different standards in 1776.

They stated “we hold these truths to be self evident, that all men are created equal”. However looking back on that idea of “equality”, most of the men were slave owners themselves, including Thomas Jefferson and George Washington. They were referring to the landowning white men rather than mankind as a whole, not even counting the women who didn’t get a say in anything until the 1900s. In more recent years, women have gotten the rights as everyone else and so have people of all color. However there is still an underlying problem with the sense of the “equality” spoken of in today’s society because although America has made progress, it is not meeting up to the standards of “equality” today. An example being the way people of different skin colors are being treated so absurdly different from one another. A CNN reporter, Rabbi Shai Held, described it best when he had his own experience.

He “participated in a nonviolent protest on the Upper West Side of Manhattan after a group of New York City police officers had killed Eric Garner.” , and as a police officer was about to arrest him the officer first asked him “Sir, is it OK if I touch this?” when asking about his nice attire. He states that he “almost broke into tears” when thinking about how the contrast from him, a privileged white man, received, compared to the many people of color who have to have “a conversation” with their own kids who fear that exact moment where that white man got treated with so much respect. This same scenario happens with people of different races, ethnic backgrounds and so many more. It is here we notice that people of color are still mistreated by some who have the same mindset of those years ago. The United States can significantly make the improvement it needs to live up to the standards we see in the Declaration today if we address all the racial and domestic issues to make a more functional society. Another quote in the Declaration is “that they are endowed by their creator with certain unalienable rights, that among these are life, liberty, and the pursuit of happiness”. This notion of freedom or “liberty” did not extend to all people. Personal rights were and still are inhibited for many american people. People of color and women were not included in many situations, such as elections and a general equal rights as many did have.

Although we have made progress in letting everyone of color and females have the same rights as males, we as a society we have stumbled upon the issue of letting religious backgrounds and ethnic minorities, gay, transgender, and many more have the same rights that most people do have. Many of these specific groups are oppressed and restricted in many ways from pursuing what makes them equal and happy. Yes we have overcome the problems that some faced years ago but now we have to arise and overcome these new sets of challenges that we see blocking the way of the specific quote from the declaration to be true. In today’s world poverty, foreclosure, hunger and unemployment are not signs of “liberty” either, people are continuously being held back and having the sense of freedom restricted. There is no freedom in these aspects, so they do not live up to the standards of todays for it to be true. There is even an obvious lack of freedom regarding basic education that one needs to thrive in society today.

A study shows that in a period of time where “when median family income rose by 147%, college tuition and fees rose 439%”. Right there is tripping the cost of education and putting more of a financial struggle on lower income communities. Here, there is no ounce of “liberty” as we would expect there to be. There is only a benefit for the wealthy. Along with the idea of ” “that they are endowed by their creator with certain unalienable rights, that among these are life, liberty, and the pursuit of happiness”. Every year we see the American Justice system take hard hits. As Alternet.org says, “the American system of justice means injustice for too many”, meaning that some people receive little or no punishment for very horrible offenses, while others receive harsh or faulty punishment for much less. In news today we have seen cases of false charges that left people behind bars for years, we’ve seen rapists get released free of charge, and many racists arrests where in many cases, someone did nothing yet still ended up behind bars.

With this alone we see fault in the system. In a world where the thought of “justice” is followed through with, these cases would not happen and people would get rightfully charged and accused on the correct terms. Looking back on all of this traces back to the ideals of equality, freedom and justice that were originally written in the Declaration Of Independence. The ideals that we, as a society, have not mastered or overcome. Even though how we interpret the declaration of independence is different from the men that originally made it, it all means a similar thing just on a larger spectrum. Yes we have technically lived up to the ideas listed in earlier terms, but in today’s world it’s only just the beginning of the changes that we need to make. Despite the multiple attempts, America still has not accomplished the goal of today’s interpretation of the declaration of independence. However, the United States has come far, it still has a long way to go in terms of accomplishing and fulfilling this goal. But if the people and the government work united, I have no doubt that these ideals will be accomplished.

Significance of Declaration Of Independence. (2019, Nov 27). Retrieved from https://papersowl.com/examples/significance-of-declaration-of-independence/