The Declaration of Independence: a History Moment 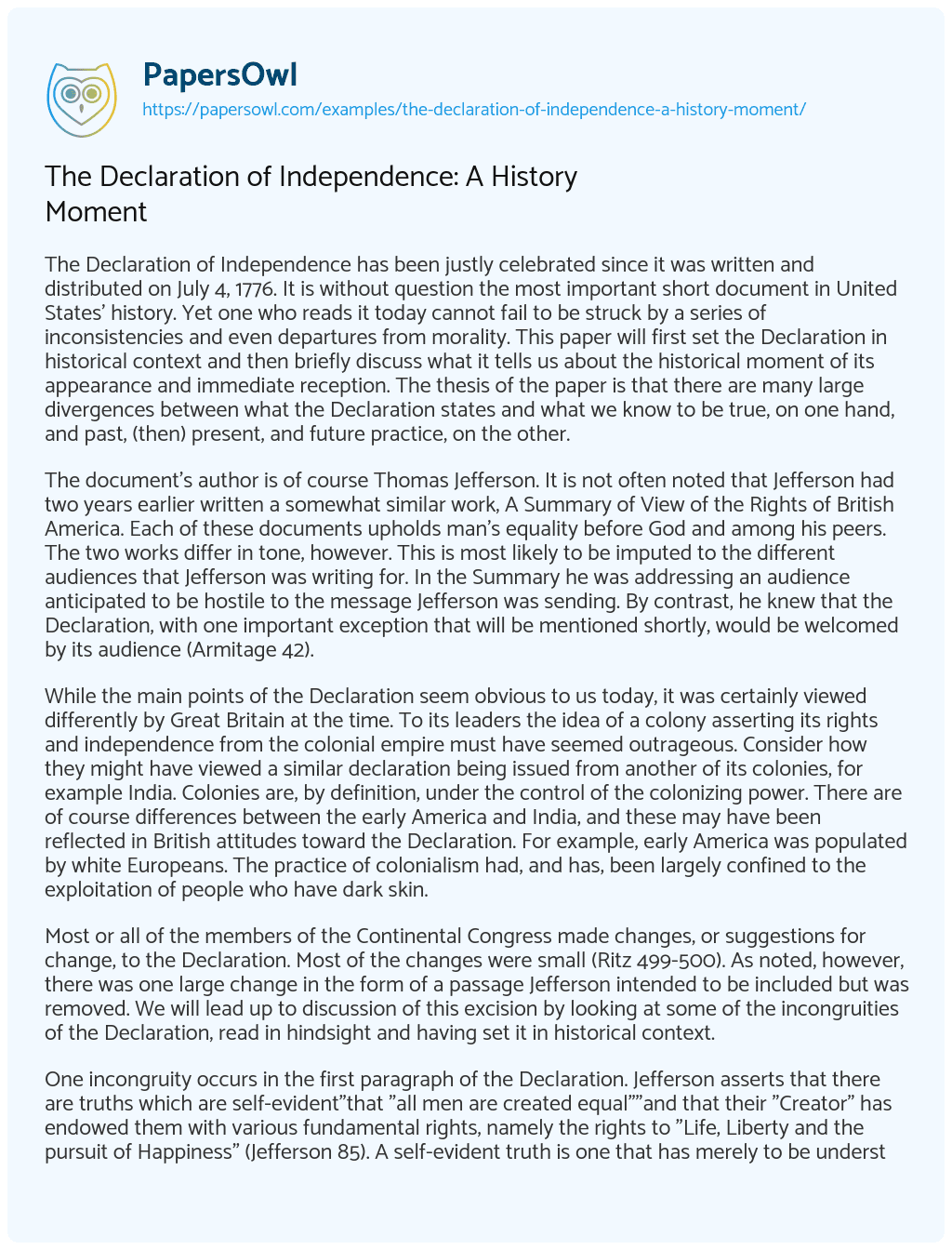 The Declaration of Independence has been justly celebrated since it was written and distributed on July 4, 1776. It is without question the most important short document in United States’ history. Yet one who reads it today cannot fail to be struck by a series of inconsistencies and even departures from morality. This paper will first set the Declaration in historical context and then briefly discuss what it tells us about the historical moment of its appearance and immediate reception. The thesis of the paper is that there are many large divergences between what the Declaration states and what we know to be true, on one hand, and past, (then) present, and future practice, on the other.

The document’s author is of course Thomas Jefferson. It is not often noted that Jefferson had two years earlier written a somewhat similar work, A Summary of View of the Rights of British America. Each of these documents upholds man’s equality before God and among his peers. The two works differ in tone, however. This is most likely to be imputed to the different audiences that Jefferson was writing for. In the Summary he was addressing an audience anticipated to be hostile to the message Jefferson was sending. By contrast, he knew that the Declaration, with one important exception that will be mentioned shortly, would be welcomed by its audience (Armitage 42).

While the main points of the Declaration seem obvious to us today, it was certainly viewed differently by Great Britain at the time. To its leaders the idea of a colony asserting its rights and independence from the colonial empire must have seemed outrageous. Consider how they might have viewed a similar declaration being issued from another of its colonies, for example India. Colonies are, by definition, under the control of the colonizing power. There are of course differences between the early America and India, and these may have been reflected in British attitudes toward the Declaration. For example, early America was populated by white Europeans. The practice of colonialism had, and has, been largely confined to the exploitation of people who have dark skin.

Most or all of the members of the Continental Congress made changes, or suggestions for change, to the Declaration. Most of the changes were small (Ritz 499-500). As noted, however, there was one large change in the form of a passage Jefferson intended to be included but was removed. We will lead up to discussion of this excision by looking at some of the incongruities of the Declaration, read in hindsight and having set it in historical context.

One incongruity occurs in the first paragraph of the Declaration. Jefferson asserts that there are truths which are self-evident”that “all men are created equal””and that their “Creator” has endowed them with various fundamental rights, namely the rights to “Life, Liberty and the pursuit of Happiness” (Jefferson 85). A self-evident truth is one that has merely to be understood in order to know it to be true. Such a truth needs no additional justification. Yet Jefferson appeals to the “Creator” to ground his assertions as well. This is a minor point, namely that if Jefferson’s assertions were self-evident then there would be no need to appeal to God to justify them. Here we have an example of the tension, evident in the Declaration, between a traditional theological framework and the contrasting Enlightenment insistence on the primacy of reason and evidence.

More important problems concern Jefferson’s claim that “all men” have the rights in question, irrespective of whether they are conferred by reason and understanding, on one hand, and Providence, on the other. There are several things to say about this. First, Jefferson was not using the term “men” in the way that it is sometimes used today, to refer to people in general. It was understood that, as Howard Zinn points out, “use of the phrase ‘all men are created equal’ was probably not a deliberate attempt to make a statement about women” (73). Women were simply invisible when it came to politics. Jefferson would arguably not have even considered the question whether women are included among those whose rights he characterizes.

Also excluded, of course, were Blacks and Native Americans. Of the latter, Jefferson writes that among Britain’s transgressions against the 13 states was its exciting “domestic insurrections amongst us, and has endeavored to bring on the inhabitants of our frontiers, the merciless Indian Savages, whose known rule of warfare, is an undistinguished destruction of all ages, sexes, and conditions” (87). Jefferson refers here to the British policy of using American Indians as a kind of check on early America’s aspirations toward independence. The point of quoting the passage is not the absurdity (though it is absurd) of calling Native Americans, who had been slaughtered by the European colonists; or the fact that the Europeans had no right to the land that they simply claimed. Instead, the point is that the passage is clearly incompatible with Jefferson’s earlier insistence that all men have the rights mentioned above.

Blacks too were clearly meant to be excluded in the same way. In fact, the passage that was ultimately excised from the Declaration dealt with this issue. Jefferson had, in the passage, accused the King of “transporting slaves from Africa to the colonies and ‘suppressing every legislative attempt to prohibit or to restrain this execrable commerce” (Zinn 72). While Jefferson was, in theory, opposed to the practice of slavery, he himself owned hundreds of slaves up until the day that he died. It is, therefore, difficult to understand why he had written the passage in the first place, but easy to understand why it was ultimately decided that the passage must be struck from the Declaration. It seems likely that he was simply listing all the alleged Royal transgressions he could think of. The members of the Continental Congress insisted that the passage be removed, since they recognized the obvious point that its principle contradicted early American practice and probable future plans. As Zinn notes, “even that gesture toward the black slave was omitted in the great manifesto of freedom of the American Revolution” (72).

Interesting, too, is Jefferson’s assertion that “Governments are instituted among Men, deriving their just powers from the consent of the governed” (85-86). This is curious for a couple of reasons. One is that it applies, if at all, only to democratic governments. And Jefferson must surely have recognized that, prior to the time at which the Declaration was written, such governments were very much the exception rather than the rule. Another point of interest is that it is simply a factually incorrect assertion about any existing government of the time. Jefferson could object that he is not intending to make a factual statement but rather a normative one. His purpose, on this reading, was to point out what ought to be the case, rather than what is the case. The problem with this is that the British would certainly have disagreed on the matter. Therefore, for Jefferson to make this normative assumption amounted to begging the question in his dialectic against the crown.

A final point concerning the Declaration concerns Jefferson’s complain that Great Britain was “quartering” large numbers of military forces in North America. This is odd simply because such a practice was ubiquitous among the colonies, not only of Great Britain, but of most or all colonizers throughout history. This includes present day American practice, which is to invade and occupy countries such as Afghanistan and Iraq, as well as the policy of the U.S.’s client state of Israel, which has for half a century illegally occupied large portions of historical Palestine. The point here is not to pass judgment on any of this. It is simply to point out the clear contradiction between the claims of the Declaration, on one hand, and historical and contemporary fact, on the other.

In conclusion, this paper has briefly discussed this history of The Declaration of Independence as well as the historical moment in which it figured so prominently. It was pointed out that Jefferson, prior to writing the Declaration, had penned a similar document called A Summary of the Rights of British America. Some differences between the two were pointed out. The bulk of the paper was devoted to exploring some inconsistencies, contradictions, and discrepancies regarding the Declaration. This seemed appropriate, not only because they are so glaring and significant, but because of the nearly universal admiration for Jefferson’s short document. Many members of the Continental Congress made changes to the Declaration, all but one of which were relatively insignificant. The lone exception was the removal of a passage in which Jefferson had criticized the King for participation in the African slave trade. Most of the incongruities that the paper discusses concerned Jefferson’s assumption that early America was somehow exempt from standard colonial practice; the divergence between his apparent claims about the rights of “all men” and what we know, and what must surely have been knowable at the time Jefferson was writing, concerning the rights of people who are not white males, or indeed propertied white males; and finally Jefferson’s baseless claim that governments properly rule only by the consent of the governed.

The Declaration of Independence: A History Moment. (2019, Jul 17). Retrieved from https://papersowl.com/examples/the-declaration-of-independence-a-history-moment/