A Loyalists View of the Declaration of Independence 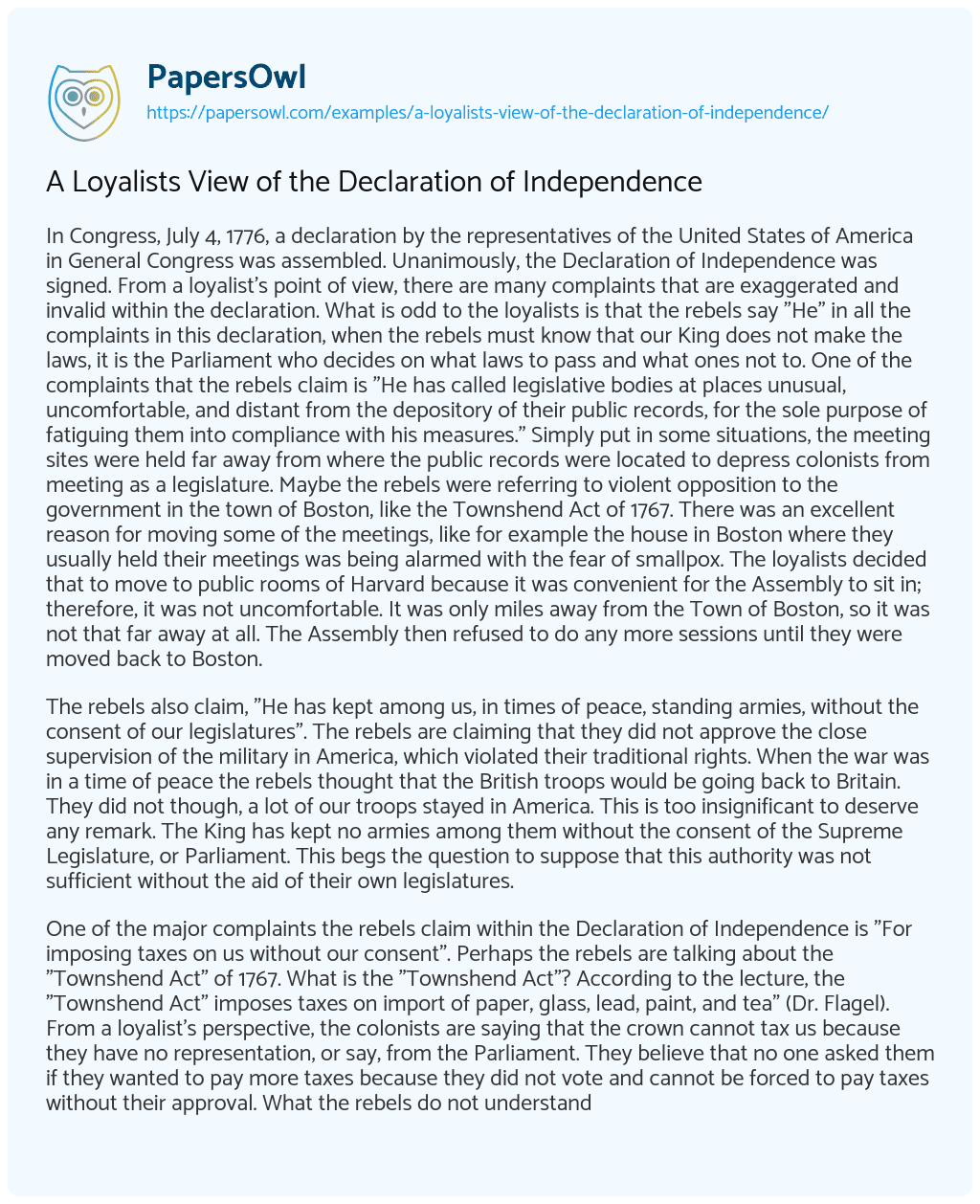 In Congress, July 4, 1776, a declaration by the representatives of the United States of America in General Congress was assembled. Unanimously, the Declaration of Independence was signed. From a loyalist’s point of view, there are many complaints that are exaggerated and invalid within the declaration. What is odd to the loyalists is that the rebels say “He” in all the complaints in this declaration, when the rebels must know that our King does not make the laws, it is the Parliament who decides on what laws to pass and what ones not to. One of the complaints that the rebels claim is “He has called legislative bodies at places unusual, uncomfortable, and distant from the depository of their public records, for the sole purpose of fatiguing them into compliance with his measures.” Simply put in some situations, the meeting sites were held far away from where the public records were located to depress colonists from meeting as a legislature. Maybe the rebels were referring to violent opposition to the government in the town of Boston, like the Townshend Act of 1767. There was an excellent reason for moving some of the meetings, like for example the house in Boston where they usually held their meetings was being alarmed with the fear of smallpox. The loyalists decided that to move to public rooms of Harvard because it was convenient for the Assembly to sit in; therefore, it was not uncomfortable. It was only miles away from the Town of Boston, so it was not that far away at all. The Assembly then refused to do any more sessions until they were moved back to Boston.

The rebels also claim, “He has kept among us, in times of peace, standing armies, without the consent of our legislatures”. The rebels are claiming that they did not approve the close supervision of the military in America, which violated their traditional rights. When the war was in a time of peace the rebels thought that the British troops would be going back to Britain. They did not though, a lot of our troops stayed in America. This is too insignificant to deserve any remark. The King has kept no armies among them without the consent of the Supreme Legislature, or Parliament. This begs the question to suppose that this authority was not sufficient without the aid of their own legislatures.

One of the major complaints the rebels claim within the Declaration of Independence is “For imposing taxes on us without our consent”. Perhaps the rebels are talking about the “Townshend Act” of 1767. What is the “Townshend Act”? According to the lecture, the “Townshend Act” imposes taxes on import of paper, glass, lead, paint, and tea” (Dr. Flagel). From a loyalist’s perspective, the colonists are saying that the crown cannot tax us because they have no representation, or say, from the Parliament. They believe that no one asked them if they wanted to pay more taxes because they did not vote and cannot be forced to pay taxes without their approval. What the rebels do not understand is that since the British protected the colonies they believe that it is fair to have them help pay off their debts. Because of the “Townshend Act” we are collecting the taxes on paper, tea, and glass that we believe we are owed.

A fourth complaint the rebels claim is “For transporting us beyond seas to be tried for pretended offenses”. This complaint means that sometimes the colonists are sent to England for trial for crimes against the king’s property. Perhaps the rebels believe that since they are in America then they should have an American judge to run their trials to decide if they are guilty or innocent of what they are being accused of. When in reality even though they are living on American soil, they are still a British subject. So, anyone that has committed a crime will be in front of a British judge that is either appointed or chosen by King George III. Sometimes the British judge will be sent to America and sometimes the suspect will be sent to London to be in front of the judge.

The last complaint that is somewhat worthy of talking about is “He has plundered our seas, ravaged our coasts, burnt our towns, and destroyed the lives of our people”. This means that according to the rebels, the king’s troops have declared war on them because the king declared that he will no longer be protecting their lives, liberties, and property. The only reason that the king has decided this is because the colonists have started a rebellion against the British. The rebels have no idea about the all the penalties of the laws that they have broken. Before the King decided to declare war on the rebels, the colonists had already renounced their allegiance to the British. The rebels have appointed officers of their own, modeled their own civil government, and appointed a general government. They have become independent from the crown and because of their choice the crown needed to show them that if they want to become enemies then they can become enemies.

In conclusion, all of these complaints are exaggerated and very invalid from a loyalist’s perspective. Many of the complaints that are in the Declaration of Independence have no use in even being there at all, none of them make sense. The crown has done everything right and the rebels were just jealous of the crown, so they decided to go against it. Even though the Declaration of Independence stated that “all men are created equal”, many of the people that lived in America felt as if the declaration did no represent them. These rebels tried to make everyone happy and make everything equal when in reality all they did was make more people mad. At least in Britain, everyone knew where they stood in society, even if everyone was not equal.

A Loyalists View of the Declaration of Independence. (2019, Nov 28). Retrieved from https://papersowl.com/examples/a-loyalists-view-of-the-declaration-of-independence/