The Connection of Artificial Intelligence and Marketing 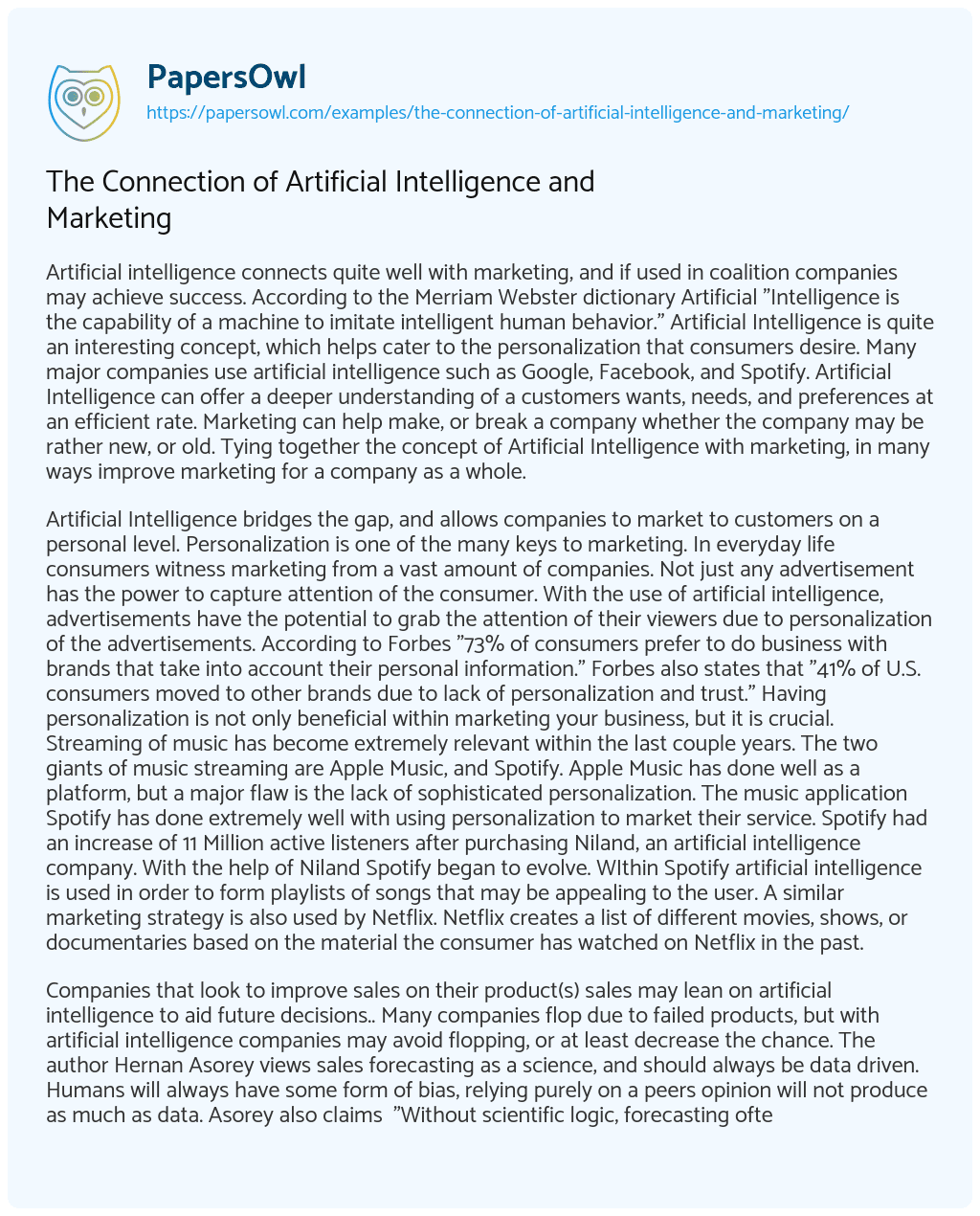 Artificial Intelligence bridges the gap, and allows companies to market to customers on a personal level. Personalization is one of the many keys to marketing. In everyday life consumers witness marketing from a vast amount of companies. Not just any advertisement has the power to capture attention of the consumer. With the use of artificial intelligence, advertisements have the potential to grab the attention of their viewers due to personalization of the advertisements. According to Forbes “73% of consumers prefer to do business with brands that take into account their personal information.” Forbes also states that “41% of U.S. consumers moved to other brands due to lack of personalization and trust.” Having personalization is not only beneficial within marketing your business, but it is crucial. Streaming of music has become extremely relevant within the last couple years. The two giants of music streaming are Apple Music, and Spotify. Apple Music has done well as a platform, but a major flaw is the lack of sophisticated personalization. The music application Spotify has done extremely well with using personalization to market their service. Spotify had an increase of 11 Million active listeners after purchasing Niland, an artificial intelligence company. With the help of Niland Spotify began to evolve. WIthin Spotify artificial intelligence is used in order to form playlists of songs that may be appealing to the user. A similar marketing strategy is also used by Netflix. Netflix creates a list of different movies, shows, or documentaries based on the material the consumer has watched on Netflix in the past.

Companies that look to improve sales on their product(s) sales may lean on artificial intelligence to aid future decisions.. Many companies flop due to failed products, but with artificial intelligence companies may avoid flopping, or at least decrease the chance. The author Hernan Asorey views sales forecasting as a science, and should always be data driven. Humans will always have some form of bias, relying purely on a peers opinion will not produce as much as data. Asorey also claims  “Without scientific logic, forecasting often happens on one of the two ends of a spectrum: either overly optimistic or overly pessimistic.” In the case of a business that may want to succeed, heeding the words of Hernan Asorey may be an extremely beneficial decision. Accuracy within sales decisions is absolutely crucial, without science, the company can basically be taking a shot in the dark. For companies that are successful, they may also use artificial intelligence to narrow down issues with the product. Artificial intelligence can be used to access information that may be discussed online. With the information found by the artificial intelligence companies may make changes in order generate more profits. Call of Duty Black Ops Four is a video game created by Activision. If Call of Duty: Black Ops Four did not sell well, Activision may consider using artificial intelligence to fix the current game. The data will be received from different sites where the video game may be discussed. Hypothetically after making changes to the game, Activision will see a better rate of sales compared to beforehand.

Social media has evolved tremendously since it was first introduced. Instagram, Facebook, and Twitter are all examples of social media pages that give users a clean slate to write as they please. Users of social media sites have the ability to reach people anywhere on a personal level. Unfortunately, not every person on social media will use their platform for positivity. Cyberbullying has been quite an issue throughout the years that social media has been around for. Fortunately with the help of artificial intelligence Instagram can detect if a person is bullying another. The artificial intelligence machine being used is named the “Enhanced Comment Filter.” Originally the machine detected explicit language. In October 2018 Instagram revamped the “Enhanced Comment Filter” to “Proactively detect bullying” according to James Vincent of The Verge. Having the “Enhanced Comment Filter” is great for Instagram’s marketing, due to the message it sends out to the users, and potential users. Instagram does not support bullying, and protects their users. As shown in the graph “Social Media Users” Approximately 77% of United States uses at least a form of social media. Without artificial intelligence, catching people bullying on instagram would be a rarity.

The Connection of Artificial Intelligence and Marketing. (2019, Oct 27). Retrieved from https://papersowl.com/examples/the-connection-of-artificial-intelligence-and-marketing/

Use of Artificial Intelligence in Marketing