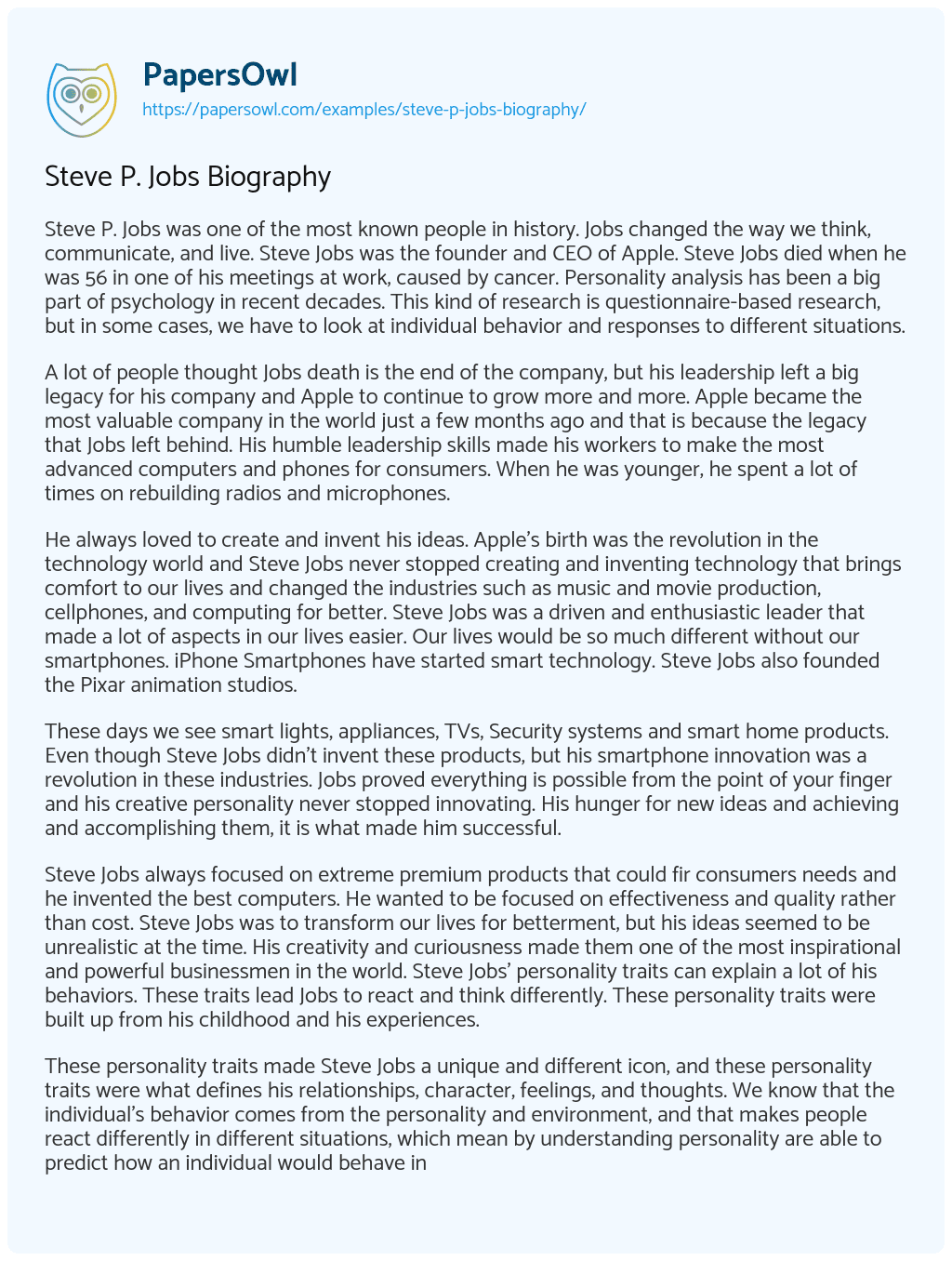 Steve P. Jobs was one of the most known people in history. Jobs changed the way we think, communicate, and live. Steve Jobs was the founder and CEO of Apple. Steve Jobs died when he was 56 in one of his meetings at work, caused by cancer. Personality analysis has been a big part of psychology in recent decades. This kind of research is questionnaire-based research, but in some cases, we have to look at individual behavior and responses to different situations.

A lot of people thought Jobs death is the end of the company, but his leadership left a big legacy for his company and Apple to continue to grow more and more. Apple became the most valuable company in the world just a few months ago and that is because the legacy that Jobs left behind. His humble leadership skills made his workers to make the most advanced computers and phones for consumers. When he was younger, he spent a lot of times on rebuilding radios and microphones.

He always loved to create and invent his ideas. Apple’s birth was the revolution in the technology world and Steve Jobs never stopped creating and inventing technology that brings comfort to our lives and changed the industries such as music and movie production, cellphones, and computing for better. Steve Jobs was a driven and enthusiastic leader that made a lot of aspects in our lives easier. Our lives would be so much different without our smartphones. iPhone Smartphones have started smart technology. Steve Jobs also founded the Pixar animation studios.

These days we see smart lights, appliances, TVs, Security systems and smart home products. Even though Steve Jobs didn’t invent these products, but his smartphone innovation was a revolution in these industries. Jobs proved everything is possible from the point of your finger and his creative personality never stopped innovating. His hunger for new ideas and achieving and accomplishing them, it is what made him successful.

Steve Jobs always focused on extreme premium products that could fir consumers needs and he invented the best computers. He wanted to be focused on effectiveness and quality rather than cost. Steve Jobs was to transform our lives for betterment, but his ideas seemed to be unrealistic at the time. His creativity and curiousness made them one of the most inspirational and powerful businessmen in the world. Steve Jobs’ personality traits can explain a lot of his behaviors. These traits lead Jobs to react and think differently. These personality traits were built up from his childhood and his experiences.

Steve Jobs’ openness to experience was one of the most important traits that he had and that is what made his work remarkable. Jobs had an appreciation for art, emotion, adventure, unusual ideas, imaginative and curious. Openness describes how creative an individual is. Openness also represents how open an individual is to try new adventures and new experiences. Intellect and liberalism are two factors that indicate that the person is willing to play with ideas and is open-minded to new and unusual ideas, and these individuals like to challenge authority, convention, and traditional values.

Conscientiousness is another personality trait that describes Steve Jobs as organized and goal oriented. Jobs pursued his ideas with determination and also his self-efficacy, orderliness, dutifulness, and achievement striving, is obvious from his confidence of ability to accomplish a task, and being organized, and as a leader, he always showed a sense of duty and obligation, and finishing the task thoroughly. This personality trait shows how Jobs always thought about the result before starting a task.

Steve Jobs also was an extravert person and we know that because he was outgoing and talkative, sociable, and enjoyed social situations. Steve job started his own companies and that requires to be more creative and encourage others to try something different. Steve Jobs had a high level of energy and even when he was sick he still showed up to work and finished his tasks. Jobs always was enthusiastic, action-oriented and seek more excitement and when he lost Apple Inc, he became a little bit introvert, because he was less energetic and had a lower level of activities compare his past.

Steve Jobs was always friendly to his employees and people. He enjoyed showing his feelings toward other people and made friends easily and he was a gregarious individual and he genuinely enjoyed being around people and spend more time in social crowds. Steve Jobs had a high level of agreeableness and had a tendency to be compassionate, and more cooperative towards others. Steve Jobs got along with everybody and maintained good and healthy relationships. Trust, morality, altruism, cooperation, modesty, and sympathy are some of Steve Jobs characteristic traits.

When we look at Apple and how the company operates, we clearly see the legacy Jobs left still is valuable and employees live those values. Steve Jobs trusted his employees and in “keyNote” meeting always mentioned how great his employees are and everybody has good intentions. Lastly, we can mention Steve Jobs neuroticism personality trait. Steve Jobs was great at controlling his temper and negative feelings. Even we everybody thought that the company is going out of business Steve Jobs maintained a positive attitude.

Steve Jobs experiences in life made him who really became, and it wasn’t always an easy path for him but the events that occurred in his life made him the Steve Jobs. Steve Jobs dropped out of college, and proved not everybody with a degree will succeed in life. Steve Jobs could have been working for a small company for the rest of his life if it wasn’t for aspiration and determinations.

His remarkable legacy helps us to break down the events and experiences of his life and it helps us to understand the personality and shaping process of his personality. Steve Jobs decision making shows the nature of his thoughts, and he always what he learned from experience and his environment and he took advantage of opportunities. Steve Jobs legacy was so powerful that even after his death everybody felt his impact on their lives.