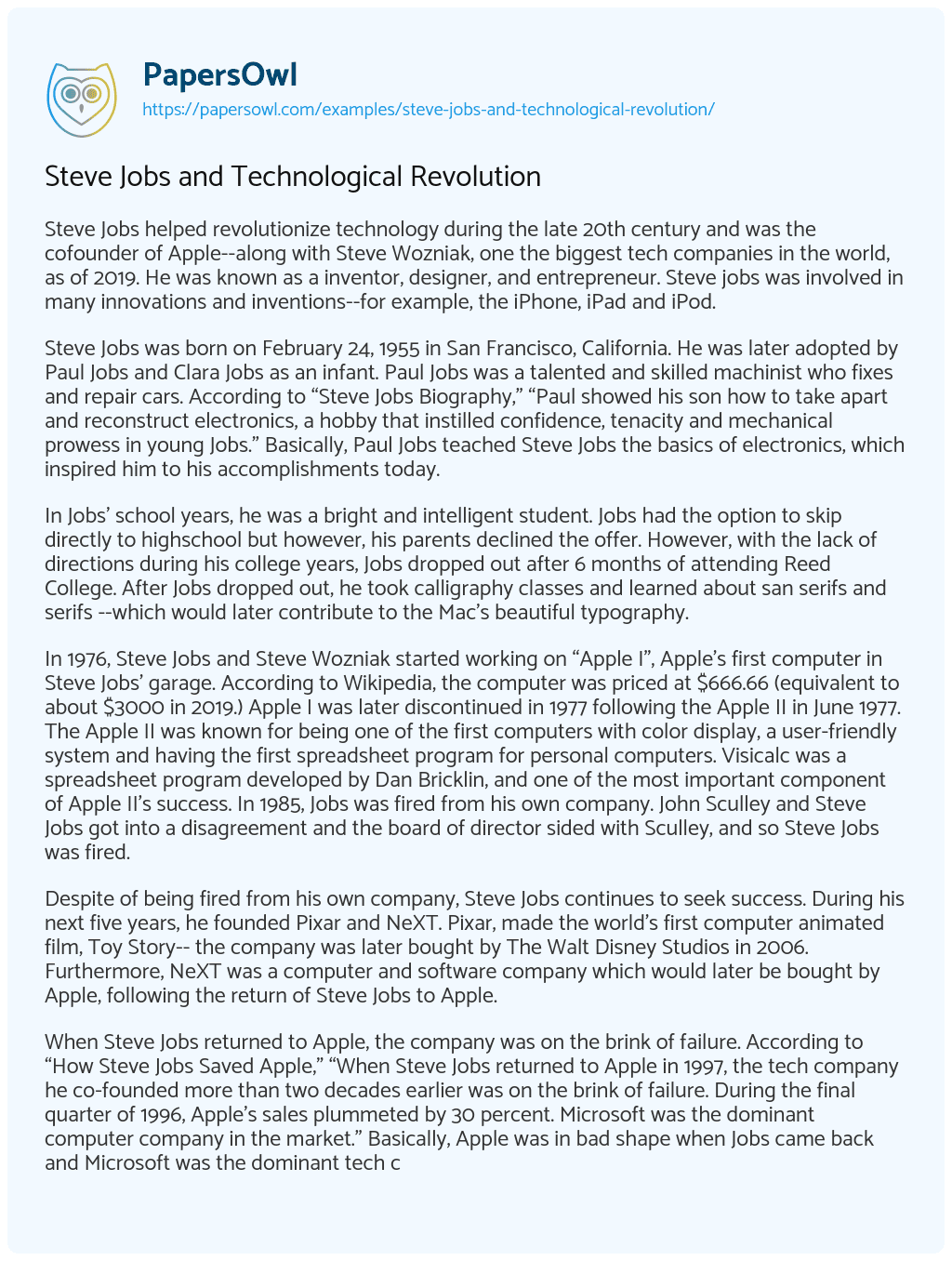 Steve Jobs helped revolutionize technology during the late 20th century and was the cofounder of Apple–along with Steve Wozniak, one the biggest tech companies in the world, as of 2019. He was known as a inventor, designer, and entrepreneur. Steve jobs was involved in many innovations and inventions–for example, the iPhone, iPad and iPod.

Steve Jobs was born on February 24, 1955 in San Francisco, California. He was later adopted by Paul Jobs and Clara Jobs as an infant. Paul Jobs was a talented and skilled machinist who fixes and repair cars. According to “Steve Jobs Biography,” “Paul showed his son how to take apart and reconstruct electronics, a hobby that instilled confidence, tenacity and mechanical prowess in young Jobs.” Basically, Paul Jobs teached Steve Jobs the basics of electronics, which inspired him to his accomplishments today.

In Jobs’ school years, he was a bright and intelligent student. Jobs had the option to skip directly to highschool but however, his parents declined the offer. However, with the lack of directions during his college years, Jobs dropped out after 6 months of attending Reed College. After Jobs dropped out, he took calligraphy classes and learned about san serifs and serifs –which would later contribute to the Mac’s beautiful typography.

In 1976, Steve Jobs and Steve Wozniak started working on “Apple I”, Apple’s first computer in Steve Jobs’ garage. According to Wikipedia, the computer was priced at $666.66 (equivalent to about $3000 in 2019.) Apple I was later discontinued in 1977 following the Apple II in June 1977. The Apple II was known for being one of the first computers with color display, a user-friendly system and having the first spreadsheet program for personal computers. Visicalc was a spreadsheet program developed by Dan Bricklin, and one of the most important component of Apple II’s success. In 1985, Jobs was fired from his own company. John Sculley and Steve Jobs got into a disagreement and the board of director sided with Sculley, and so Steve Jobs was fired.

Despite of being fired from his own company, Steve Jobs continues to seek success. During his next five years, he founded Pixar and NeXT. Pixar, made the world’s first computer animated film, Toy Story– the company was later bought by The Walt Disney Studios in 2006. Furthermore, NeXT was a computer and software company which would later be bought by Apple, following the return of Steve Jobs to Apple.

When Steve Jobs returned to Apple, the company was on the brink of failure. According to “How Steve Jobs Saved Apple,” “When Steve Jobs returned to Apple in 1997, the tech company he co-founded more than two decades earlier was on the brink of failure. During the final quarter of 1996, Apple’s sales plummeted by 30 percent. Microsoft was the dominant computer company in the market.” Basically, Apple was in bad shape when Jobs came back and Microsoft was the dominant tech company. After Jobs came back, he created the foundation for Apple’s innovations. Apple went from a company on a brink of failure to inventing the iPod, a portable device for storing and playing videos in 2001– the iPhone in 2007, which revolutionized the smartphone era.

In 2003, Jobs was diagnosed with cancer. According to Steve Jobs’ speech– “Commencement Address,” “ The doctors told me this was almost certainly a type of cancer that is incurable, and that I should expect to live no longer than three to six months. My doctor advised me to go home and get my affairs in order, which is doctor’s code for prepare to die.” Basically the doctor told Jobs that the cancer can’t be cured, he only has three to six months left and the doctor suggested that he should be prepared for his death. Despite of the doctor’s words, later that same evening, Jobs had a biopsy and it turned out that the cancer was rare and actually curable with surgery.

Despite of the cancer being curable, His health took a turn for the worse. Consequently, Jobs resigned as the Chief Executive Officer of Apple and was replaced by Tim Cook in 2011. Two months later, on October 5, 2011– Steve Jobs was announced dead from pancreatic cancer, losing his long and painful battle against cancer. Despite of his death, history has already been made. Steve Jobs’ company continues to succeed, becoming the first ever company worth 1 trillion dollars in 2018.