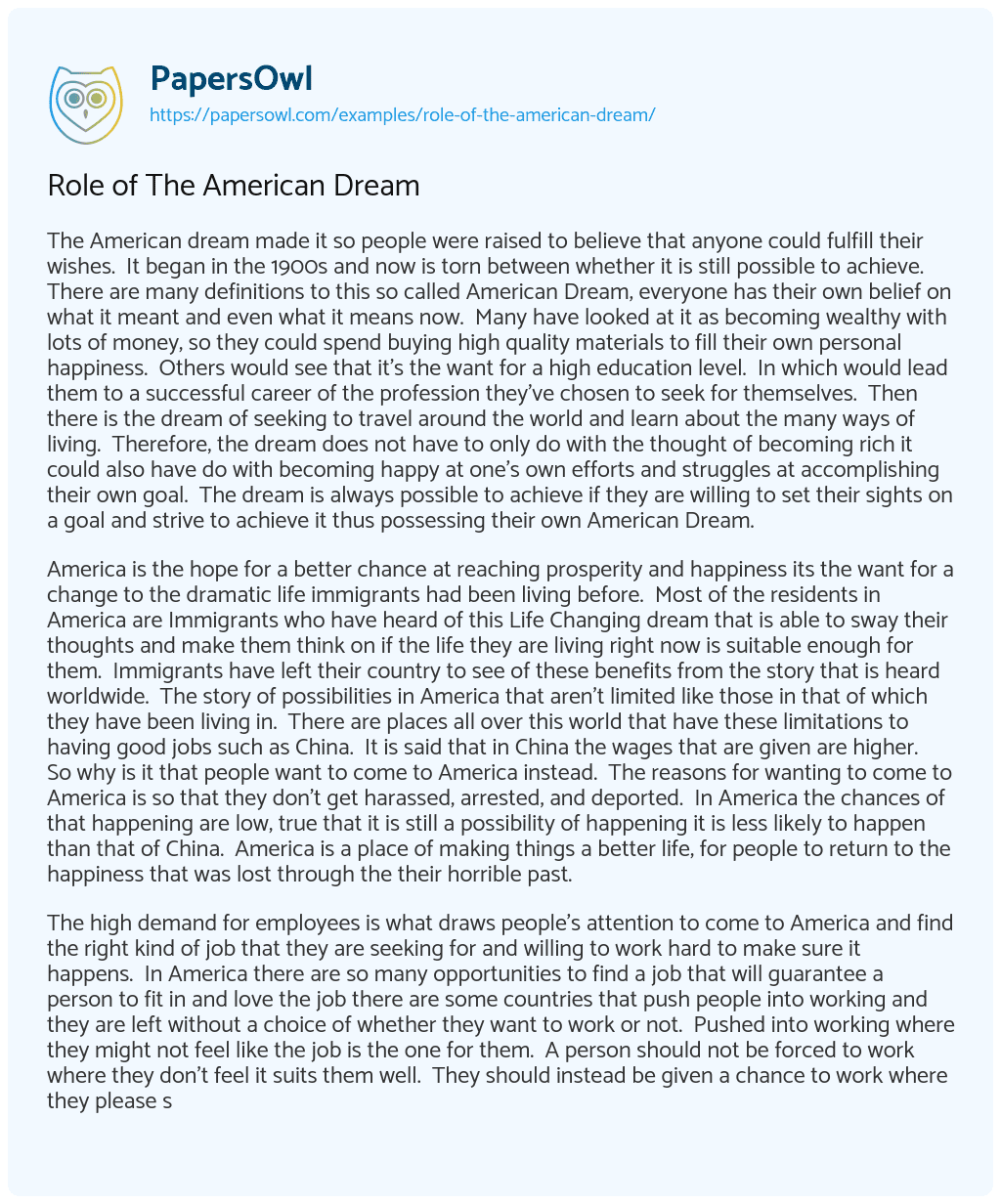 The American dream made it so people were raised to believe that anyone could fulfill their wishes.  It began in the 1900s and now is torn between whether it is still possible to achieve.  There are many definitions to this so called American Dream, everyone has their own belief on what it meant and even what it means now.  Many have looked at it as becoming wealthy with lots of money, so they could spend buying high quality materials to fill their own personal happiness.  Others would see that it’s the want for a high education level.  In which would lead them to a successful career of the profession they’ve chosen to seek for themselves.  Then there is the dream of seeking to travel around the world and learn about the many ways of living.  Therefore, the dream does not have to only do with the thought of becoming rich it could also have do with becoming happy at one’s own efforts and struggles at accomplishing their own goal.  The dream is always possible to achieve if they are willing to set their sights on a goal and strive to achieve it thus possessing their own American Dream.

America is the hope for a better chance at reaching prosperity and happiness its the want for a change to the dramatic life immigrants had been living before.  Most of the residents in America are Immigrants who have heard of this Life Changing dream that is able to sway their thoughts and make them think on if the life they are living right now is suitable enough for them.  Immigrants have left their country to see of these benefits from the story that is heard worldwide.  The story of possibilities in America that aren’t limited like those in that of which they have been living in.  There are places all over this world that have these limitations to having good jobs such as China.  It is said that in China the wages that are given are higher.  So why is it that people want to come to America instead.  The reasons for wanting to come to America is so that they don’t get harassed, arrested, and deported.  In America the chances of that happening are low, true that it is still a possibility of happening it is less likely to happen than that of China.  America is a place of making things a better life, for people to return to the happiness that was lost through the their horrible past.

The high demand for employees is what draws people’s attention to come to America and find the right kind of job that they are seeking for and willing to work hard to make sure it happens.  In America there are so many opportunities to find a job that will guarantee a person to fit in and love the job there are some countries that push people into working and they are left without a choice of whether they want to work or not.  Pushed into working where they might not feel like the job is the one for them.  A person should not be forced to work where they don’t feel it suits them well.  They should instead be given a chance to work where they please so long as they meet the requirements to do so.  In America there are so many chances and opportunities to achieve their dream. America opens up and gives out to people that need jobs this is why people have come to the United States to prosper and find happiness.  These jobs in America are for everyone they don’t always tend to need a lot of requirements and there is all these different types of jobs that are out there that bring people out to enjoy what they are working in.

The American dream is possible for those that are willing to work hard and show dedication to their job.  People can’t just lay around expecting and hoping the dream will come true for them.  That’s not how the dream works they have to get up and push themselves to accomplish something in their life.  Someone who strives for perfection or something great in their life will be sure to succeed in living a happy life.  There is so much opportunity out there for them to find whether it be big or small.  People who are on their phones tend to forget about the outside world.  They focus on that one little thing and they are bound to forget what it is that needs to be done they forget what goals they have set.  Its an addiction and its bound to make people fail throughout their lives.  Children today are being raised to use phones causing them to not interact socially which is a bad thing for them and the future.  It’s not only taking place in children’s lives but also adults today as well and this is affecting the possibility of successfully achieving their dream.  It also affects the how hard people are willing to work for something they want to happen.  It is their choice whether or not they choose to succeed in life.  So of course the dream is possible to achieve its whether or not their willing to reach out and grab it or they can choose to lay back and relax so that they end up destroying everything they have worked hard for.

The American Dream is under a struggle from people who are wanting money all for themselves it is up to other people to bring this to end or else they will keep losing more money then how will the American Dream stay alive.  People are struggling during these tough times of corruption under those in power of companies.  Companies such as Walmart, Apple, and a bunch more are stealing money from people making profit off of them.  So how can the American Dream become a reality for those if its getting stolen by greedy people.  People need to fight for their money to be given to them they have earned it and yet their tips are taken from them and they are made to work after hours or overtime without a pay.  These were huge problems in the past and now they are slowly returning due to Trump.  The Dream can still be a possibility in some places but if this continues and spreads everywhere it wouldn’t be possible and the dream would vanish forever.

The American Dream plays a role in racism where certain races are not accepted into a place of work.

America the place where everyone hears is the land of opportunity to succeed throughout life and accomplish much more.  The dream is a reality to which one must put in great time and effort into.  The dream is not a fantasy it is a opportunity that is sought out by many from all over the world.  If they wish to profit more than they have they must not be lazy and go for the easy way of things.  They will always strive to accomplish so much more.  Americans or not opportunity is for all in America but it is up to them whether or not they wish to seek out their own dream full of content and hardships.

Role of The American Dream. (2019, Apr 25). Retrieved from https://papersowl.com/examples/role-of-the-american-dream/

American Dream and the Great Gatsby