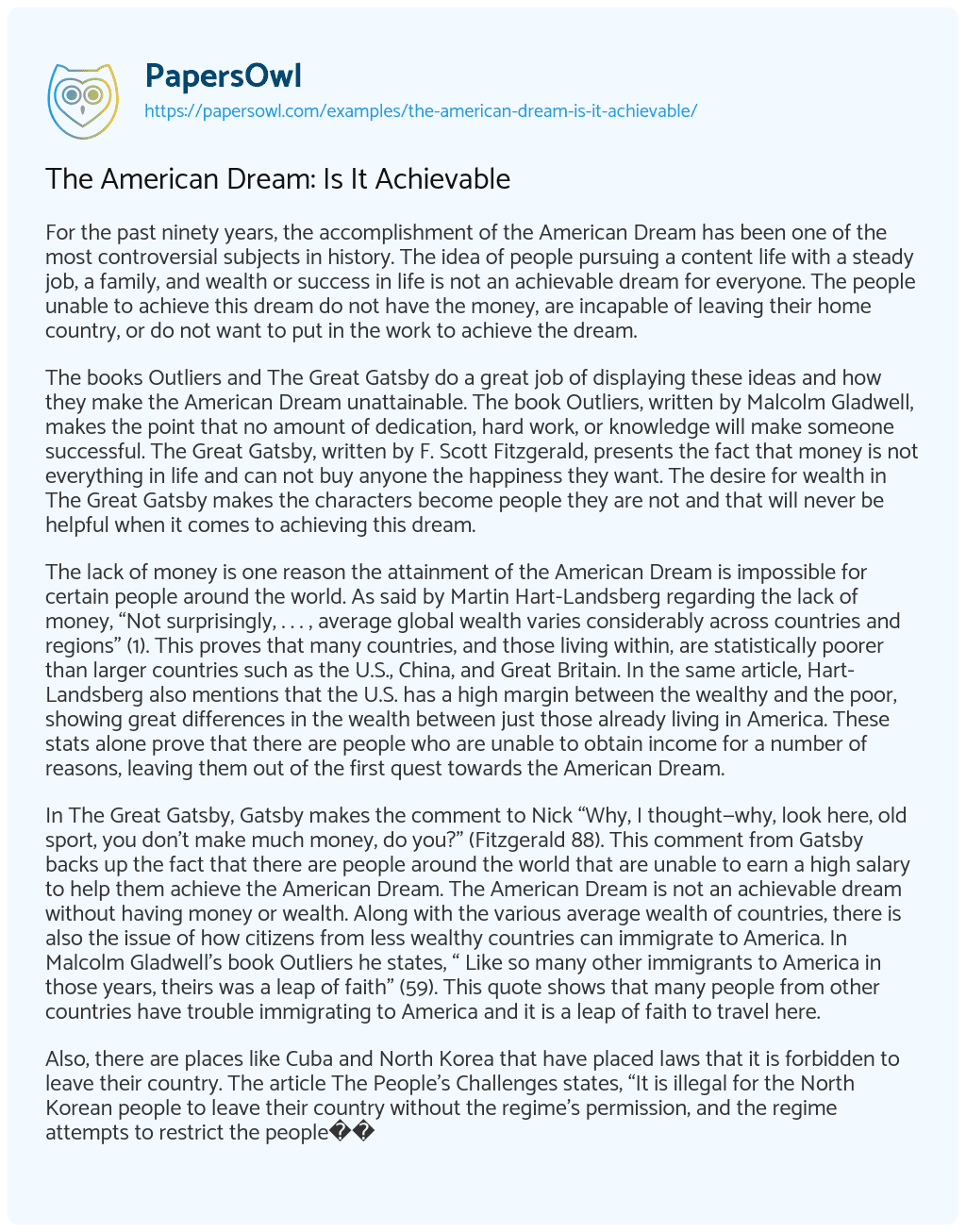 For the past ninety years, the accomplishment of the American Dream has been one of the most controversial subjects in history. The idea of people pursuing a content life with a steady job, a family, and wealth or success in life is not an achievable dream for everyone. The people unable to achieve this dream do not have the money, are incapable of leaving their home country, or do not want to put in the work to achieve the dream.

The books Outliers and The Great Gatsby do a great job of displaying these ideas and how they make the American Dream unattainable. The book Outliers, written by Malcolm Gladwell, makes the point that no amount of dedication, hard work, or knowledge will make someone successful. The Great Gatsby, written by F. Scott Fitzgerald, presents the fact that money is not everything in life and can not buy anyone the happiness they want. The desire for wealth in The Great Gatsby makes the characters become people they are not and that will never be helpful when it comes to achieving this dream.

The lack of money is one reason the attainment of the American Dream is impossible for certain people around the world. As said by Martin Hart-Landsberg regarding the lack of money, “Not surprisingly, . . . , average global wealth varies considerably across countries and regions” (1). This proves that many countries, and those living within, are statistically poorer than larger countries such as the U.S., China, and Great Britain. In the same article, Hart-Landsberg also mentions that the U.S. has a high margin between the wealthy and the poor, showing great differences in the wealth between just those already living in America. These stats alone prove that there are people who are unable to obtain income for a number of reasons, leaving them out of the first quest towards the American Dream.

In The Great Gatsby, Gatsby makes the comment to Nick “Why, I thought—why, look here, old sport, you don’t make much money, do you?” (Fitzgerald 88). This comment from Gatsby backs up the fact that there are people around the world that are unable to earn a high salary to help them achieve the American Dream. The American Dream is not an achievable dream without having money or wealth. Along with the various average wealth of countries, there is also the issue of how citizens from less wealthy countries can immigrate to America. In Malcolm Gladwell’s book Outliers he states, “ Like so many other immigrants to America in those years, theirs was a leap of faith” (59). This quote shows that many people from other countries have trouble immigrating to America and it is a leap of faith to travel here.

The people not willing to work hard are faced with a lack of job opportunities and money. A quote from Outliers says “You can’t be poor, because if you have to hold down a part-time job on the side to help make ends meet, there won’t be time left in the day to practice enough”(Gladwell 17). Gladwell is saying that it is not possible for someone to be poor because there is always a way for someone to make enough money to have a stable lifestyle, but they have to be willing to work extra hours to accomplish their dream. In the book Outliers, it also says, “No one rises to the top of the New York legal profession unless he or she is smart and ambitious and hardworking…” (Gladwell 67). This quote from Gladwell’s book shows that most aspirations are not achievable unless someone puts the work in to making it happen. Achieving the American Dream is not an easy task to complete, but with hard work and dedication many are able to achieve it.

Even though the American Dream has become widespread around the world it has also become much harder to obtain. This dream is not completely unachievable for all, but many do not have the key points to making this dream a reality.

The American Dream: Is It Achievable. (2021, Jun 16). Retrieved from https://papersowl.com/examples/the-american-dream-is-it-achievable/

Corruption of the American Dream