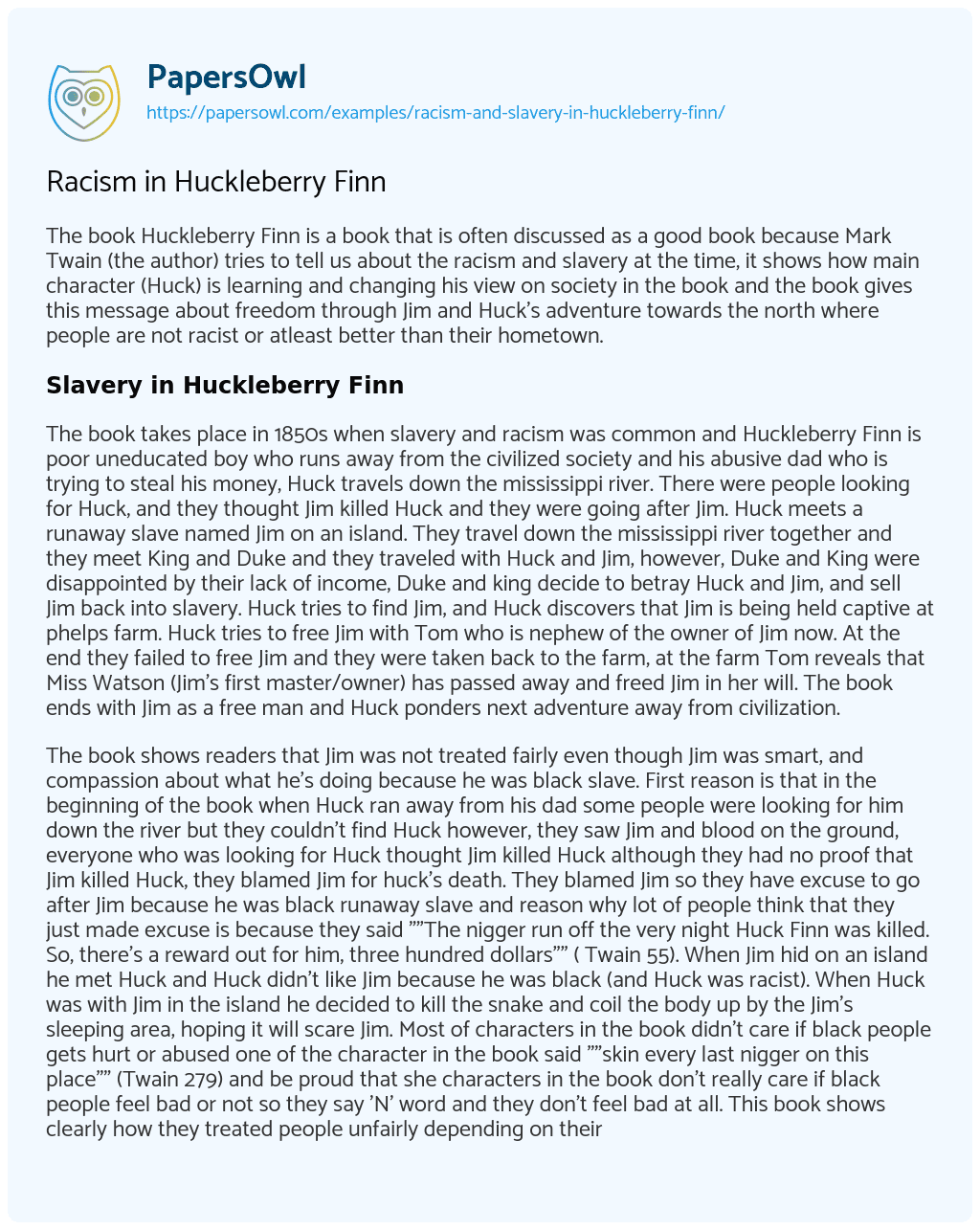 The book Huckleberry Finn is a book that is often discussed as a good book because Mark Twain (the author) tries to tell us about the racism and slavery at the time, it shows how main character (Huck) is learning and changing his view on society in the book and the book gives this message about freedom through Jim and Huck’s adventure towards the north where people are not racist or atleast better than their hometown.

The book takes place in 1850s when slavery and racism was common and Huckleberry Finn is poor uneducated boy who runs away from the civilized society and his abusive dad who is trying to steal his money, Huck travels down the mississippi river. There were people looking for Huck, and they thought Jim killed Huck and they were going after Jim. Huck meets a runaway slave named Jim on an island. They travel down the mississippi river together and they meet King and Duke and they traveled with Huck and Jim, however, Duke and King were disappointed by their lack of income, Duke and king decide to betray Huck and Jim, and sell Jim back into slavery. Huck tries to find Jim, and Huck discovers that Jim is being held captive at phelps farm. Huck tries to free Jim with Tom who is nephew of the owner of Jim now. At the end they failed to free Jim and they were taken back to the farm, at the farm Tom reveals that Miss Watson (Jim’s first master/owner) has passed away and freed Jim in her will. The book ends with Jim as a free man and Huck ponders next adventure away from civilization.

The book shows readers that Jim was not treated fairly even though Jim was smart, and compassion about what he’s doing because he was black slave. First reason is that in the beginning of the book when Huck ran away from his dad some people were looking for him down the river but they couldn’t find Huck however, they saw Jim and blood on the ground, everyone who was looking for Huck thought Jim killed Huck although they had no proof that Jim killed Huck, they blamed Jim for huck’s death. They blamed Jim so they have excuse to go after Jim because he was black runaway slave and reason why lot of people think that they just made excuse is because they said “”The nigger run off the very night Huck Finn was killed. So, there’s a reward out for him, three hundred dollars”” ( Twain 55). When Jim hid on an island he met Huck and Huck didn’t like Jim because he was black (and Huck was racist). When Huck was with Jim in the island he decided to kill the snake and coil the body up by the Jim’s sleeping area, hoping it will scare Jim. Most of characters in the book didn’t care if black people gets hurt or abused one of the character in the book said “”skin every last nigger on this place”” (Twain 279) and be proud that she characters in the book don’t really care if black people feel bad or not so they say ‘N’ word and they don’t feel bad at all. This book shows clearly how they treated people unfairly depending on their race.

The author wrote the book in Huck’s point of view (first person). The author writes the book in the way how Huck talks so grammar isn’t really good in the beginning because Huck was a poor and uneducated boy. In the beginning, Huck’s grammer was not good and he said the racist word “” It was fifteen minutes before I could work myself up to go and humble myself to a nigger; but I done it, and I warn’t ever sorry for it afterwards, neither. I didn’t do him no more mean tricks, and I wouldn’t done that one if I’d a knowed it would make him feel that way. (Twain 15.49)”” However, the author changes the way of writing towards the end a bit because when Huck was with Jim Huck learned alot from Jim and the author shows this with writing with “”better grammar and clean words”” like Huck saying “” Be done, boys! Who’s there?”” I says:It’s me.”” “”Who’s me?””George Jackson, sir.”” (Twain 17.2-17.6).”” it showed that Huck’s grammer changed lot from beginning. In the beginning of the book Huck didn’t like Jim but, at the end of the book when Jim was sold to a phelps farm Huck tried to free Jim from them even though he wasn’t caught so he could have ran away and Huck would’ve ran away if he had not changed from the beginning of the book but, The reason why Huck didn’t leave Jim is because he learned lot of stuff from Jim and Huck knew that if he left Jim behind he’s same as the people who he does not like ( civilized people).

The theme that book is trying to say is freedom and it’s telling us about the freedom that defines an individual, have right for someone to act, speak, or think without externally imposed restraints. Therefore, Mark Twain may be trying to tell a story about one’s ability to express their freedoms. An example in the beginning of the book, Huck is running away from his dad because Huck was getting abused by his dad and Huck had no free time, Huck tried to get freedom. Jim is also trying to get freedom, he was a slave, however, he ran away from Miss Watson (his master) to gain his freedom. Secondly, Huck is running away from his dad who is not giving him enough freedom and I also think Huck is running away from civilized home, He wanted to be out doing adventures with Tom Sawyer, and when he did run away he said “”Other places do seem so cramped up and smothery, but a raft don’t. You feel mighty free and easy and comfortable on a raft”” (Twain 128). Which shows that Huck feels free when he ran away from civilized home.

I think the adventure of huckleberry finn is a good book and everyone should read it because it’s telling us the slavery and racism at the time and it shows how main characters view on society changes and learning the things from people beside him and lastly this book is trying to give a message about freedom of all people. If you want to read this book you should know basic background in late 1800s it will help you to understand more of the story.