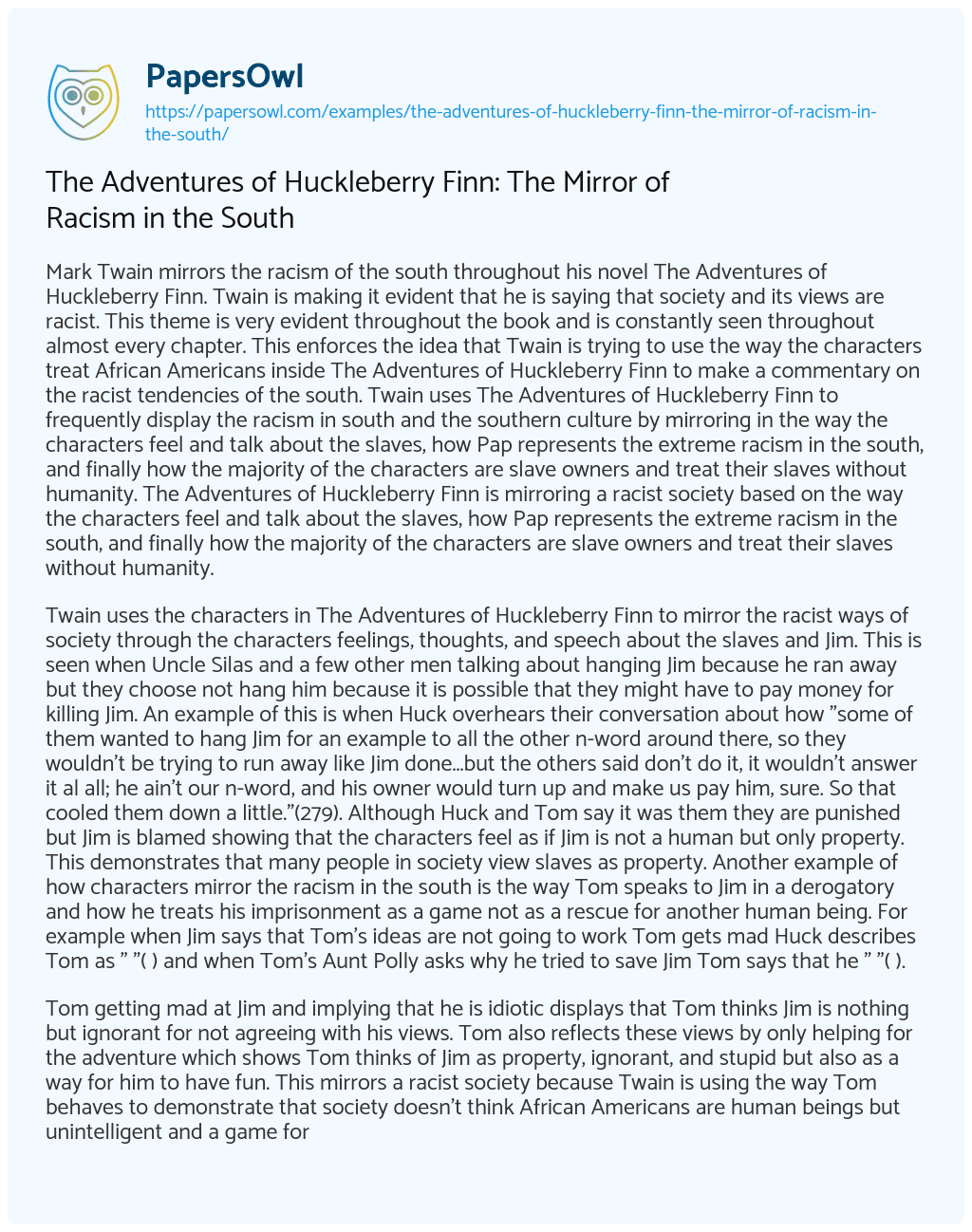 Twain uses the characters in The Adventures of Huckleberry Finn to mirror the racist ways of society through the characters feelings, thoughts, and speech about the slaves and Jim. This is seen when Uncle Silas and a few other men talking about hanging Jim because he ran away but they choose not hang him because it is possible that they might have to pay money for killing Jim. An example of this is when Huck overhears their conversation about how “some of them wanted to hang Jim for an example to all the other n-word around there, so they wouldn’t be trying to run away like Jim done…but the others said don’t do it, it wouldn’t answer it al all; he ain’t our n-word, and his owner would turn up and make us pay him, sure. So that cooled them down a little.”(279). Although Huck and Tom say it was them they are punished but Jim is blamed showing that the characters feel as if Jim is not a human but only property. This demonstrates that many people in society view slaves as property. Another example of how characters mirror the racism in the south is the way Tom speaks to Jim in a derogatory and how he treats his imprisonment as a game not as a rescue for another human being. For example when Jim says that Tom’s ideas are not going to work Tom gets mad Huck describes Tom as ” “( ) and when Tom’s Aunt Polly asks why he tried to save Jim Tom says that he ” “( ).

Tom getting mad at Jim and implying that he is idiotic displays that Tom thinks Jim is nothing but ignorant for not agreeing with his views. Tom also reflects these views by only helping for the adventure which shows Tom thinks of Jim as property, ignorant, and stupid but also as a way for him to have fun. This mirrors a racist society because Twain is using the way Tom behaves to demonstrate that society doesn’t think African Americans are human beings but unintelligent and a game for themselves to benefit from. Another way Twain reflects the racism in the south and in society is through Aunt Sally not caring about a slave dying when Tom’s ship gets blown up. For example when Huck tells Aunt Sally a slave died on the boat she replies ” ” ( ). Twain uses Aunt Sally’s indifference to show how society does not care about the lives of African Americans or colored people. Aunt Sally’s views on slaves and African Americans reflect societal views on the lives of slaves. Through these characters speech and views Twain mirrors the racism in southern society and culture. Finally Twain represents society through Mrs. Loftus saying that they think the n-word did it and pg 250 for good quote on racism Para 2 Twain shows the racism in society by Pap mirroring the extreme racist and hypocritical views in the south and in society. Pap is used to demonstrate these by the way his character talks, behaves, and thinks.

For example when Pap is talking to Huck about how african americans are allowed to vote in some states he says” When they told me there was a State in this country where they’d let that nigger vote, I drawed out. I says I’ll never vote again…I says to the people, why ain’t this nigger put up at auction and sold?”( ). Through Pap’s behavior Twain demonstrates how Pap’s views are similar to those of in southern society and are very hypocritical of himself. Pap’s views help us see how Twain is mirroring the extremer views in southern culture such as the Ku Klux Klan. He also uses Pap to reflect and bring attention how his views are hypocritical too. Another way Twain uses Pap ro mirror the south is the irony of Pap not being able to read and write is similar to African Americans but is still a racist. This mirrors how even though Pap is the same level of intelligence as Jim or other slaves, he is still treated better because of his race. For example Pap says that ” “( ). E.G the black professor who can vote. This is Pap’s way of belittling them.

This displays that even though the educated african american is a better addition to society Pap is treated better because of his race even though he is a terrible person which is representing the hypocrisy of the racism in the south. Finally through Pap speaking about Jim Twain shows us how Pap’s speech represents the racist mindset of the time. For example Pap saying that African Americans are a nuisance and he is representing a stereotypical white southerner because of his very hypocritical and hateful views. Twain uses Pap’s character to show how southern culture and society are hypocritical towards African Americans and how Pap’s speech, views, and behavior reflect this racism too.

The Adventures of Huckleberry Finn: The Mirror of Racism in the South. (2019, Apr 10). Retrieved from https://papersowl.com/examples/the-adventures-of-huckleberry-finn-the-mirror-of-racism-in-the-south/