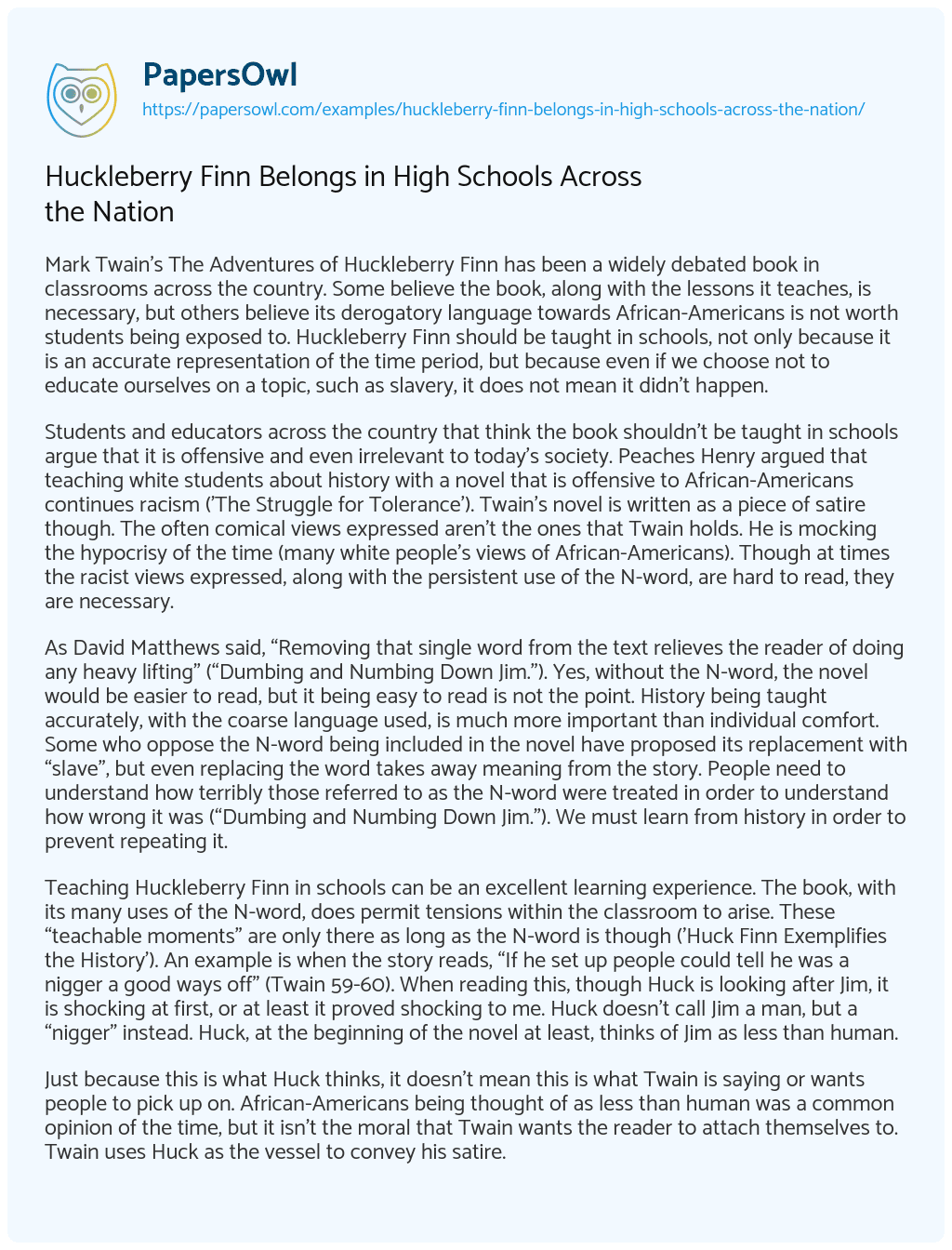 Mark Twain’s The Adventures of Huckleberry Finn has been a widely debated book in classrooms across the country. Some believe the book, along with the lessons it teaches, is necessary, but others believe its derogatory language towards African-Americans is not worth students being exposed to. Huckleberry Finn should be taught in schools, not only because it is an accurate representation of the time period, but because even if we choose not to educate ourselves on a topic, such as slavery, it does not mean it didn’t happen.

Students and educators across the country that think the book shouldn’t be taught in schools argue that it is offensive and even irrelevant to today’s society. Peaches Henry argued that teaching white students about history with a novel that is offensive to African-Americans continues racism (‘The Struggle for Tolerance’). Twain’s novel is written as a piece of satire though. The often comical views expressed aren’t the ones that Twain holds. He is mocking the hypocrisy of the time (many white people’s views of African-Americans). Though at times the racist views expressed, along with the persistent use of the N-word, are hard to read, they are necessary.

As David Matthews said, “Removing that single word from the text relieves the reader of doing any heavy lifting” (“Dumbing and Numbing Down Jim.”). Yes, without the N-word, the novel would be easier to read, but it being easy to read is not the point. History being taught accurately, with the coarse language used, is much more important than individual comfort. Some who oppose the N-word being included in the novel have proposed its replacement with “slave”, but even replacing the word takes away meaning from the story. People need to understand how terribly those referred to as the N-word were treated in order to understand how wrong it was (“Dumbing and Numbing Down Jim.”). We must learn from history in order to prevent repeating it.

Teaching Huckleberry Finn in schools can be an excellent learning experience. The book, with its many uses of the N-word, does permit tensions within the classroom to arise. These “teachable moments” are only there as long as the N-word is though (‘Huck Finn Exemplifies the History’). An example is when the story reads, “If he set up people could tell he was a nigger a good ways off” (Twain 59-60). When reading this, though Huck is looking after Jim, it is shocking at first, or at least it proved shocking to me. Huck doesn’t call Jim a man, but a “nigger” instead. Huck, at the beginning of the novel at least, thinks of Jim as less than human.

Just because this is what Huck thinks, it doesn’t mean this is what Twain is saying or wants people to pick up on. African-Americans being thought of as less than human was a common opinion of the time, but it isn’t the moral that Twain wants the reader to attach themselves to. Twain uses Huck as the vessel to convey his satire. He presents this view to show how ludicrous the opinion is. Once people realize how Twain is, in fact, condemning the poor treatment of African-Americans, they can focus on correcting the problem that it still existent today. Instructors, when teaching the novel, could incorporate many moral lessons and even give lessons on political correctness to ensure lessons are learned from past racism (‘Huck Finn Exemplifies the History’). At Piper High School, after we finished the novel, we thoroughly discussed the derogatory language and why it is thought to be so offensive. Understanding why something is wrong can help to prevent the same wrongdoings from being repeated.

The Adventures of Huckleberry Finn, along with its 219 uses of the N-word, is a must-read for high school students. The novel has been surrounded by controversy, but so have many other great stories. The book can be used not to separate races, but to instead unite. If the book’s satirical elements are comprehended, the book isn’t racist, but quite the opposite. Racist views that people held during the book’s time period is exactly what is being mocked. The racist elements of The Adventures of Huckleberry Finn were not written with the hopes of them being followed or even to condone them. In order for the book to truly be understood and viewed as it was meant, students must first be capable of recognizing elements of writing that Twain frequently used, such as satire. Without understanding Twain’s satirical writing style, the book could appear to be conveying opposite morals than intended.

Huckleberry Finn Belongs in High Schools Across the Nation. (2021, Mar 25). Retrieved from https://papersowl.com/examples/huckleberry-finn-belongs-in-high-schools-across-the-nation/