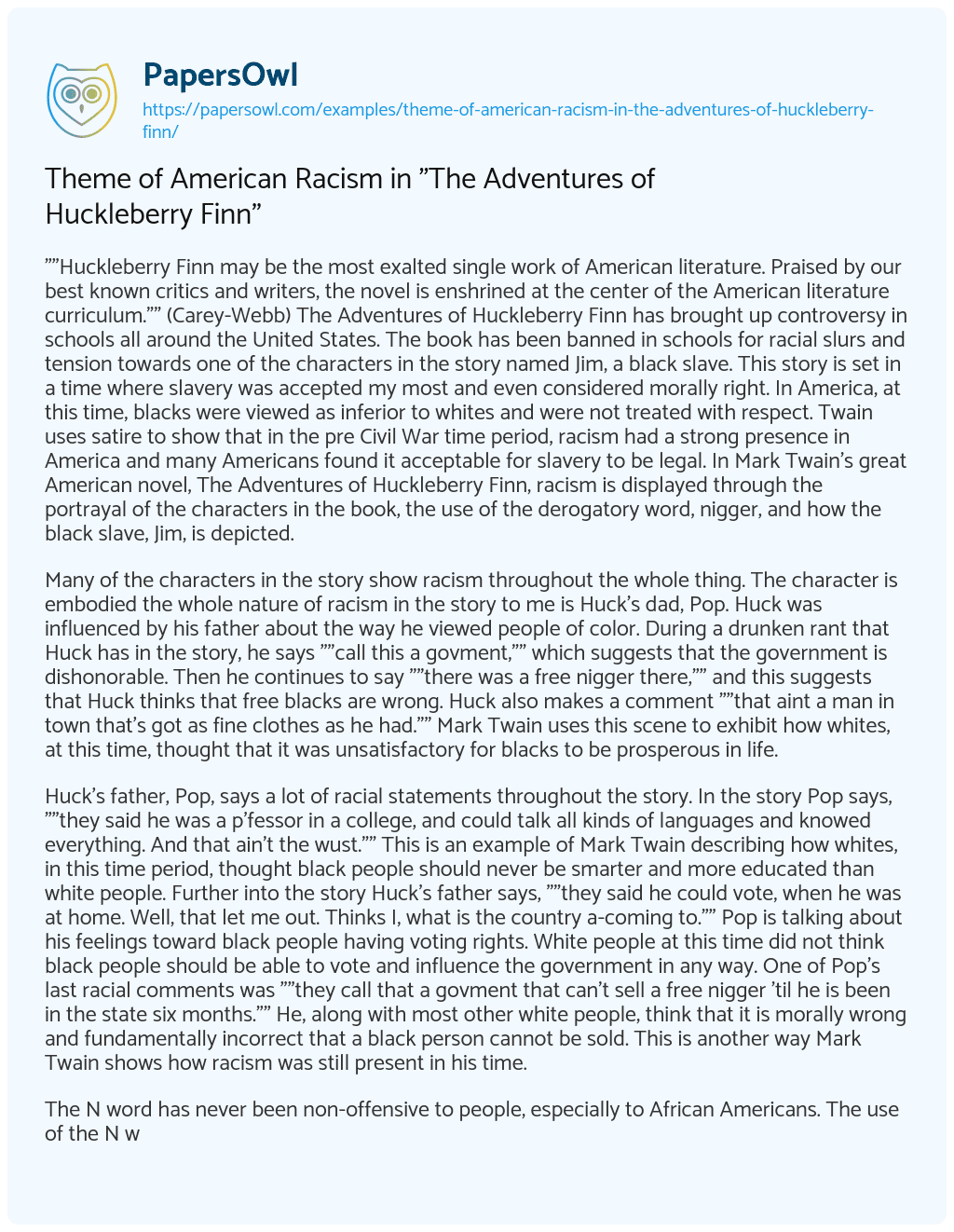 “”Huckleberry Finn may be the most exalted single work of American literature. Praised by our best known critics and writers, the novel is enshrined at the center of the American literature curriculum.”” (Carey-Webb) The Adventures of Huckleberry Finn has brought up controversy in schools all around the United States. The book has been banned in schools for racial slurs and tension towards one of the characters in the story named Jim, a black slave. This story is set in a time where slavery was accepted my most and even considered morally right. In America, at this time, blacks were viewed as inferior to whites and were not treated with respect. Twain uses satire to show that in the pre Civil War time period, racism had a strong presence in America and many Americans found it acceptable for slavery to be legal. In Mark Twain’s great American novel, The Adventures of Huckleberry Finn, racism is displayed through the portrayal of the characters in the book, the use of the derogatory word, nigger, and how the black slave, Jim, is depicted.

Many of the characters in the story show racism throughout the whole thing. The character is embodied the whole nature of racism in the story to me is Huck’s dad, Pop. Huck was influenced by his father about the way he viewed people of color. During a drunken rant that Huck has in the story, he says “”call this a govment,”” which suggests that the government is dishonorable. Then he continues to say “”there was a free nigger there,”” and this suggests that Huck thinks that free blacks are wrong. Huck also makes a comment “”that aint a man in town that’s got as fine clothes as he had.”” Mark Twain uses this scene to exhibit how whites, at this time, thought that it was unsatisfactory for blacks to be prosperous in life.

Huck’s father, Pop, says a lot of racial statements throughout the story. In the story Pop says, “”they said he was a p’fessor in a college, and could talk all kinds of languages and knowed everything. And that ain’t the wust.”” This is an example of Mark Twain describing how whites, in this time period, thought black people should never be smarter and more educated than white people. Further into the story Huck’s father says, “”they said he could vote, when he was at home. Well, that let me out. Thinks I, what is the country a-coming to.”” Pop is talking about his feelings toward black people having voting rights. White people at this time did not think black people should be able to vote and influence the government in any way. One of Pop’s last racial comments was “”they call that a govment that can’t sell a free nigger ’til he is been in the state six months.”” He, along with most other white people, think that it is morally wrong and fundamentally incorrect that a black person cannot be sold. This is another way Mark Twain shows how racism was still present in his time.

The N word has never been non-offensive to people, especially to African Americans. The use of the N word in Huckleberry Finn, has been an issue for my critics and readers of Mark Twains novel. “”Recent objection to The Adventures of Huckleberry Finn is N word dialogue. Rush (2006) calls it a racist classic. Wallace (1999:16) proclaims it “”the most grotesque example of racist trash ever written.”” (Siegfried) Mark Twain uses satire in the story of Huckleberry Finn to overemphasize the intolerance to people that have a different opinion from the one you have and to mock the behavior of white Americans during this time. Mark Twain knew that the N word was seen as a derogatory term and used it for ironic purposes in his story. He uses the N word as a “”historical necessity””(Penn State) and not to offend people. The character in Huckleberry Finn that Mark Twain used to show the ridiculousness of the N word is Jim. The negative stereotypes towards African Americans is supported by Jim and his actions. “”In chapter 6, Jim and Huck discuss “”spunkwater”” and a racist comment made by Tom Sawyer saying “”but I never see a nigger that wouldn’t lie,”” following a statement that all the boys he knew were liars.””(Penn State)

However, ironically, “”Jim is always portrayed with positive attributes, intelligence, wisdom, loyalty, and self-sacrifice.”” (Siegfried) Jim is a complex character, and he might even be more complex than Huck. Loyalty is a strong character trait Jim has. Jim is very loyal to Such throughout the novel. At one point, Jim says that Huck is the only “”white genlman dat ever kep’ his promise to ole Jim,”” when referring to Huck’s promise he kept not to turn in Jim as a runaway slave. Jim also offers his loyalty to Huck’s friends in the novel. After Tom Sawyer gets shot, Jim risks his own life to save him. Jim thinks by helping the kid, it could also mean him giving up his freedom, but still helps Tom. When Jim could not find Huck and thought he might have drowned, he was worried. However, when Huck showed up, Jim was extremely happy. He said “”it is too good for true, honey, it is too good for true, lemme look at you chile, lemme feel o’ you.”” There are points in the story where Jim shows his intelligence.

It appears that Jim has more street smarts than books smarts. He uses superstition to explain every situation or occasion. Jim shows compassion and self-sacrifice by the things he does for his family. Jim runs away when he finds out that Miss Watson is going to separate him from his family. When Huck finds out how much Jim cares for his family is shocked. Huck says, “”I do believe he cared just as much for his people as white folks does for their’n. It do not seem natural, but I reckon it is so.”” Jim is an honest family man. This “”family man”” character also transfers to his relationship with Huck. Jim becomes like a father figure to Huck as the story goes on. This relationship is “” a relationship that temporarily transgresses the depicted era’s prevalent racial hierarchies.”” (Valkeakari)

The Adventures of Huckleberry Finn, is a classic novel that Americans learned how it was to live in America before the Civil War.

Theme of American Racism in "The Adventures of Huckleberry Finn". (2020, May 05). Retrieved from https://papersowl.com/examples/theme-of-american-racism-in-the-adventures-of-huckleberry-finn/