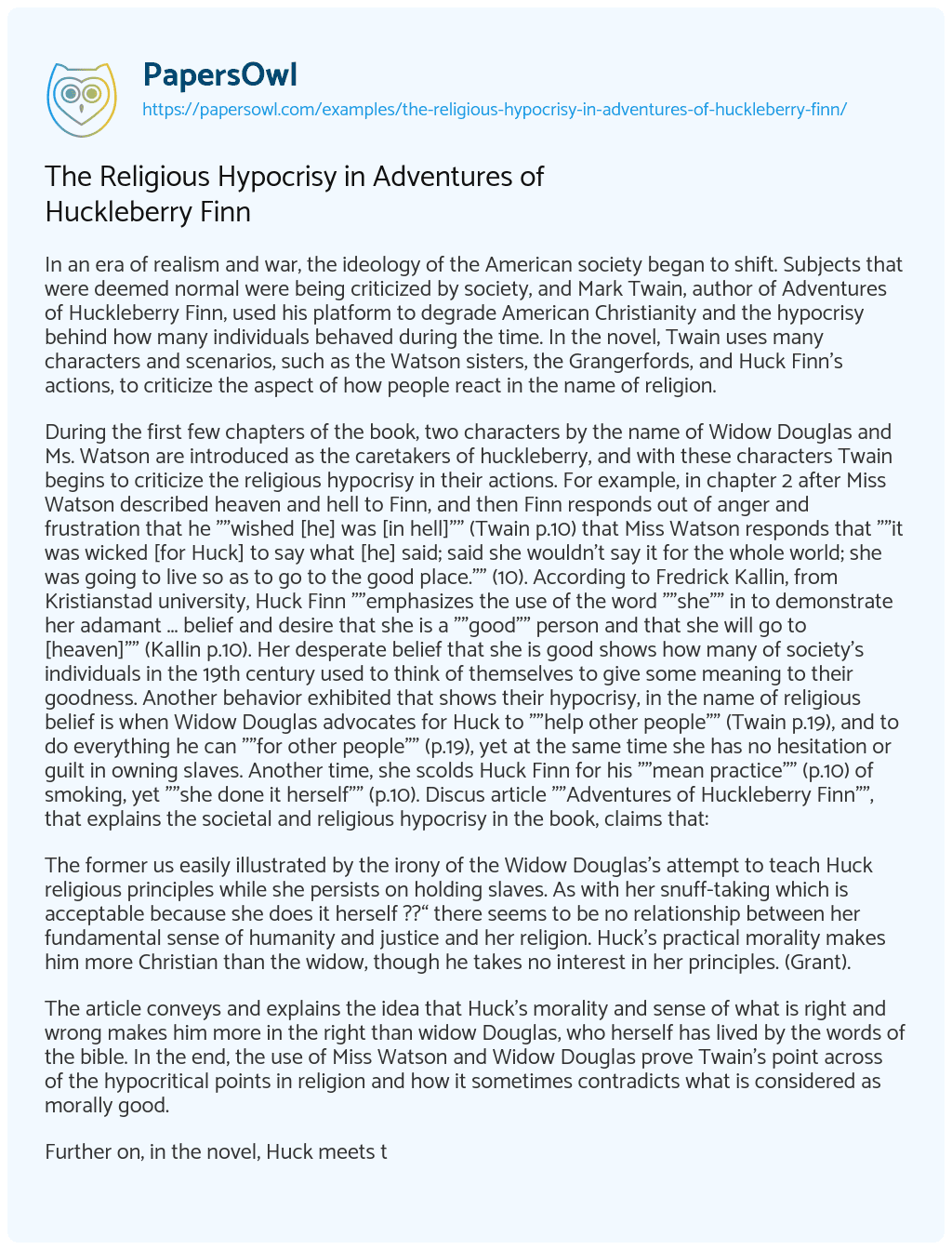 In an era of realism and war, the ideology of the American society began to shift. Subjects that were deemed normal were being criticized by society, and Mark Twain, author of Adventures of Huckleberry Finn, used his platform to degrade American Christianity and the hypocrisy behind how many individuals behaved during the time. In the novel, Twain uses many characters and scenarios, such as the Watson sisters, the Grangerfords, and Huck Finn’s actions, to criticize the aspect of how people react in the name of religion.

During the first few chapters of the book, two characters by the name of Widow Douglas and Ms. Watson are introduced as the caretakers of huckleberry, and with these characters Twain begins to criticize the religious hypocrisy in their actions. For example, in chapter 2 after Miss Watson described heaven and hell to Finn, and then Finn responds out of anger and frustration that he “”wished [he] was [in hell]”” (Twain p.10) that Miss Watson responds that “”it was wicked [for Huck] to say what [he] said; said she wouldn’t say it for the whole world; she was going to live so as to go to the good place.”” (10). According to Fredrick Kallin, from Kristianstad university, Huck Finn “”emphasizes the use of the word “”she”” in to demonstrate her adamant … belief and desire that she is a “”good”” person and that she will go to [heaven]”” (Kallin p.10). Her desperate belief that she is good shows how many of society’s individuals in the 19th century used to think of themselves to give some meaning to their goodness. Another behavior exhibited that shows their hypocrisy, in the name of religious belief is when Widow Douglas advocates for Huck to “”help other people”” (Twain p.19), and to do everything he can “”for other people”” (p.19), yet at the same time she has no hesitation or guilt in owning slaves. Another time, she scolds Huck Finn for his “”mean practice”” (p.10) of smoking, yet “”she done it herself”” (p.10). Discus article “”Adventures of Huckleberry Finn””, that explains the societal and religious hypocrisy in the book, claims that:

The former us easily illustrated by the irony of the Widow Douglas’s attempt to teach Huck religious principles while she persists on holding slaves. As with her snuff-taking which is acceptable because she does it herself ??“ there seems to be no relationship between her fundamental sense of humanity and justice and her religion. Huck’s practical morality makes him more Christian than the widow, though he takes no interest in her principles. (Grant).

The article conveys and explains the idea that Huck’s morality and sense of what is right and wrong makes him more in the right than widow Douglas, who herself has lived by the words of the bible. In the end, the use of Miss Watson and Widow Douglas prove Twain’s point across of the hypocritical points in religion and how it sometimes contradicts what is considered as morally good.

Further on, in the novel, Huck meets the Grangerfords, and their deadly feud with the Shepherdsons. Twain uses the Grangerfords to criticize many points including the mocking of southern hospitality, romanticism, and the aggression for no reason. Mark Twain also uses the Grangerfords in a scene in which they “”all went to church… the men took their guns along… and kept them between their knees… The Shepardsons done the same. It was pretty ornery preaching””all about brotherly love…everybody said it was a good sermon”” (Twain p.114). Article “”Racial and Religious Hypocrisy in Adventures of Huckleberry Finn””, claims that the fact that the families brought guns to a sermon preaching about brotherly love demonstrates the absurdity and hypocrisy of the situation displayed in the novel (Killan). Twain continues to use satire to display the situation of religion in society and how hypocritical it can become while also mocking the southern views of religion.

Throughout the novel, Twain additionally uses Huckleberry Finn himself, and his moral conflict in a way to ridicule the religious hypocrisy in society. For example, after the widow tells him about the concept of prayer, and he could get “”whatever [he] asked for”” (Twain p.19), but he never got what he wanted (a hook for his fishline); therefore, he became skeptical of prayers. According to Chrissie Henning, from University of Hawaii, in her paper “”Personal Freedom and Religion””, she claims that the idea od spiritual gifts can be an exotic concept to a simple person like Huck, and while the widow explains that true gift is with helping people Huck still does not appreciate prayer; however, in the climax of the novel, Huck begins to question himself and pray in the concept of saving Jim escape or not. Notably, this produces the infamous line, “”you can’t pray a lie”” (Twain p.214), and with Huck concluding that he would rather go to hell and help Jim escape than do the “”correct”” thing. Henning continues by explaining that through Huck Finn, Twain “”states that society and religion are just as bad as hell””. In conclusion, Twain’s view of religion can be seen through the thought process of Huck, and how it affects the views and morals of the protagonist throughout the story with satire.

In the novel Adventures of Huckleberry Finn, Mark Twain’s morals and beliefs shine through his satire and questioning of what was “”normal”” during his time. Twain’s skepticism of religion and how hypocritical the individuals preaching it shines throughout the novel with characters such as Widow Douglas and Miss Watson, the Grangerfords, and the protagonist himself: Huckleberry Finn. Twain continues to show the acts of brutality and hypocrisy through the people in society, and he also shows the thought process of a simple boy trying to grasp the concept of Christianity as a whole. While the setting of the piece of writing was set in the 19th century, many concepts twain addressed about religion continues to be an issue today; So, no wonder the novel is still important nowadays.

The Religious Hypocrisy in Adventures of Huckleberry Finn. (2020, May 04). Retrieved from https://papersowl.com/examples/the-religious-hypocrisy-in-adventures-of-huckleberry-finn/