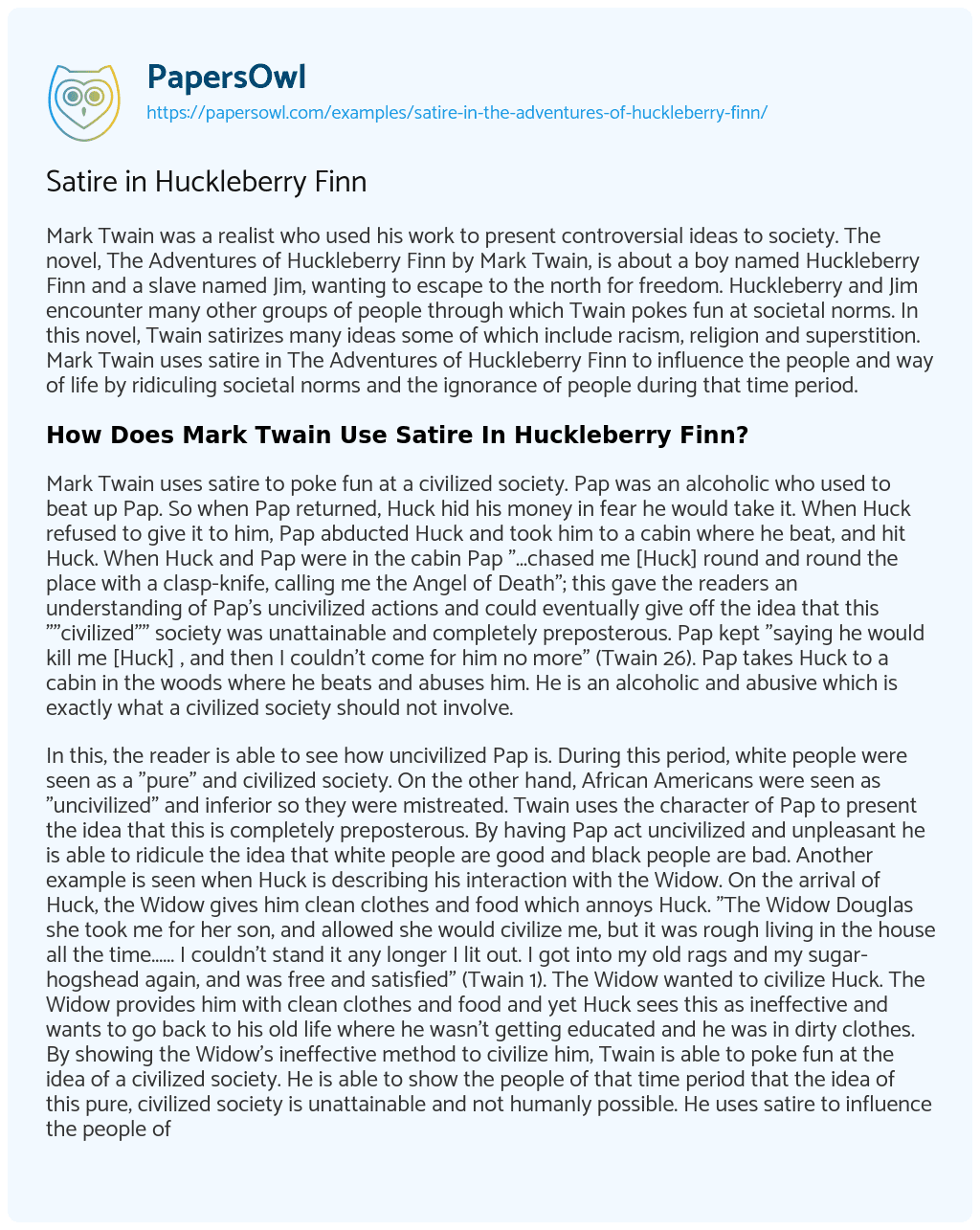 Mark Twain was a realist who used his work to present controversial ideas to society. The novel, The Adventures of Huckleberry Finn by Mark Twain, is about a boy named Huckleberry Finn and a slave named Jim, wanting to escape to the north for freedom. Huckleberry and Jim encounter many other groups of people through which Twain pokes fun at societal norms. In this novel, Twain satirizes many ideas some of which include racism, religion and superstition. Mark Twain uses satire in The Adventures of Huckleberry Finn to influence the people and way of life by ridiculing societal norms and the ignorance of people during that time period.

How Does Mark Twain Use Satire In Huckleberry Finn?

Mark Twain uses satire to poke fun at a civilized society. Pap was an alcoholic who used to beat up Pap. So when Pap returned, Huck hid his money in fear he would take it. When Huck refused to give it to him, Pap abducted Huck and took him to a cabin where he beat, and hit Huck. When Huck and Pap were in the cabin Pap “…chased me [Huck] round and round the place with a clasp-knife, calling me the Angel of Death”; this gave the readers an understanding of Pap’s uncivilized actions and could eventually give off the idea that this “”civilized”” society was unattainable and completely preposterous. Pap kept “saying he would kill me [Huck] , and then I couldn’t come for him no more” (Twain 26). Pap takes Huck to a cabin in the woods where he beats and abuses him. He is an alcoholic and abusive which is exactly what a civilized society should not involve.

In this, the reader is able to see how uncivilized Pap is. During this period, white people were seen as a “pure” and civilized society. On the other hand, African Americans were seen as “uncivilized” and inferior so they were mistreated. Twain uses the character of Pap to present the idea that this is completely preposterous. By having Pap act uncivilized and unpleasant he is able to ridicule the idea that white people are good and black people are bad. Another example is seen when Huck is describing his interaction with the Widow. On the arrival of Huck, the Widow gives him clean clothes and food which annoys Huck. “The Widow Douglas she took me for her son, and allowed she would civilize me, but it was rough living in the house all the time…… I couldn’t stand it any longer I lit out. I got into my old rags and my sugar-hogshead again, and was free and satisfied” (Twain 1). The Widow wanted to civilize Huck. The Widow provides him with clean clothes and food and yet Huck sees this as ineffective and wants to go back to his old life where he wasn’t getting educated and he was in dirty clothes. By showing the Widow’s ineffective method to civilize him, Twain is able to poke fun at the idea of a civilized society. He is able to show the people of that time period that the idea of this pure, civilized society is unattainable and not humanly possible. He uses satire to influence the people of the time period.

Another way Mark Twain uses satire is to poke fun at religion in Huckleberry Finn. He does this when he describes Huck’s thought process as the Widow is trying to teach him. “After supper she got out her book and learned me about Moses and the Bulrushes, and I was in a sweat to find out all about him; but by and by she let it out that Moses had been dead a considerable long time; so then I didn’t care no more about him, because I don’t take no stock in dead people” (Twain 2). The Widow tries to tell him about religion and he disregards the fact because he wants to ridicule society. Religion was a big part in many people’s lives. Twain uses satire to show the ineffectiveness of doing religious things and uses it to shows the people that religion was not supposed to be a focal point of people’s lives. Most of the characters in the book live in anything but a christian way of life. In one instance they use religion as a tool to get money. By including this, Twain was able to ridicule the way they implement religion in life.

“Then she told me all about the bad place, and I said I wished I was there. She got mad then, but I didn’t mean no harm. All I wanted was to go somewheres; all I wanted was a change, I warn’t particular.”” (Twain 3) The widow is describing heaven and hell to Huck who doesn’t really care for the matter. The Widow is shown as this overly – passionate Christian. She loves talking about the bible and likes to pray. By this humorous and flatout response shows how indifferent he is towards religion. He remains indifferent to the societal expectations. Twain uses this interaction show how ridiculous the concept of religion is.

Mark Twain includes superstition in Huckleberry Finn to ridicule it. Huck remembers something that happens as the Widow’s house. “”One morning I happened to turn over the salt-cellar at breakfast. I reached for some of it as quick as I could to throw over my left shoulder and keep off the bad luck, but Miss Watson was in ahead of me, and crossed me off”” (Twain 16) Superstition is a big part in society during this time period. He makes fun of superstition in this book to show how abursd the idea that certain actions will influence the good or bad luck you get. Nothing you do can change whether you get bad or good luck. Knowing this, Twain brings up superstition repeatedly to ridicule this fact. “”Pretty soon a spider went crawling up my shoulder, and I flipped it off and it lit in the candle; and before I could budge it was all shriveled up. I didn’t need anybody to tell me that that was an awful bad sign and would fetch me some bad luck”” (Twain 4) While at the Widow’s house, Huck was surrounded by someone who believed in religion and superstition. Twain wants to emphasize the stupidity of the things the people in that society believed in. They believed in many superstitious things which led to Twain using satire towards religion. Killing a spider does not necessarily mean that bad luck will come to you but in the context of that time period, many people believed that. He makes fun of that.

Mark Twain uses satire in The Adventures of Huckleberry Finn to influence the people and way of life by ridiculing societal norms. Mark Twain uses satire to poke fun at society, religion, and superstition. He does this by including Huck’s humorous and ridiculous thoughts to show how absurd the ideas that people believed in during that time period.

Satire in Huckleberry Finn. (2019, May 30). Retrieved from https://papersowl.com/examples/satire-in-the-adventures-of-huckleberry-finn/