Problem of Violence in Schools 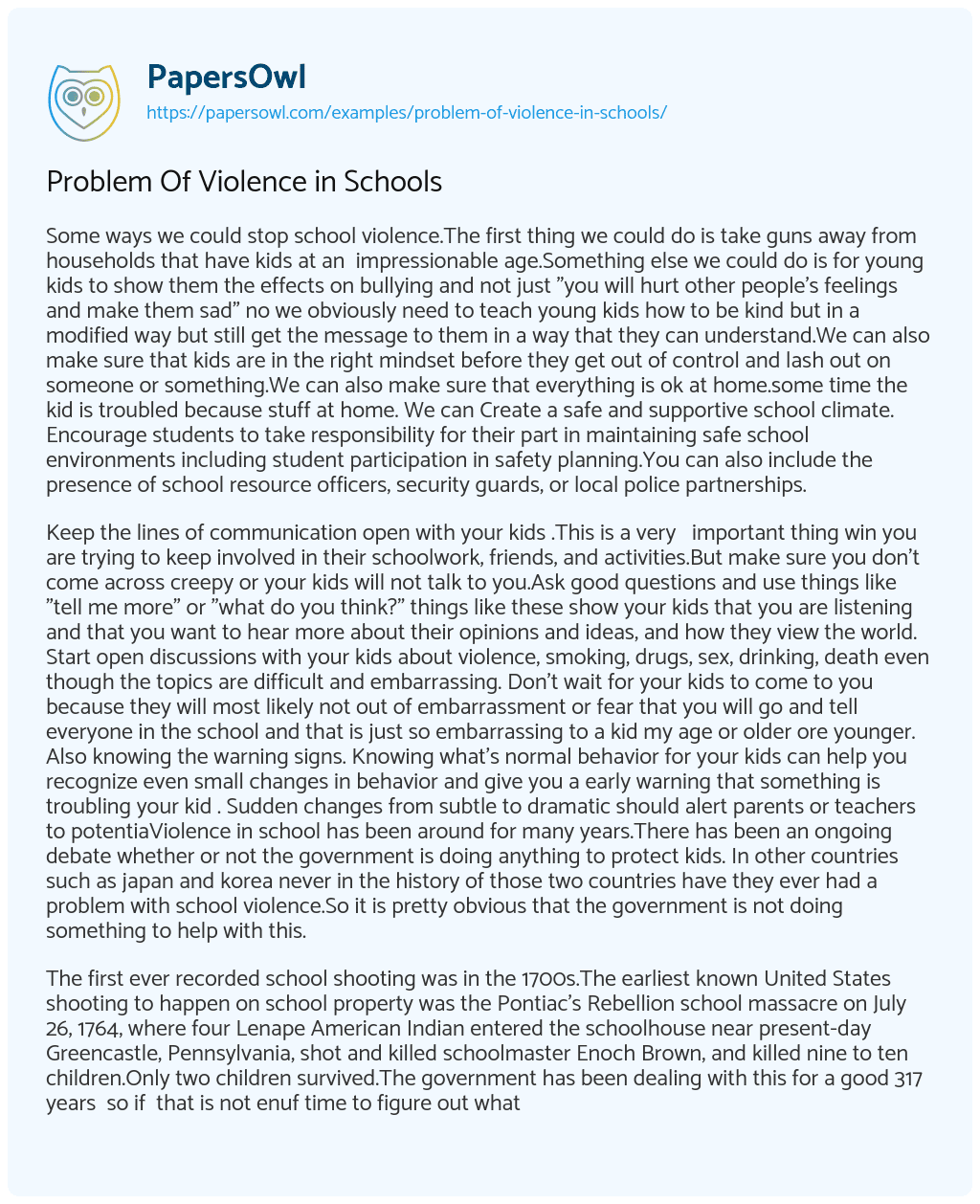 Some ways we could stop school violence.The first thing we could do is take guns away from households that have kids at an  impressionable age.Something else we could do is for young kids to show them the effects on bullying and not just “you will hurt other people’s feelings and make them sad” no we obviously need to teach young kids how to be kind but in a modified way but still get the message to them in a way that they can understand.We can also make sure that kids are in the right mindset before they get out of control and lash out on someone or something.We can also make sure that everything is ok at home.some time the kid is troubled because stuff at home. We can Create a safe and supportive school climate. Encourage students to take responsibility for their part in maintaining safe school environments including student participation in safety planning.You can also include the presence of school resource officers, security guards, or local police partnerships.

Keep the lines of communication open with your kids .This is a very   important thing win you are trying to keep involved in their schoolwork, friends, and activities.But make sure you don’t come across creepy or your kids will not talk to you.Ask good questions and use things like “tell me more” or “what do you think?” things like these show your kids that you are listening and that you want to hear more about their opinions and ideas, and how they view the world. Start open discussions with your kids about violence, smoking, drugs, sex, drinking, death even though the topics are difficult and embarrassing. Don’t wait for your kids to come to you because they will most likely not out of embarrassment or fear that you will go and tell everyone in the school and that is just so embarrassing to a kid my age or older ore younger. Also knowing the warning signs. Knowing what’s normal behavior for your kids can help you recognize even small changes in behavior and give you a early warning that something is troubling your kid . Sudden changes from subtle to dramatic should alert parents or teachers to potentiaViolence in school has been around for many years.There has been an ongoing debate whether or not the government is doing anything to protect kids. In other countries such as japan and korea never in the history of those two countries have they ever had a problem with school violence.So it is pretty obvious that the government is not doing something to help with this.

The first ever recorded school shooting was in the 1700s.The earliest known United States shooting to happen on school property was the Pontiac’s Rebellion school massacre on July 26, 1764, where four Lenape American Indian entered the schoolhouse near present-day Greencastle, Pennsylvania, shot and killed schoolmaster Enoch Brown, and killed nine to ten children.Only two children survived.The government has been dealing with this for a good 317 years  so if  that is not enuf time to figure out what to do then I don’t have enuf time for anything.I don’t understand why it takes them so long to  figure  out how to stop school shooting. Another example is Amanda Todd. Amanda Todd was just 15 win she  committed suicide on a live stream this was all do to cyberbullying. This is a good example of  Violence  because not only did she get bullied she got physically abused by a older boy and his girlfriend. She changed school there times because  a picture of hear floated around her first school because this guy she was “talking” to on facebook. He threatened her friends and family  if she did not send him nudes he will heart hear friends and family. So this is another form of school violence.The most current case of school violence is the trickum stabbing.

Student said he had “surprise” for teacher before stabbing her in the chest with a eight-inch butcher knife.the problem with this case is this kid had a history of violence. On reputed reports that he is threatened to kill other students and teachers.That boy should have been put on a watch list or something like that. If the government doesn’t do anything about it this will go on and on.And this will never change if we don’t do anything to stop the school violence. So here are l problems. These could include flight with friends slipping grades or quitting sports or clubs the kid  had previously enjoyed sleep disruptions eating problems uneasiness and lying, and physical complaints like stomach aches or headaches. Another warning sign is, if your kid starts to abuse animals. Showing extreme anger toward siblings is another sign. Losing interest in things doesn’t always mean that  your kid is having problems. It’s good to remember that all kids go through phases. Another thing you can do to prevent school violence is to  not be afraid to intervene. Parents need to step in and intervene when the child is showing behaviors that can harm others or themselves.Something else   that you can  do to not keep your kid on a tight leash. Don’t make them feel that they don’t have an option. Study show that kids who don’t have any freedom have an urge to lash out because win they finley get freedom the do water comes to mind,That might be drugs,unsafe sex,robbery and,fighting. Some other thing you can do is welcome new students and help them feel at home in your school. Introduce them to other students. Get to know at least one student unfamiliar to you each week.  Start a “peace pledge” campaign, in which students promise to settle disagreements without violence, to reject weapons, and to work toward a safe campus for all.

Try for 100 percent participation. Kids mistake power and respect.Trying to command the respect of their peers, they often resort to methods of abuse and violence.Children imitate what they see as “cool” behavior, often associated with action heroes and on-screen characters. Their young minds do not always see the boundaries between real and fake. In trying to emulate on-screen heroes, children can resort to violent acts.Children who have been victims of teasing sometimes resort to violence. They feel it gives them power and hides the negativity they face on a day to day.Don’t automatically think just because they’re different or “weird” they’re automatically going to be some psycho when they grow up.Everybody works differentl so one kid is not going to be like the other and the other isn’t going to be like another.If you make a kid or anyone else feel like they have to be like someone else they will start to get sad and or mad that they’re not good enough. And when they realize they’re not amounting to your standards they will start getting jealous of the person you are comparing them to. Jealousy is like a seed  the more more you water it the more more it grows. That’s why teachers don’t need favorites in the class and if they do don’t show it then kids will start to get mad and angry they don’t get the same attention that the other kid does. Jealousy becomes a deep-seated hatred for the person that they’re jealous of. So just be careful when you compare your kids to another child.Sometimes people don’t know what school violence is so they  can’t really teach about if they don’t know the definition is. School violence encompasses physical violence, including student-on-student fighting and corporal punishment; psychological violence, including verbal abuse; sexual violence, including rape and sexual harassment; many forms of bullying, including cyberbullying; and carrying weapons in school.

School violence encompasses physical violence, including student-on-student fighting and corporal punishment; psychological violence, including verbal abuse; sexual violence, including rape and sexual harassment; many forms of bullying, including cyberbullying; and carrying weapons in school. Some warning signs for kids to notice. Social withdrawal ,Excessive feelings of isolation and being alone ,Excessive feelings of rejection ,Being a victim of violence ,Feelings of being persecuted ,Low school interest and poor academic performance,Expression of violence in writings and drawings ,Uncontrolled anger ,Patterns of impulsive and chronic hitting, intimidating, and bullying behaviors ,History of discipline problems History of violent and aggressive behavior ,Intolerance for differences and prejudicial attitudes ,Use of drugs and alcohol ,Affiliation with gangs ,Inappropriate access to firearms ,Serious threats of violence

No single warning sign can predict that a dangerous act will occur. Rather, imminent warning signs usually are presented as a sequence of overt, serious, hostile behaviors or threats directed at peers, staff, or other individuals. Usually, imminent warning signs are evident to more than one staff member as well as to the child’s family. When warning signs indicate that danger is imminent, safety must always be the first and foremost consideration. Action must be taken immediately. Imminent warning signs may include Serious physical fighting with peers or family members.Severe destruction of property. Severe rage for seemingly minor reasons. Other self-injurious behaviors or threats of suicide. Threats of lethal violence. A detailed plan time, place, and method to harm or kill others, particularly if the child has a history of aggression or has attempted to carry out threats in the past. Possession and/or use of firearms and other weapons.

Problem Of Violence in Schools. (2019, Mar 02). Retrieved from https://papersowl.com/examples/problem-of-violence-in-schools/

Horror of Violence in Schools

Does Multi Media have an Impact on Violence in Schools

Issues of Violence in Schools