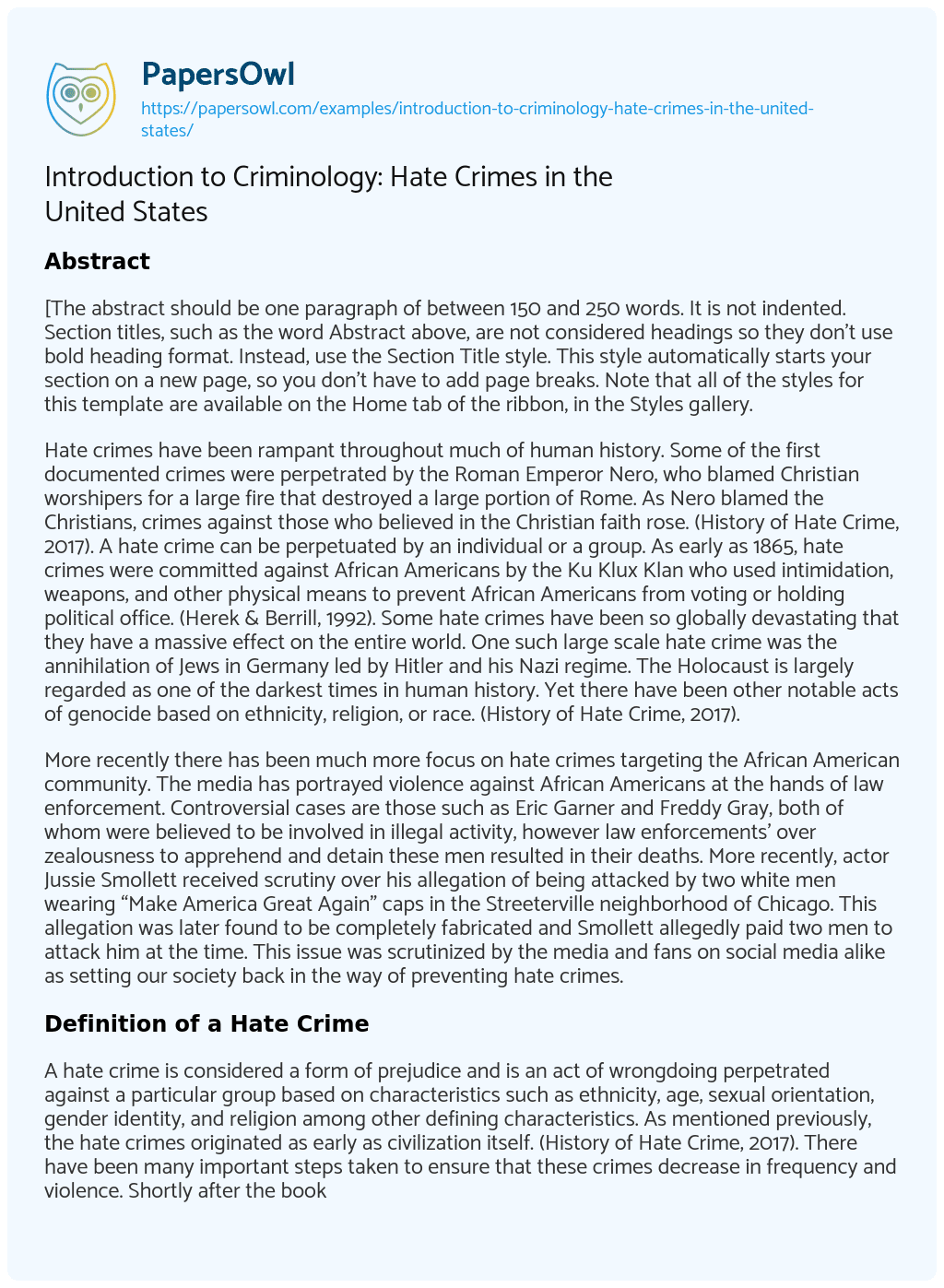 [The abstract should be one paragraph of between 150 and 250 words. It is not indented. Section titles, such as the word Abstract above, are not considered headings so they don’t use bold heading format. Instead, use the Section Title style. This style automatically starts your section on a new page, so you don’t have to add page breaks. Note that all of the styles for this template are available on the Home tab of the ribbon, in the Styles gallery.

Hate crimes have been rampant throughout much of human history. Some of the first documented crimes were perpetrated by the Roman Emperor Nero, who blamed Christian worshipers for a large fire that destroyed a large portion of Rome. As Nero blamed the Christians, crimes against those who believed in the Christian faith rose. (History of Hate Crime, 2017). A hate crime can be perpetuated by an individual or a group. As early as 1865, hate crimes were committed against African Americans by the Ku Klux Klan who used intimidation, weapons, and other physical means to prevent African Americans from voting or holding political office. (Herek & Berrill, 1992). Some hate crimes have been so globally devastating that they have a massive effect on the entire world. One such large scale hate crime was the annihilation of Jews in Germany led by Hitler and his Nazi regime. The Holocaust is largely regarded as one of the darkest times in human history. Yet there have been other notable acts of genocide based on ethnicity, religion, or race. (History of Hate Crime, 2017).

More recently there has been much more focus on hate crimes targeting the African American community. The media has portrayed violence against African Americans at the hands of law enforcement. Controversial cases are those such as Eric Garner and Freddy Gray, both of whom were believed to be involved in illegal activity, however law enforcements’ over zealousness to apprehend and detain these men resulted in their deaths. More recently, actor Jussie Smollett received scrutiny over his allegation of being attacked by two white men wearing “Make America Great Again” caps in the Streeterville neighborhood of Chicago. This allegation was later found to be completely fabricated and Smollett allegedly paid two men to attack him at the time. This issue was scrutinized by the media and fans on social media alike as setting our society back in the way of preventing hate crimes.

Definition of a Hate Crime

A hate crime is considered a form of prejudice and is an act of wrongdoing perpetrated against a particular group based on characteristics such as ethnicity, age, sexual orientation, gender identity, and religion among other defining characteristics. As mentioned previously, the hate crimes originated as early as civilization itself. (History of Hate Crime, 2017). There have been many important steps taken to ensure that these crimes decrease in frequency and violence. Shortly after the book Making A Hate Crime: From Social Movement to Law Enforcement was published in 2001, the authors note that there were two very important occurrences that propelled us to where we are today. First, the first case of a hate crime to be federal prosecuted was heard in the United States. Darrell David Rice was charged federally with a hate crime by the United States Attorney General at the time, John D Ashcroft, who had previously held a press conference to announce this landmark case. Ashcroft was quoted as saying that hate crimes are counter to American beliefs. Second, the rise in anti-Muslim attacks following the September 11, 2001 event now known simply as “9/11”. (Jenness & Grattet, 2001). In addition to these incidences, there have been many federal laws and statutes that have been established in an effort to eliminate hate crimes against one group or another.

The first federal hate crimes statute was passed by Congress and signed into law by then President Lyndon B. Johnson in 1968. This law made it illegal to “use, or threaten to use, force to willingly interfere with any person because of race, color, religion, or national origin” or to willingly and knowingly assist in such an act. These protections were expanded upon in 1988 to protect individuals on the basis of “familial status and disability”. In 1990, the Americans with Disabilities Act was adopted to further that definition to include that those with disabilities could not legally be discriminated against. Congress passed the Church Arson Prevention Act in 1996. This act it was considered an illegal hate crime to “deface, damage, or destroy” religious property or to interfere with a person’s right to worship as they choose as covered by the First Amendment. Under this act, it is also a hate crime to deface, damage, or destroy religious property due to the race, color, or ethnicity of worshippers. (Hate Crime Laws, 2019).

During his first presidential term, Barack Obama, with the support of Congress, signed into law the Matthew Shepard and James Byrd Jr. Hate Crime Prevention Act, named for the victims of deadly hate crimes. This act expanded previous federal hate crime definitions by protecting individuals based on gender, disability, gender identity, and sexual orientation. It also removed jurisdictional hindrances as it pertained to race and religion-motivated violence. (Hate Crime Laws, 2019).

James Byrd Jr. was a black man walking home from his niece’s bridal shower on the evening of June 6, 1998 when he was picked up by three white men in a pick-up truck. These men did not give any indications that they wished ill toward him, sharing beer and cigarettes until they stopped in a remote area in which they beat him. After the brutal beating, the three men tied Byrd to the back of the pick-up truck by his feet and dragged him for two and a half miles until he was decapitated. The men then left his body near a neighborhood, predominantly black, church which caused police to treat this as a hate crime. (Petersen, 2011).

Just a few months after this horrific event, Matthew Shepard met Russell Henderson and Aaron McKinney at a local college bar near the university he attended. After leaving together, the two killers took Matthew to the outskirts of their little town takings his wallet and shoes. They tied him to a fence where they beat him mercilessly. Just eighteen hours after the brutal beating, a mountain biker found Matthew Shepard who was then air lifted to a nearby hospital to be treated for his injuries. He remained in a coma for five days before passing away. (Petersen, 2011).

These examples were prosecuted as hate crimes because the motive for carrying out these vicious atrocities was purely based on race and sexual orientation respectively. Hate crimes, as previously defined, are violent crimes carried out based on the victim’s race, gender, ethnicity, gender identity, sexual orientation, or another defining characteristic. “This type of violence has taken a variety of forms, from symbolic to fatal assaults on both individuals and entire groups of people.” Unfortunately, these crimes are anything but new in the United States and globally. From slaughters of Native American people, to the Holocaust, to current crimes such as the ones detailed above, our society has been plagued with hate crimes. (Jenness & Grattet, 2001).

Hate crimes have been an unfortunate part of human history since the dawning of civilization. There has been much legislation since the 1960’s regarding what defines a hate crime as well as how these crimes should be prosecuted. A hate crime is a violent crime in which the main motive to commit said act is due to a person’s gender, sexual orientation, race, religion, or another defining characteristic. With each new law pertaining to hate crimes, there has been expansion on the meaning of a hate crime and who and what is protected under each act. The most recent piece of legislation came under President Obama, named the Matthew Shepard and James Byrd Jr. Act, or more commonly referred to as the Matthew Shepard Act. This act was signed into legislation after two men were brutally murdered just months apart, one based on his race, the other based on his sexual orientation. These landmark cases have forced our society to strive further to eliminate such tragedies.

Introduction to Criminology: Hate Crimes in the United States. (2021, May 14). Retrieved from https://papersowl.com/examples/introduction-to-criminology-hate-crimes-in-the-united-states/