Understanding the Harm of Hate Crime 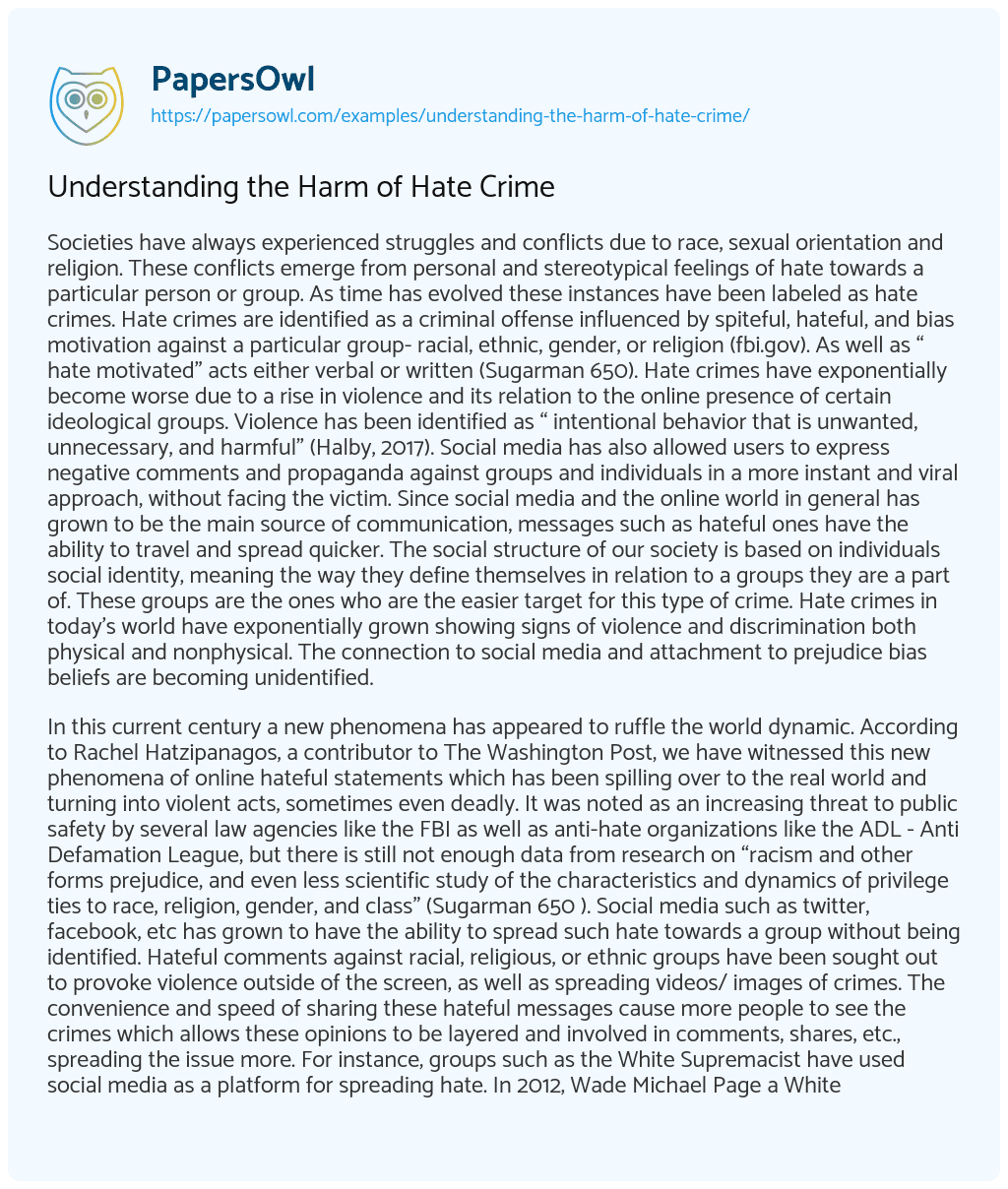 Societies have always experienced struggles and conflicts due to race, sexual orientation and religion. These conflicts emerge from personal and stereotypical feelings of hate towards a particular person or group. As time has evolved these instances have been labeled as hate crimes. Hate crimes are identified as a criminal offense influenced by spiteful, hateful, and bias motivation against a particular group- racial, ethnic, gender, or religion (fbi.gov). As well as “ hate motivated” acts either verbal or written (Sugarman 650). Hate crimes have exponentially become worse due to a rise in violence and its relation to the online presence of certain ideological groups. Violence has been identified as “ intentional behavior that is unwanted, unnecessary, and harmful” (Halby, 2017). Social media has also allowed users to express negative comments and propaganda against groups and individuals in a more instant and viral approach, without facing the victim. Since social media and the online world in general has grown to be the main source of communication, messages such as hateful ones have the ability to travel and spread quicker. The social structure of our society is based on individuals social identity, meaning the way they define themselves in relation to a groups they are a part of. These groups are the ones who are the easier target for this type of crime. Hate crimes in today’s world have exponentially grown showing signs of violence and discrimination both physical and nonphysical. The connection to social media and attachment to prejudice bias beliefs are becoming unidentified.

In this current century a new phenomena has appeared to ruffle the world dynamic. According to Rachel Hatzipanagos, a contributor to The Washington Post, we have witnessed this new phenomena of online hateful statements which has been spilling over to the real world and turning into violent acts, sometimes even deadly. It was noted as an increasing threat to public safety by several law agencies like the FBI as well as anti-hate organizations like the ADL – Anti Defamation League, but there is still not enough data from research on “racism and other forms prejudice, and even less scientific study of the characteristics and dynamics of privilege ties to race, religion, gender, and class” (Sugarman 650 ). Social media such as twitter, facebook, etc has grown to have the ability to spread such hate towards a group without being identified. Hateful comments against racial, religious, or ethnic groups have been sought out to provoke violence outside of the screen, as well as spreading videos/ images of crimes. The convenience and speed of sharing these hateful messages cause more people to see the crimes which allows these opinions to be layered and involved in comments, shares, etc., spreading the issue more. For instance, groups such as the White Supremacist have used social media as a platform for spreading hate. In 2012, Wade Michael Page a White Supremacist had murdered six people in a temple and with further investigation, online hate posts by Wade were found. In the past there has been hate movements but as of now hateful groups such as White Supremacist have been able to deliver messages in a “never ending stream of hateful propaganda to the masses” ( Hatzipanagos). Another issue is bias-based bullying to youth especially on social media. According to the National Crime Victimization Survey School Crime data, showed that the youth have commonly experienced bias based bullying because of one of their identities or personal characteristic (Sugarman 652).

Hate sentiments have been directly linked to violence and discrimination for centuries and continue to grow worldwide and in recent years in the US. As social media is a great influence on the start of these crimes many are still occuring outside the online world. Recently it has been shown that a spread of these hate crimes has affected the majority of the US and Europe. For example, research from The United States Department of Justice has shown that there was 6,121 single bias hate crime reports involving 20.8% religious bias, 19.6% sexual orientation/gender identity, and 57% racial/ ethnic groups (Sugarman 650). This is an alarming development that requires attention to education, prevention and judicial systems.

Discrimination and hate crimes have progressed more concerns and consequences to our society. First, many of the crimes go unreported or unidentified due to “fears of negative repercussions” or that could it lead to ineffective justice (Sugarman 650). Many who are responsible for these hateful crimes typically are hidden especially on social media where usernames are difficult to track and receive the appropriate consequences. In addition, the victims of these crimes have to face the cruel discriminations due to a part of their social identity starting at a young age causing results of lower self esteem and feeling of ashamness as they are seen as a target. To continue, members of social groups can also use hate crimes to show entitlement towards others causing mistrust between groups. Some individuals might also experience the disadvantage feeling of “unfortunate luck to be born into the wrong social class, race, religion or gender” ( Sugarman 651) instead of feeling proudful of their identity.

In conclusion, hate crimes towards any social group or individual can be either verbal, written or physical but all are harmful.

Understanding the Harm of Hate Crime. (2020, Jul 02). Retrieved from https://papersowl.com/examples/understanding-the-harm-of-hate-crime/