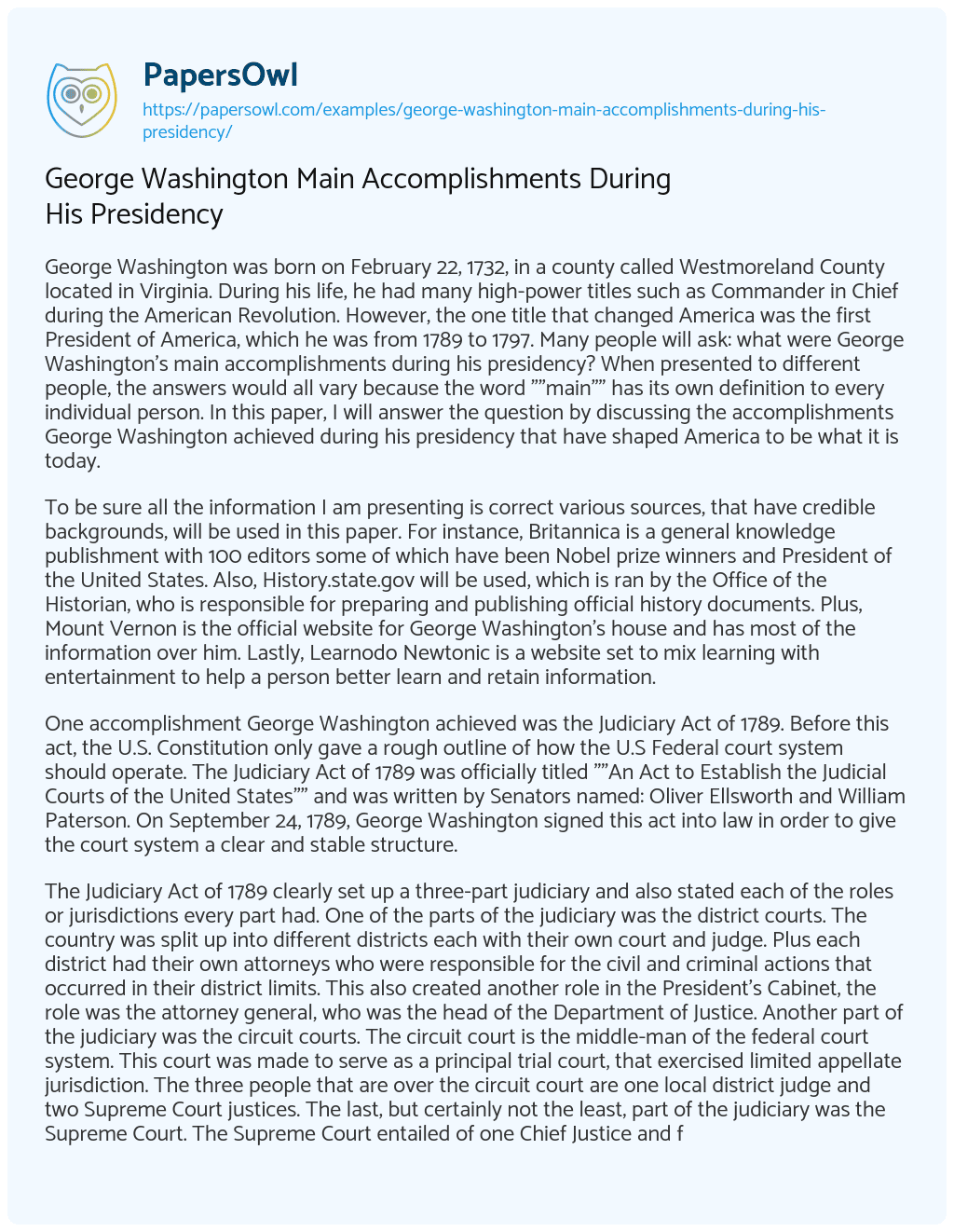 George Washington was born on February 22, 1732, in a county called Westmoreland County located in Virginia. During his life, he had many high-power titles such as Commander in Chief during the American Revolution. However, the one title that changed America was the first President of America, which he was from 1789 to 1797. Many people will ask: what were George Washington’s main accomplishments during his presidency? When presented to different people, the answers would all vary because the word “”main”” has its own definition to every individual person. In this paper, I will answer the question by discussing the accomplishments George Washington achieved during his presidency that have shaped America to be what it is today.

To be sure all the information I am presenting is correct various sources, that have credible backgrounds, will be used in this paper. For instance, Britannica is a general knowledge publishment with 100 editors some of which have been Nobel prize winners and President of the United States. Also, History.state.gov will be used, which is ran by the Office of the Historian, who is responsible for preparing and publishing official history documents. Plus, Mount Vernon is the official website for George Washington’s house and has most of the information over him. Lastly, Learnodo Newtonic is a website set to mix learning with entertainment to help a person better learn and retain information.

One accomplishment George Washington achieved was the Judiciary Act of 1789. Before this act, the U.S. Constitution only gave a rough outline of how the U.S Federal court system should operate. The Judiciary Act of 1789 was officially titled “”An Act to Establish the Judicial Courts of the United States”” and was written by Senators named: Oliver Ellsworth and William Paterson. On September 24, 1789, George Washington signed this act into law in order to give the court system a clear and stable structure.

The Judiciary Act of 1789 clearly set up a three-part judiciary and also stated each of the roles or jurisdictions every part had. One of the parts of the judiciary was the district courts. The country was split up into different districts each with their own court and judge. Plus each district had their own attorneys who were responsible for the civil and criminal actions that occurred in their district limits. This also created another role in the President’s Cabinet, the role was the attorney general, who was the head of the Department of Justice. Another part of the judiciary was the circuit courts. The circuit court is the middle-man of the federal court system. This court was made to serve as a principal trial court, that exercised limited appellate jurisdiction. The three people that are over the circuit court are one local district judge and two Supreme Court justices. The last, but certainly not the least, part of the judiciary was the Supreme Court. The Supreme Court entailed of one Chief Justice and five other associate justices. The role of the Supreme Court was to settle any disagreements between states and to review the final judgments that were made by the highest court in any of the states. The act also gave the Supreme Court its ultimate power over all courts by stating the Supreme Court’s decisions were final.

Another major accomplishment of George Washington during his presidency was the signing of Jay’s Treaty. After the American Revolution, there were many issues that were left unresolved between the British and America. One issue was the British exports continued to flood the U.S markets, however, the British did not allow America to send exports by setting trade restrictions and tariffs. Also, the British still occupied forts up north even after they agreed to abandon the forts. Lastly the British were impressing American sailor and seizing naval ships that were bound to enemy ports. The main purpose of Jay’s Treaty was to not only settle unresolved issues that the British and America had but to give America neutrality in the war between the French and the British that had recently arisen.

The war between the French and the British happened after the French Revolution. The war did stay across the sea, in fact, it started to divide the Americans into two different sides. One side was those who supported the French, the main supporter being Tomas Jefferson, and the other side being those who supported the British, the main supporter being Alexander Hamilton. George Washington, who was looking out for the wellness of his country, decided to send John Jay to negotiate with the British. John Jay turned to Alexander Hamilton for guidance on how to deal with the British. Jay decided his best tactic was to threaten that America was going to side with the Danish and Sweden, who would defend their neutrality and would resist by arms. However Alexander Hamilton felt that this would harm America’s relationship with the British rather than help, so he decided to tell British officials that America did not intend to side with the Danish and Sweden. This left John Jay without the upper hand and made the treaty being signed more difficult for America.

Despite all difficulty, John Jay got the treaty signed. He even got it to resolve a few of the issues mentioned before, but most importantly it clearly stated America’s neutrality in the war occurring between the French and the British. Even though the citizens of America disagreed with the treaty, George Washington signed the treaty into effect on June 24, 1975.

The last accomplishment of George Washington this paper will discuss is how he settled the Whiskey Rebellion. The Revolutionary War gave America its freedom but also gave America its extensive debt. Alexander Hamilton was in favor of to tax the colonists to lessen the debt. One of his first proposed taxes was to tax all distilled drinks, including whiskey. Once those who resided in western Pennsylvania heard of this tax, they automatically started to voice their disdain for it and refused to pay for it. They felt as though the government was trying to target those who profit off of grains such as corn, rye, and grain. This is because the easiest way to ship their product up to the east, with little to no damage, was to distill their crops. Without the ability to ship their crops their profit would dramatically drop.

At first George Washington set to come up with a peaceful solution by issuing a national proclamation. Instead of the protestors surrendering, they became violent. One of the ways rebels protested was by setting the regional tax collectors house on fire. This was the last straw for George Washington and he decided the federal government needed to execute their power over the people. He did this by organizing a militia of 12,950 men and lead them towards Western Pennsylvania. George Washington had met his desired effect, by the time he had reached Pennsylvania all of the rebels had quit and essentially ended the Whiskey Rebellion.

Even though George Washington was the President of the U.S 221 years ago, he has influenced how America has become. My thesis of the accomplishments George Washington achieved during his presidency that have shaped America to be what it is today is correct because many of the outcomes from his accomplishments are still apparent today. For instance, we still have a three-part court system, with each court having their own purpose. Also, all of the decisions made by the Supreme Court are final. Jay’s Treaty was an example of America having neutrality between certain powers and has helped lead the way to the NATO agreement that we have today. Lastly, the Whiskey Rebellion helped reveal how the federal government has power over the people.