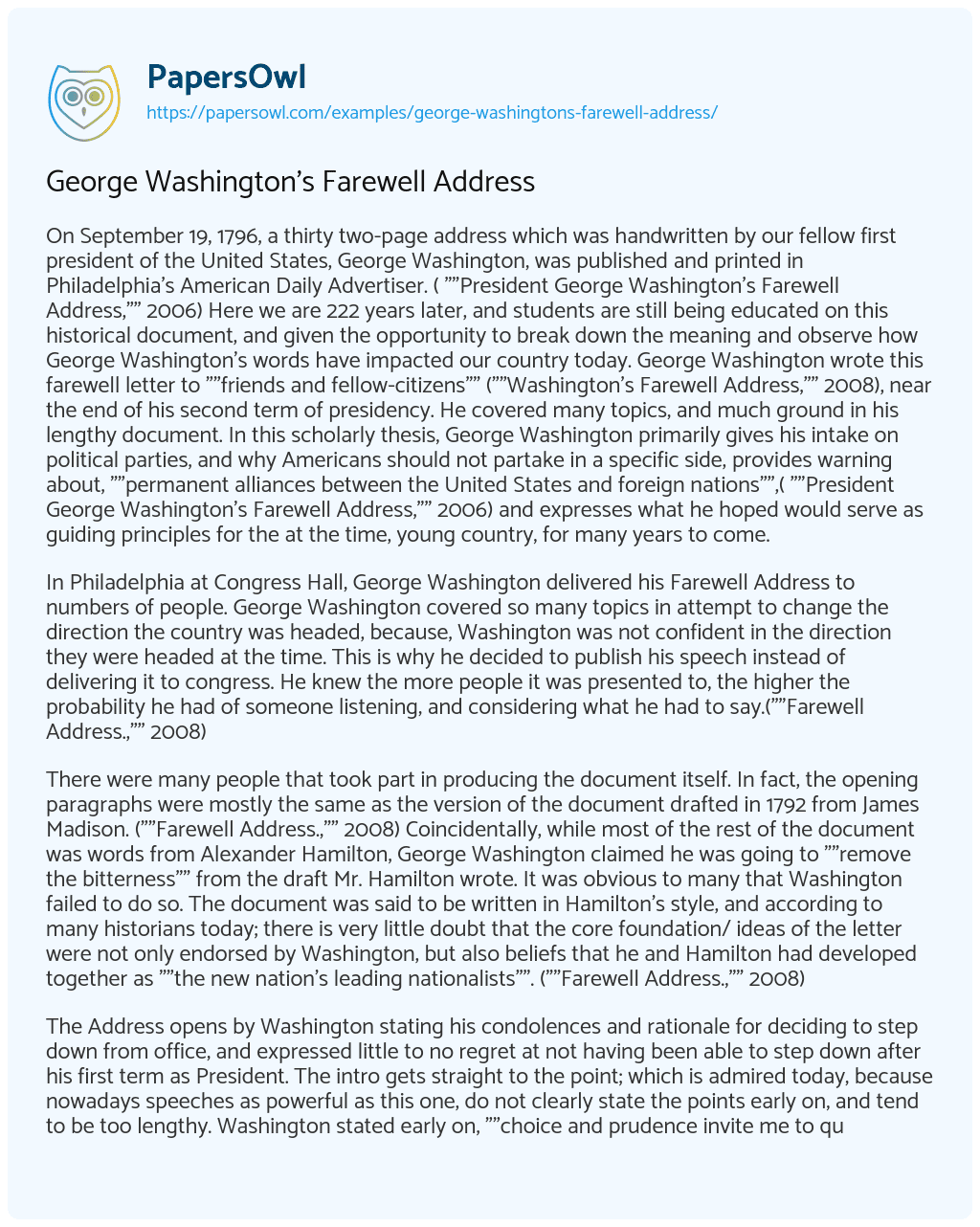 In Philadelphia at Congress Hall, George Washington delivered his Farewell Address to numbers of people. George Washington covered so many topics in attempt to change the direction the country was headed, because, Washington was not confident in the direction they were headed at the time. This is why he decided to publish his speech instead of delivering it to congress. He knew the more people it was presented to, the higher the probability he had of someone listening, and considering what he had to say.(“”Farewell Address.,”” 2008)

There were many people that took part in producing the document itself. In fact, the opening paragraphs were mostly the same as the version of the document drafted in 1792 from James Madison. (“”Farewell Address.,”” 2008) Coincidentally, while most of the rest of the document was words from Alexander Hamilton, George Washington claimed he was going to “”remove the bitterness”” from the draft Mr. Hamilton wrote. It was obvious to many that Washington failed to do so. The document was said to be written in Hamilton’s style, and according to many historians today; there is very little doubt that the core foundation/ ideas of the letter were not only endorsed by Washington, but also beliefs that he and Hamilton had developed together as “”the new nation’s leading nationalists””. (“”Farewell Address.,”” 2008)

The Address opens by Washington stating his condolences and rationale for deciding to step down from office, and expressed little to no regret at not having been able to step down after his first term as President. The intro gets straight to the point; which is admired today, because nowadays speeches as powerful as this one, do not clearly state the points early on, and tend to be too lengthy. Washington stated early on, “”choice and prudence invite me to quit the political scene, patriotism does not forbid it.”” (“”Washington’s Farewell Address,”” 2008)He was getting overwhelmed and frustrated about the demands of living so publicly. This became increasingly worse during his second term. Washington was ready to move back to Mt. Vernon, and was looking forward to being able to live a more private life of his own.

In Washington’s second point, he thanks the American-people for the opportunity to serve their country. After making it clear that his decision was what was best for the country, he tells the audience that they needed to remain united despite the differences between them that could spread them apart.(“”Farewell Address.,”” 2008) The next main point that was brought up for a large portion of the letter was a lengthy explanation on what he hoped would be a core foundation, or building blocks for the United States after his term, and would continue to guide the nation in the future. Washington stressed that the “”Natural Union”” formed the bare foundation of “”collective and individual happiness”” (“”Washington’s Farewell Address,”” 2008) for the citizens of the United States. He explains the name “”American””, and says that you must show pride in patriotism to be an “”American.””

George Washington’s following point in his farewell address addresses a “”warning”” you could say, about the effects and dangers of showing spirit or joining a specific political party. He believed that this would be incredibly unhealthy for our society if they showed political diversity. (“”Washington’s Farewell Address,”” 2008)

The fifth main point stated in the letter, was Washington’s warning to steer clear of permanent alliances to foreign nations. He says that foreign nations can not be trusted to do anything other than to do the things they would benefit from, or do the things that were considered to be in their favor. Washington suggests extending foreign “”commercial relations”” which would be mutually beneficial, and also keeps a distance in any sort of political connection.

This document is important to me because it set the foundation and the tone for our country and future presidents. Presidency would be incredibly different if it wasn’t for the foundation that George Washington laid for us. A point in this document that sticks out to me the most is about the political parties. Washington seemed to want to steer clear of factions or any sort of diverse groups in society. Today, especially with all of the elections going on right now, I can not imagine what our country would be like if we remained following George Washington’s words about not taking sides to a specific political party. So many citizens of the United States nowadays are extremely strong in their political views and are not afraid to voice their opinion.( I wonder what George Washington would have to say about that…? ) It is quite obvious that George Washington’s words have had a huge impact on our country today. Every year a U.S. Senate is asked to recite Mr. Washington’s wise words in front of thousands of people, and it is televised for the entire country to witness.

George Washington’s farewell address will forever be admired, viewed, and studied by so many. We are now at our 45th president, and still refer to Washington’s published speech from 222 years ago. In his document, Washington primarily gives his intake on political parties, and why Americans should not partake in a specific side, provides warning about permanent alliances between the United States and foreign nations, and expresses what he hoped would serve as guiding principles for at the time, young country, for many years to come. George Washington has definitely made a mark on the United States of America. This is still proven to be true 222 years later. As a citizen, I can proudly say George Washington’s words have impacted our country in such a positive way, and the foundation he laid for us is so strong, and we have benefited so greatly.

George Washington’s Military Experience and how it Benefited the Nation