Western Constitutionalism and his Influence in the USA 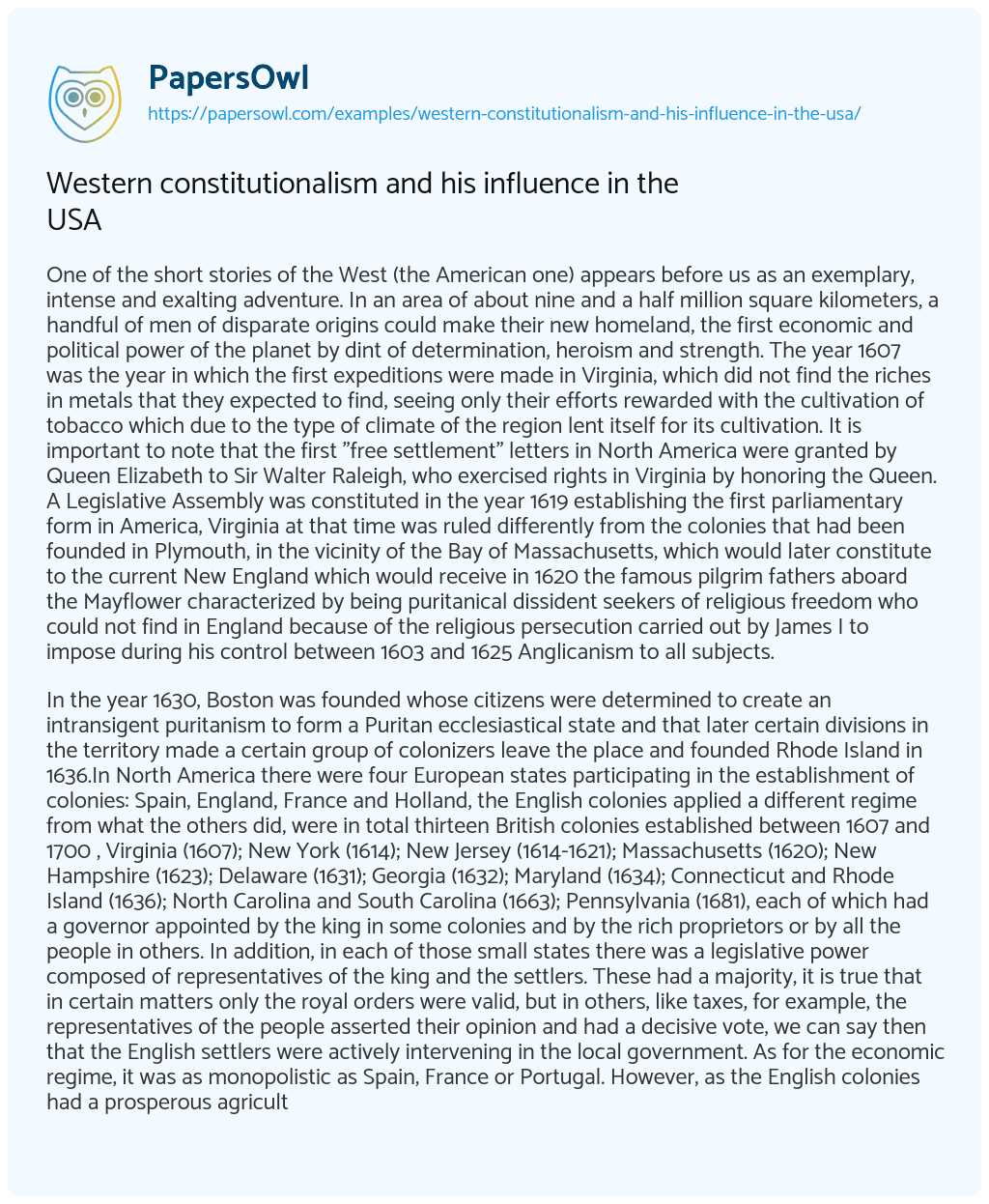 One of the short stories of the West (the American one) appears before us as an exemplary, intense and exalting adventure. In an area of about nine and a half million square kilometers, a handful of men of disparate origins could make their new homeland, the first economic and political power of the planet by dint of determination, heroism and strength. The year 1607 was the year in which the first expeditions were made in Virginia, which did not find the riches in metals that they expected to find, seeing only their efforts rewarded with the cultivation of tobacco which due to the type of climate of the region lent itself for its cultivation. It is important to note that the first “free settlement” letters in North America were granted by Queen Elizabeth to Sir Walter Raleigh, who exercised rights in Virginia by honoring the Queen. A Legislative Assembly was constituted in the year 1619 establishing the first parliamentary form in America, Virginia at that time was ruled differently from the colonies that had been founded in Plymouth, in the vicinity of the Bay of Massachusetts, which would later constitute to the current New England which would receive in 1620 the famous pilgrim fathers aboard the Mayflower characterized by being puritanical dissident seekers of religious freedom who could not find in England because of the religious persecution carried out by James I to impose during his control between 1603 and 1625 Anglicanism to all subjects.

In the year 1630, Boston was founded whose citizens were determined to create an intransigent puritanism to form a Puritan ecclesiastical state and that later certain divisions in the territory made a certain group of colonizers leave the place and founded Rhode Island in 1636.In North America there were four European states participating in the establishment of colonies: Spain, England, France and Holland, the English colonies applied a different regime from what the others did, were in total thirteen British colonies established between 1607 and 1700 , Virginia (1607); New York (1614); New Jersey (1614-1621); Massachusetts (1620); New Hampshire (1623); Delaware (1631); Georgia (1632); Maryland (1634); Connecticut and Rhode Island (1636); North Carolina and South Carolina (1663); Pennsylvania (1681), each of which had a governor appointed by the king in some colonies and by the rich proprietors or by all the people in others. In addition, in each of those small states there was a legislative power composed of representatives of the king and the settlers. These had a majority, it is true that in certain matters only the royal orders were valid, but in others, like taxes, for example, the representatives of the people asserted their opinion and had a decisive vote, we can say then that the English settlers were actively intervening in the local government. As for the economic regime, it was as monopolistic as Spain, France or Portugal. However, as the English colonies had a prosperous agriculture, they traded very well with the metropolis, which reserved manufacturing exclusivity. Each one of the colonies acquired great individuality, because the inhabitants voted their own taxes and defended with ardor the liberties that would have corresponded with them in the metropolis. This was how in the mid-eighteenth century, these colonies were, in terms of the progress of their internal affairs, virtually independent of England.

After the Seven Years’ War, the British government decided to organize its American domains in the form of an empire beginning with Canada, a country that agreed without resistance, but as the Americans were relieved of the constant threat from France, they offered increasing resistance to the pretensions of the metropolis, and England due to the high costs borne by the war needed money to meet their expenses. The Tory Ministry George Grenville, under the reign of George III was the one who took the initiative to increase tax burdens.

Among the measures taken we find:
Customs tax on sugar with molasses that entered the colonies. (1764).
Stamp Act that provided for the use of stamped paper in all legal documents. (1765) Establishment of a list of goods that were to be purchased in Great Britain.

For these reasons the Southern Colonies contracted high debts in England, exported practically tobacco only as they imported floats, wigs, slaves and furniture among others. At North something similar happened, but the contraband managed to cover the real losses, but the conjunction of multiple economic, political and social factors caused the Americans to act, thus abandoning the passivity that they had until then forming groups that were named that of “Sons of Liberty” which persecuted and attacked all those who continued to acquire English merchandise. On March 5, 1770, the famous “Boston Massacre” took place, where a confrontation took place between English troops and a group of civilians, in which we must repeat the words of a patriotic leader such as Samuel Adams: “It is time that the people of our country declare explicitly if this is to be of free men or slaves (Wells, 2009). In 1773 a group of patriots disguised as Indians attacked three ships laden with tea that were anchored in the port of Boston, where they opened the boxes with knives and threw the tea into the sea, this provoked the reaction of Jorge III, who gave strict orders to punish the rebels, but the patriotic reaction was immediate highlighting the following events: On September 5, 1774, the “First Continental Congress” met in Philadelphia, whose representatives included Samuel and John Adams, John Jay, Patrick Henry, and appointed the first revolutionary government. This was a tumultuous assembly without a well-defined policy, but the “Second Congress”, also assembled in Philadelphia in May 1775, became an already deliberative assembly, whose audacious decisions (appointment of Washington as commanding general of the liberating forces) to the country its first national basest the Battle of Lexington (1775) the colonists rose up in arms bearing a royal army, then assembled a new Congress in Philadelphia of which we spoke in the previous point and appointed George Washington as political and military chief. On March 17, 1776, the English must evacuate by sea the city of Boston after the attacks provoked by George Washington. On July 5, 1776 Sir William Howe landed with his troops on Staten Island and New York fell into British hands. Successive English victories were happening.

2. The Declaration of Independence

During the early 1776 Great Britain sent well-equipped troops to America to repress the rebellion, and then the Americans played the whole for everything. In the Congress of Philadelphia, on July 4, 1776, they solemnly declared the independence of the United States of America. The representatives of the new Republic immediately began negotiations in France to try to obtain the support against England, but the Gallic leaders remained reluctant especially because of the negative course of the war operations. Benjamin Franklin oversaw this mission in Paris. We must also emphasize that the act proclaimed principles of freedom and equality, in which an 18th century French influence was evident: The Enlightenment had transcended and spread widely throughout the Americas. The struggle for independence sequence of events will produce a change of scenery: At the end of 1776 Washington stopped the English advance in New Jersey. In 1778 the French intervention took place, giving a turn to the situation until then unfavorable for the American patriots. In 1780, France sent expeditionary troops under the command of General Rochambeau, and this army, combined with that of Washington, which operated near New York, as La Fayette, which was in the South, plus the troops French arrivals from the Antilles, and thanks to the dominion of the sea, managed to surround the British Army of the South, led by Cornwallis, and make him capitulate on October 19, 1781 in Yorktown. The Peace of Versailles, adjusted without excessive resentment among the belligerents and unfavorable to the countries that had helped the American cause, was signed on September 3, 1783. Carlos III of Spain got Britain to give him back Menorca and Florida, but he had to renounce his claims on Gibraltar.

In the year 1782 Alexander Hamilton published a series of articles defending the thesis of creation of a strong central government, he supposed that the meeting of a convention of delegates in Philadelphia for the dictatorship of the new measures that were believed necessary to realize the Constitution of the government. On May 25, 1787, the convention that Hamilton had favored met as an immediate consequence of the appointment of a Federal Government under the presidency of Washington. “The Constitution was a compromise between radical Democrats and conservative Republicans, nobody dared to speak of monarchy, but Hamilton, soul of the Constituent Assembly did think of such a form of government. Within some skills that the Constitution grants to the President, we find: The President selects his ministers and senior State officials. He has legislative initiative. Elected for four years in dual re-election elections. It has budgetary initiative. He is the Highest Chief of the Armed forces. At the convention attended by fifty-five delegates, among which we must highlight Benjamin Franklin, George Washington, Robert Morris, James Wilson, James Madison, Alexander Hamilton and Charles Pickney, it is necessary to highlight the contribution of Madison with the writing of the “Plan Virginia” where he proposed the creation of an executive power, a legislature with two chambers and a judicial power that was entrusted to the Highest Court (Rutland, Robert A., 1977). The success of this Constitution, which has only undergone slight modifications and amendments since its promulgation, has caused the admiration of the entire world and has served as a model for many countries. Finally, we must mention John Locke as the father of Western constitutionalism, his influence in the United States of America, for one of whose states he even projected an outline of the constitution, is manifest. The statement of freedom, the text of which is attributed to Jefferson, is written in terms that remind us almost literally of Locke’s work. The Philadelphia Constitution of 1787 is also a recipient of its influence. It is necessary to conclude by commenting that in 1799 with the death of George Washington marks the end of a stage in American history, but will begin a new one with the presidency of Thomas Jefferson (1743-1826) where he will lean towards the preservation of the autonomy of the states, and among its principles we must highlight:
The limited government.
The rights of man.
Natural equality

Western constitutionalism and his influence in the USA. (2020, Feb 19). Retrieved from https://papersowl.com/examples/western-constitutionalism-and-his-influence-in-the-usa/

The most Significant Event in American History

A War of the Thirteen Colonies against Great Britain