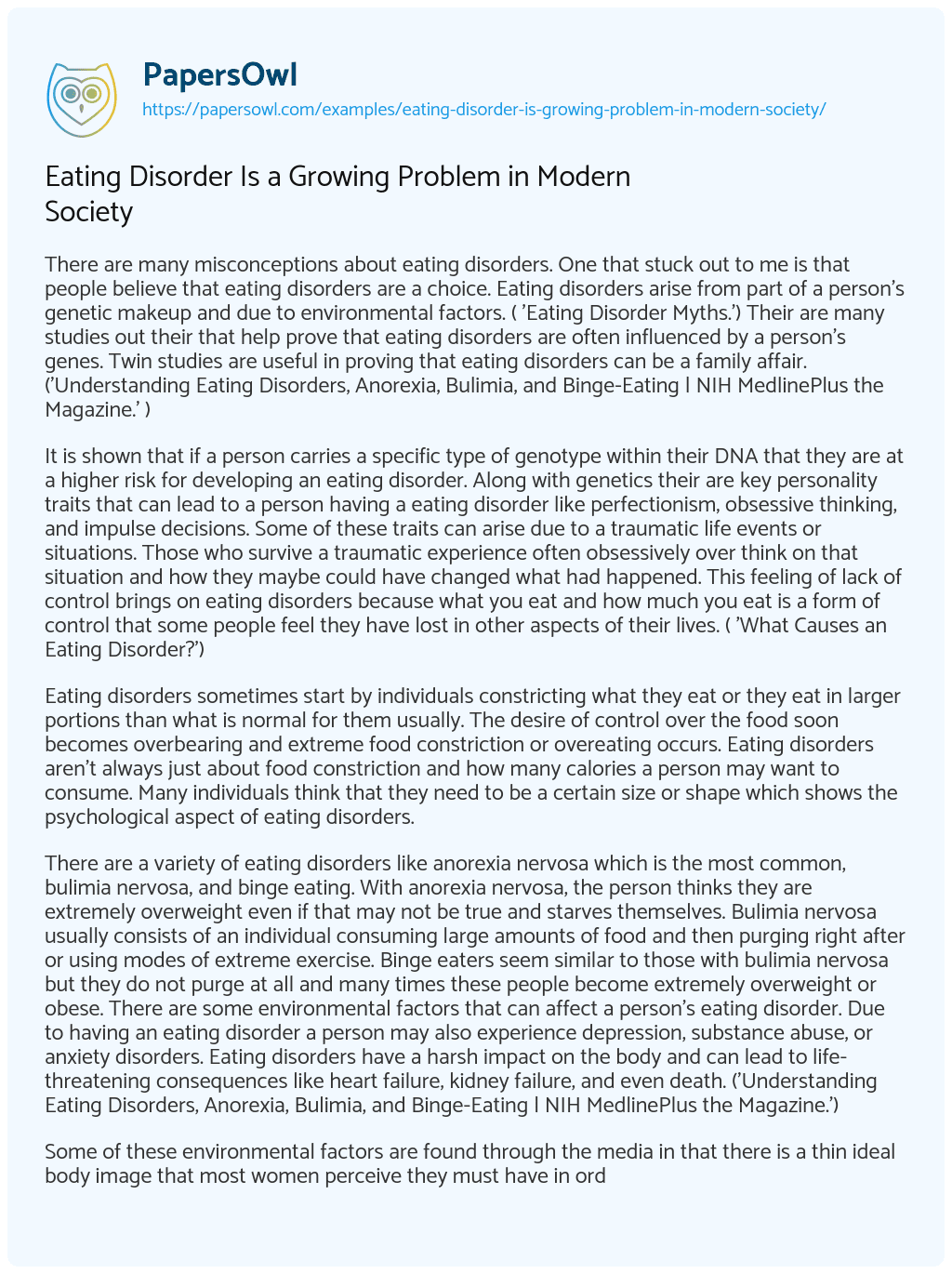 It is shown that if a person carries a specific type of genotype within their DNA that they are at a higher risk for developing an eating disorder. Along with genetics their are key personality traits that can lead to a person having a eating disorder like perfectionism, obsessive thinking, and impulse decisions. Some of these traits can arise due to a traumatic life events or situations. Those who survive a traumatic experience often obsessively over think on that situation and how they maybe could have changed what had happened. This feeling of lack of control brings on eating disorders because what you eat and how much you eat is a form of control that some people feel they have lost in other aspects of their lives. ( ‘What Causes an Eating Disorder?’)

There are a variety of eating disorders like anorexia nervosa which is the most common, bulimia nervosa, and binge eating. With anorexia nervosa, the person thinks they are extremely overweight even if that may not be true and starves themselves. Bulimia nervosa usually consists of an individual consuming large amounts of food and then purging right after or using modes of extreme exercise. Binge eaters seem similar to those with bulimia nervosa but they do not purge at all and many times these people become extremely overweight or obese. There are some environmental factors that can affect a person’s eating disorder. Due to having an eating disorder a person may also experience depression, substance abuse, or anxiety disorders. Eating disorders have a harsh impact on the body and can lead to life-threatening consequences like heart failure, kidney failure, and even death. (‘Understanding Eating Disorders, Anorexia, Bulimia, and Binge-Eating | NIH MedlinePlus the Magazine.’)

Some of these environmental factors are found through the media in that there is a thin ideal body image that most women perceive they must have in order to be valuable to society. The media has a very large influence on the younger generation through social media apps like Instagram, Twitter, and Facebook. The internet has been growing rapidly with pro-eating disorder attention.

Thinspiration is a widely searched pro-eating disorder platform worldwide. This tactic includes of thin and inspiring celebrities that are shared on the internet using blogs or discussion-based websites to share photos and dieting tips or “secrets”. Most of the pro-eating disorder websites operate secretly under supportive groups that try and help get people with eating disorders to help through support groups. They turn these groups from helping people with eating disorders recover to encouraging eating disorders. Some of these websites encourage competition between people about who can lose the most weight in a very short amount of time to an extreme level of thinness. Websites target young adolescents, mainly females, by encouraging eating disorder behaviors without fully engaging in it to try and get young girls addicted to these unhealthy behaviors. ( Lewis Stephen) Some of the first ways many people learn about pro-anorexia websites and thinspiration is from apps or ads on social media websites. The “thigh gap” was one of the most recent pro-anorexia movements to lure young adolescents into habits averting to extreme thinness.

The “thigh gap” was classified by a person standing with the ankles touching and having a small gap between the thighs. The “thigh gap” was a confirmation to people of who was deemed to be skinny and who was said to be fat. Social media sites became flooded with images of girls who were said to be perfect in aspects that they had a “thigh gap”. ( Cruz, Deborah) Thinspiration is continuously growing in the social media world with different aspects of how people should look every year. These websites drag adolescents into their sites by presenting pictures of people like celebrities that people admire who match the images of eating disorders and how people can one day look like these famous celebrities. Although in most cases this is nearly impossible for the average human.

Anorexia nervosa is one of the biggest eating disorders that targets young women. Although men can have an eating disorder women are more susceptible to them. Anorexia nervosa has some defining characteristics that set it apart from other eating disorders. This type of eating disorder is mainly characterized by restricting food intake and a fear of gaining weight. Anorexia affects as many as 1.2 to 4.2 % of females worldwide. Many girls idolize celebrities and use the media to find celebrity images to keep them motivated to restrict eating habits. Most of these young girls who admire celebrities use celebrities to inspire their dieting and exercising habits. This is how young females get hooked on the idea that social media and what celebrities do is what everyone should be doing. Some of these images that people find of celebrities promote healthy eating and exercise but there are also images and magazine covers or articles that secretly promote behaviors of anorexia. These pro- anorexia articles promote negative body perception and increase a person’s idea of being overweight. ( Yom, Tov,)

Anorexia is widely celebrated as a lifestyle on many social media platforms. Tumbler which is a site used by many of the younger population which includes photos and blogs has a very popular article that contains a blog of one month with an eating disorder. This blog has millions of views and is saved by many viewers which in the blog shines a positive light and perspective on anorexia. Many photos on these tumbler sites show very underweight bodies that are very exposed that comment on how beautiful they are and how these bodies are “dream bodies”. (Perloff, Richard.)Studies show that online there are social media communities that create groups for those with eating disorders.

There is a small group of individuals who have an eating disorder and search for a community of people who also struggle with this disease and want to recover. The other social media community for those with an eating disorder is usually a very large group of individuals who know they have an eating disorder and continue to encourage and reinforce others to continue the poor eating habits as they do. These two different communities never communicate with each other due to the fear of being forced to change the way their own community runs. Many people who suffer within these communities do not end up getting the help they need due to the fear and shame they may feel from others. These online community groups come in handy for these reasons. People who have an eating disorder remain unknown when they are online and behind a screen sometimes seeking help and other times seeking reassurance that this eating disorder is okay because many others are also engaging in this same behavior. ( Wang tao)

Eating disorders are not only influenced by social media but it is one of the biggest influential parts of today and how people value themselves. Social media is full of models who are designed to look perfect in front of the camera to influence people to buy a product that they are selling or help them make more publicity. The only way to stop social media from controlling the minds of adolescents is to get rid of it together and for people to speak up about their struggles. One day hopefully social media will be less influential in what people believe in.

Eating Disorder Is a Growing Problem in Modern Society. (2021, Nov 21). Retrieved from https://papersowl.com/examples/eating-disorder-is-growing-problem-in-modern-society/