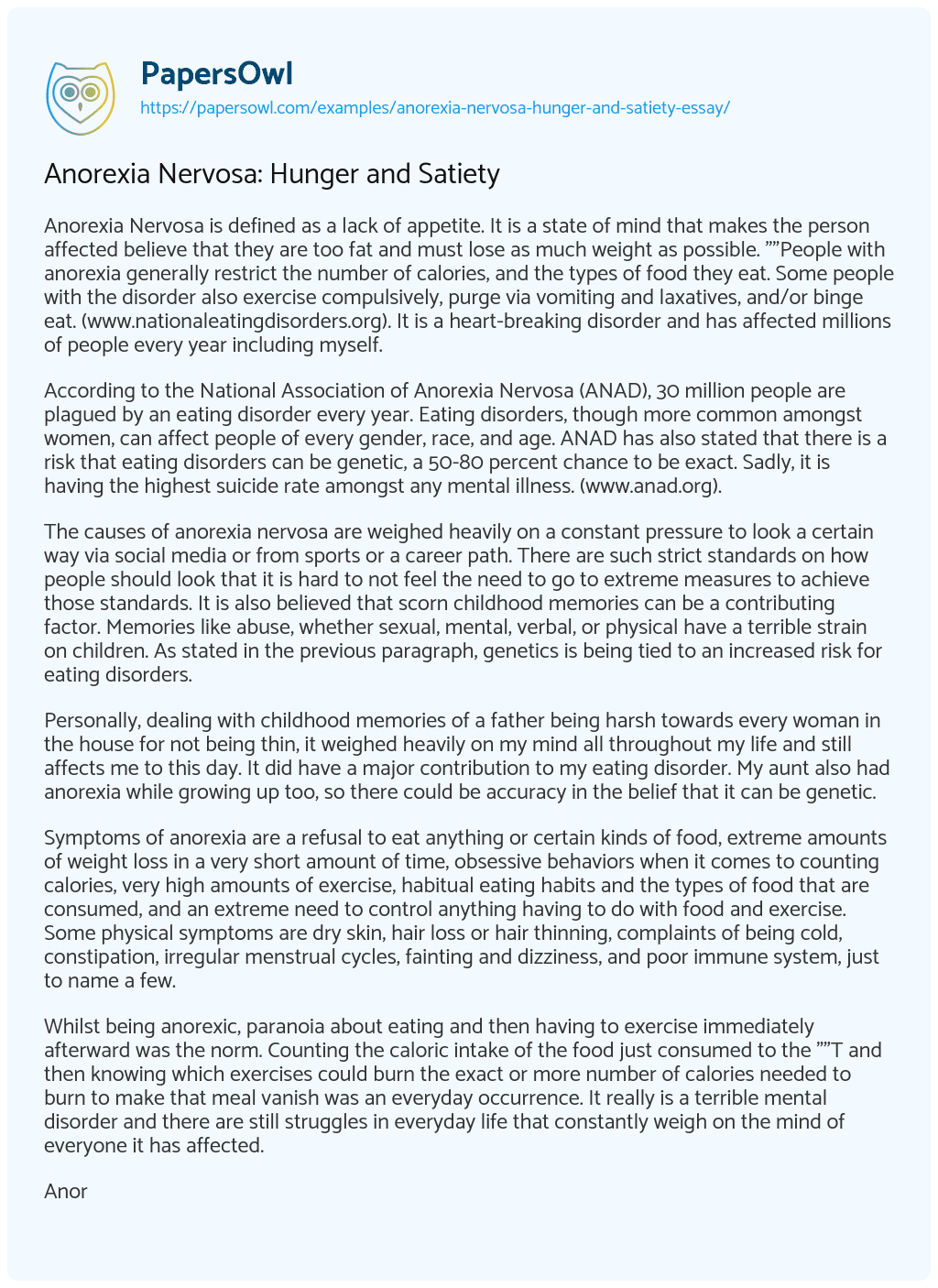 Anorexia Nervosa is defined as a lack of appetite. It is a state of mind that makes the person affected believe that they are too fat and must lose as much weight as possible. “”People with anorexia generally restrict the number of calories, and the types of food they eat. Some people with the disorder also exercise compulsively, purge via vomiting and laxatives, and/or binge eat. (www.nationaleatingdisorders.org). It is a heart-breaking disorder and has affected millions of people every year including myself.

According to the National Association of Anorexia Nervosa (ANAD), 30 million people are plagued by an eating disorder every year. Eating disorders, though more common amongst women, can affect people of every gender, race, and age. ANAD has also stated that there is a risk that eating disorders can be genetic, a 50-80 percent chance to be exact. Sadly, it is having the highest suicide rate amongst any mental illness. (www.anad.org).

The causes of anorexia nervosa are weighed heavily on a constant pressure to look a certain way via social media or from sports or a career path. There are such strict standards on how people should look that it is hard to not feel the need to go to extreme measures to achieve those standards. It is also believed that scorn childhood memories can be a contributing factor. Memories like abuse, whether sexual, mental, verbal, or physical have a terrible strain on children. As stated in the previous paragraph, genetics is being tied to an increased risk for eating disorders.

Personally, dealing with childhood memories of a father being harsh towards every woman in the house for not being thin, it weighed heavily on my mind all throughout my life and still affects me to this day. It did have a major contribution to my eating disorder. My aunt also had anorexia while growing up too, so there could be accuracy in the belief that it can be genetic.

Symptoms of anorexia are a refusal to eat anything or certain kinds of food, extreme amounts of weight loss in a very short amount of time, obsessive behaviors when it comes to counting calories, very high amounts of exercise, habitual eating habits and the types of food that are consumed, and an extreme need to control anything having to do with food and exercise. Some physical symptoms are dry skin, hair loss or hair thinning, complaints of being cold, constipation, irregular menstrual cycles, fainting and dizziness, and poor immune system, just to name a few.

Whilst being anorexic, paranoia about eating and then having to exercise immediately afterward was the norm. Counting the caloric intake of the food just consumed to the “”T and then knowing which exercises could burn the exact or more number of calories needed to burn to make that meal vanish was an everyday occurrence. It really is a terrible mental disorder and there are still struggles in everyday life that constantly weigh on the mind of everyone it has affected.

Anorexia can cause multiple short and long-term health problems. Short term issues include gastrointestinal problems like constipation and bloating, menstrual problems life a delayed period or no period at all, and many more. More long-term issues are osteoporosis due to a lack of proper nutrients to the bones which then causes them to become brittle. Women with anorexia are more likely to develop issues with becoming pregnant later in life due to hormone imbalance. Heart issues can develop due to a long-term battle with anorexia. When the body does not get the vitamins, mainly fat, it is very unlikely that it will work properly. Fat is extremely important so that it can protect the heart and other organs from damage. Fat helps the in the body, circulation of the blood becomes difficult. Thus, the heart must work in over drive to maintain homeostatic environment which can cause severe damage (Newbridge Health).

The prognosis of anorexia is good, but still not great. Many women fail to recover and thus succumb to medical complications from the disorder or suicide. If the person affected does not receive the proper care, it could be fatal. It is said that upwards of every 63 minutes, a person suffering from an eating disorder dies. According to the National Association of Anorexia Nervosa and Associated Disorders (ANAD), “”1 in 5 anorexia deaths is by suicide making “”eating disorders have the highest morality rate of any mental illness(www.anad.org). It is not all sad, though. Many of the suffers recover and have very little health complications. In fact, well over half of all suffers make a full recovery.

Treatment can range from speaking with a therapist to a full-on center dedicated to eating disorder recovery. There is also hospitalization for severe cases that require extensive measures like feeding tubes and fluids because the patient is that starved and dehydrated. Most cases do not require such drastic measures, though. There are also medications like anti-depressants and anti-anxiety medications. Also, there are anti-vomiting medicine for those with chronic bulimia episodes associated with their anorexia. Nutritionists are a great tool to help with easing the fear of food.

The best help is support groups. Knowing that there are others out there suffering and they can offer advice on certain issues, is truly comforting. There is a saying that one cannot fully understand something unless they have been through it themselves and that applies majorly to eating disorders. “”With treatment, 2 3% of people with anorexia die, demonstrating just how effective professional treatment can be. (Mirror-Mirror).

As someone who suffered from an eating disorder for well over a decade, it is of utmost importance to find help and get it early on. Receiving that help can help prevent a lot of detrimental health issues later in life. It is a mental disorder, though, so whenever stress comes about, or bad things happen in one’s life, there can be flare ups. Being four years into recovery, there are still times when life gets tough and relapses occur. Get back up and start again! Don’t live in the eating disorder mind set for too long. There will always be the nagging voice inside, but it does dull with time.